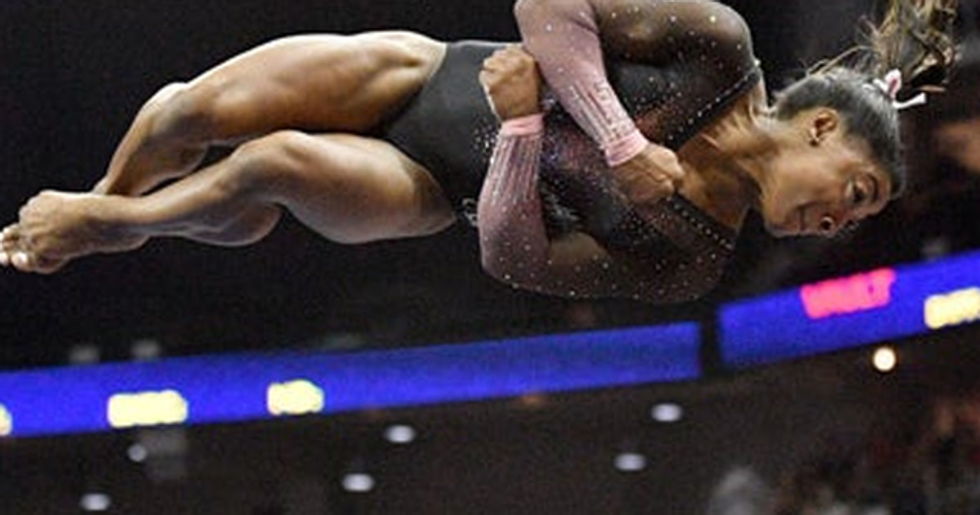 You may or may not have heard, but Texan gymnast, Simone Biles, made history last week when she became the first-ever gymnast to attempt, and successfully land, a double-double dismount from a high-beam. Oh, and she also became the first woman to ever land a triple-double in competition during her floor routine. All in one week.

And now, fresh footage has emerged online, which shows one of her routines in super-slow motion and... you can just picture it, can't you? The footage is incredible and it makes us all wonder whether this girl has some form of super-human power.

Keep scrolling to see the video, which will put you and your stiff joints to shame.

And, just last weekend, the gymnast returned to our headlines.

On Saturday, at the 2019 U.S. Gymnastics Championship in Kansas City, Missouri, the 5-time Olympic medalist made history by becoming the first-ever gymnast to land a double-twisting, double somersault dismount from the balance beam in a match.

Commenting on her incredible victory over the weekend, Simone said: "It wasn't as good as in training. I'm just happy that I landed it because I feel like after night one my confidence got shot down. So I was really worried about it going into today, that's all I could worry about. So I was really happy."

And others felt that an apology was in order.

We are not worthy!

Though we are feeling very confident for the 2020 Olympics...

If Biles has anything to do with it, America is going to bringing home that gold. Though she isn't the only gymnast who has made headlines of late. Katelyn Ohashi, from UCLA, caught the world's attention earlier this year with her stunning routine, which some have argued gives Biles a run for her money. Keep scrolling to see, and to decide for yourself, who the real champion is.