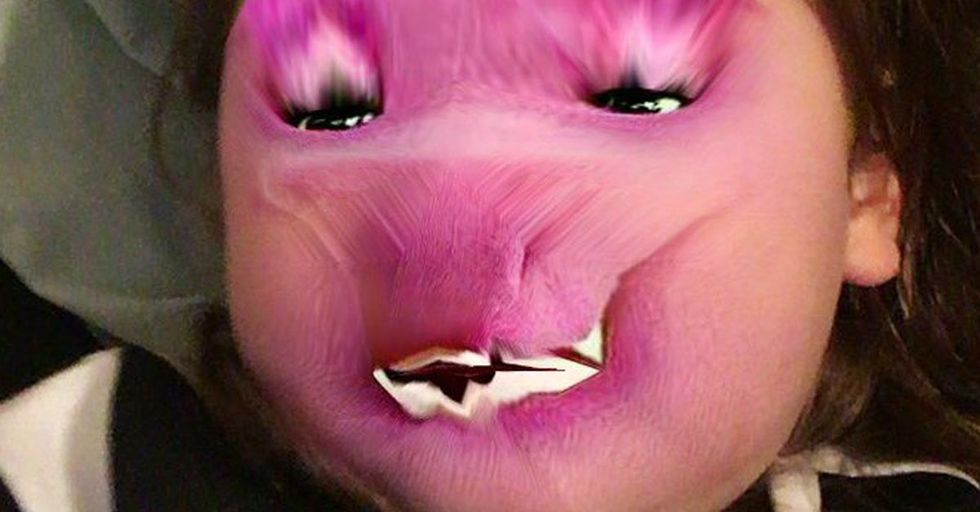 29 of the Most Horrifyingly Hilarious Snapchat Fails of All Time

There's a lot to love about Snapchat.

It's a great way to keep in touch with your friends, update your followers on what you're up to, and — of course — do something absolutely hilarious. In most cases, those hilarious photos and videos are lost forever...

Unless you upload them to the Internet for everyone to enjoy.

Some of the funniest Snapchat posts of all times are actually, technically, fails.

But can something really be considered a fail, if it makes people laugh?

As long as no one is hurt, I don't think so. Here are some of the best Snapchat filter fails available on the Internet today. Enjoy!

That's not a face.

The face swap Snapchat filter is kind of notorious for messing things up in a big big way (you'll notice a lot of face swap failures on this list). I can't even begin to understand what happened here.

Obviously, he was going for the face on the potato chip bag. But Snapchat had other plans.

Hey, Snapchat? This is not OK.

This is an attempt at a face swap with a picture of Obama.

This is just horrifying.

You know it's a bad face swap when both people turn out completely terrifying. This is a haunted image to be sure.

It's like sometimes Snapchat sees a face and is just like: "Ya know what? I'm gonna do ya one better."

Dear Snapchat, A fist is not a face. Sincerely, everyone.

There's no face there. How could this possibly happen?

Sir? I'm not quite sure how to tell you this, but, um, your baby is haunted.

So that's why they call Disneyland the most magical place on Earth. That's some dark magic, though.

Can we all just agree to never do face swaps with babies ever again for the rest of time? OK. Thanks.

I think this might be a little NSFW. Apologies to our younger viewers, but really, I blame Snapchat.

Snapchat, you are drunk.

There's a face. Right. There. I'm cutting you off, Snapchat. You've clearly had enough.

I know we agreed to no more baby face swaps.

Could we also just maybe not do any filters on babies? It's starting to disturb me.

Not as much as this does, though.

This is not what I thought Deborah meant when she said she was a cat person.

In fact, they may actually be worse? I can't really tell. Both are v bad.

Why do I get the feeling that this is the first Snapchat face swap most dads would try?

No one is safe.

To be fair, this is much funnier than the intended face swap would have been. Good job, Snapchat. For once.

The stuff of nightmares.

And that's why I decided to delete the Snapchat app, turn off my phone, and throw the whole dang thing into a river.

I hate you. You hate me. We're a haunted family.

I wish I could stop looking at these.

They're funny, but... They also hurt my soul.

Remember everything you ever loved about your childhood? Yeah, well, you can just forget it. It's all ruined.

I demand an explanation for this, Snapchat. You have gone too far.

OK, I actually love this one.

Haven't we all wished to be the fur on a puppy's belly? No? Just me?

You know how some people start to look like their pets?

Ah, finally, the answer to the age-old question: Who's a good boy? The answer is, Neither of these beings.

I'm gonna have to talk to Grandmother Willow about this.

Obviously, she just hasn't figured out how to paint with all the colors of the wind. I'm not sure she ever will.

From this picture. From me, it's gonna be 3,000 thumbs down, actually. Share this with someone whose snaps always make you smile!