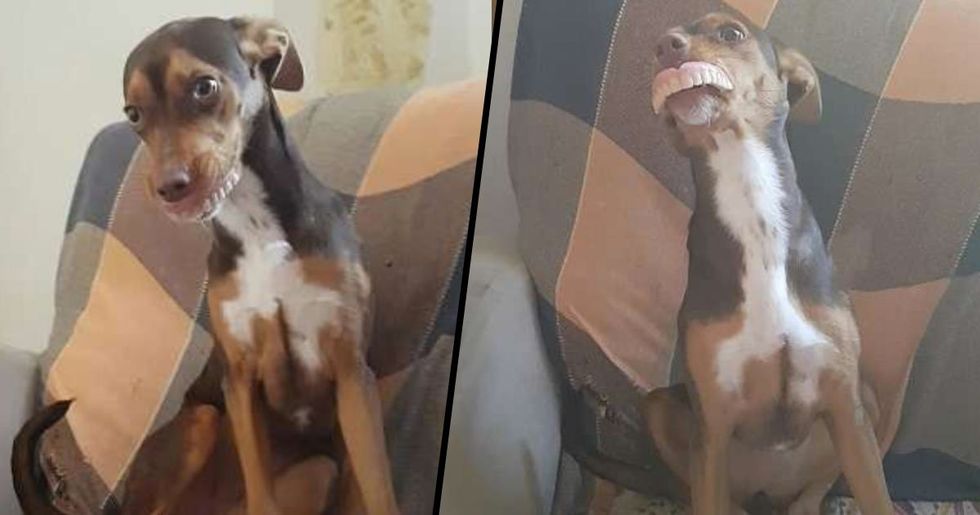 No matter what mischief they get up to, when it comes to our beloved doggos, they can pretty much get away with anything.

It's certainly no secret that our furry friends like to steal things. Whether its hair ties, food, or the mail, nothing is off-limits in the eyes of our 4-legged-friends.

But for one particularly trouble-making pooch named Luna, it was dentures she had her eyes set on. When her owner was visiting her grandma, Luna (after suspiciously being nowhere to be seen) stole her grandmother's dentures and proceeded to run off and wear them.

Luna's owner captured the hilarious moment she was caught donning the false teeth in a series of snaps.

Keep scrolling to see the mischievous dog getting caught in the act.

Our dogs never fail to entertain us.

Whether they're begging us for snacks, stealing our mail, or photobombing us, there's no shortage of fun when you're a dog parent.

From ripping up the couch to getting their heads into the treat cupboard, they often find themselves in trouble.

And even when they try to cover up their tracks, their guilty faces make it painfully obvious who the furry culprit was.

For many of us, our dogs have also taken a liking to stealing things.

From hair ties to our own lunch, whatever is ours is theirs... in our 4-legged-friends' eyes anyway.

No matter how troublesome they've been, they usually get away with it.

Any hint of those puppy dog eyes and our hearts are melted.

But there's one dog who's sneakiness is topping the ranks.

Her doggy antics have made for pretty hilarious snaps. Keep scrolling to find out what she did that landed her in trouble.

The adorable pooch was rescued by Anna Carolina Lima and her fiancé in Brazil a few months ago.

They are smitten with her.

And it seems the feeling is mutual, as the happy doggo is always smiling.

During a recent visit to Lima's grandma's house, Luna got up to quite a bit of mischief.

Luna quickly got settled into the house, so it didn't take long before Lima felt fine leaving her unattended.

Although this proved to be a big mistake...

Turns out that being well-behaved couldn't have been further from Luna's mind.

As Lima left the house, her grandma seized the opportunity for a nap...

"As usual, she put her dentures under the pillow so as not to lose them," Lima explained.

But, unbeknown to her, Luna had her eye on the false teeth.

And as you probably guessed, when her grandma woke up, her dentures were nowhere to be seen.

Meanwhile, coincidentally, Luna was nowhere to be seen. "She was pretty desperate that she couldn't find her dentures," Lima explained. "She and my mom searched everywhere. They searched for hours." So, naturally, Lima decided to check in with Luna...

The mystery was solved. "I found Luna sitting in the armchair with Grandma's teeth in her mouth. "She didn't want to give them back!"

The sneaky pooch was caught in the act.

Not only had she stolen the dentures, but she was now wearing them, making for both a slightly creepy and hilarious spectacle.

After some negotiations, Lima managed to prise them away from the 4-legged thief.

Fortunately, the dentures hadn't been damaged by Luna donning them. We anticipate Lima's grandma will be keeping more of a watchful eye on her false teeth next time Luna's in town. Want to read more about man's best friend? Keep scrolling to learn about the trendy new garment for our 4-legged pals.