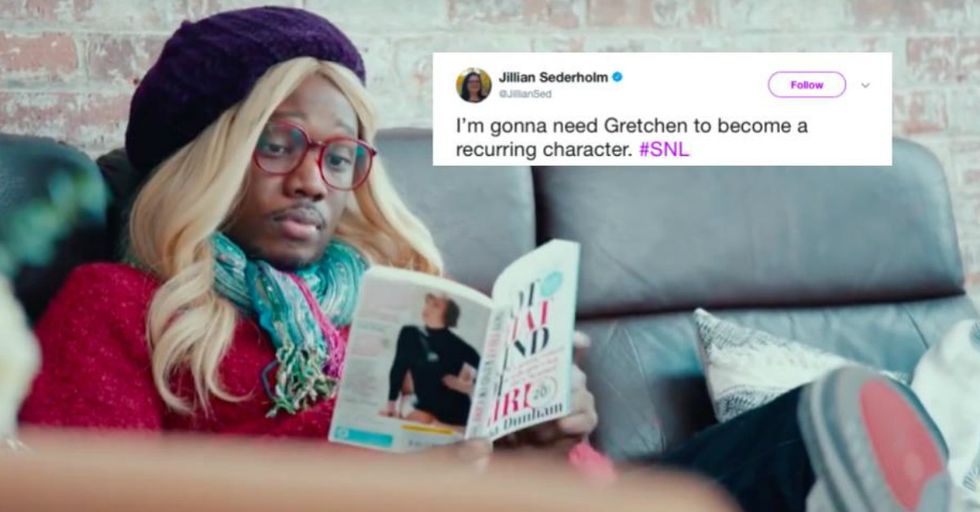 This weekend, James Franco hosted Saturday Night Live. It was his fourth time hosting the show, a fact which he and his friend and frequent collaborator Seth Rogen commented on numerous times during the cold open. Rogen, for the record, has only hosted SNL twice. This seems a somewhat strange oversight.

The theme of the day was liberals and sexual assault.

SNL has long been accused of having a liberal bias.

During a 2012 interview, in fact, podcast host Bill Simmons asked then-headwriter Seth Meyers, "Would you say that you skew toward being more of a liberal show? I think that’s a fair statement, right?" "I think you could certainly make the argument…" was Meyers reply. "Yes, there are more liberal people involved in the show."

Well, said liberals were up on this weekend's SNL, with one of the first skits riffing on the Harvey Weinstein scandal, which has torched through Hollywood and several different industries.

In the first skit "Sexual Harassment Charlie," a somewhat blatant critique of the political pillorying of democratic senator Al Franken, Franco plays Doug, the CFO of a company fired for harassment alongside Kenan Thompson's Charlie, the front-desk worker.

Both men have been called up to apologize for their actions.

Franco's case, on the surface, seemed more benign. He was commenting on women's outfits and asking them to smile more – actions for which the women were rightly infuriated.

Thompson, however, had issued numerous and several gems of misogyny.

"If I was 11 years younger," Thompson's character opined to one of the women, "I'd put you in a large sack, throw you in the trunk of my Eldorado, drive you to my sister's house with a big old medical bed, crack open the windows and show you a good ol' time for 28 minutes." Thompson seemed enamored of doing things for 28 minutes precisely, for no clear reason.

But the women weren't at all disconcerted by his alarming statements, which were declared in a genial manner.

"That's my loss, Charlie," Leslie Jones, one of the women, answered – the overwhelming consensus among the women for Charlie's horrific actions being, "That's just Charlie, he's a sweet old man."

In fact, it's revealed in the end that the reason behind Charlie's firing is not sexual harassment.

Instead, it was stealing from the company, cocaine use, and pornography on company computers. You know, less worrisome matters.

The most talked about skit, however, involved "Weekend Update" co-host Michael Che.

Che shared that while most of his commentary as "Weekend Update" host was controversial, to be sure, he didn't get most of his hate mail from the usual sources. Instead, he got it from "very liberal white women."

So Che decided to do what every serious journalist must – he went out in drag (sans makeup, because white-face is so passé) to "try to see things from [a super liberal white woman's] perspective."

"So I decided to walk in their shoes the best way I knew how, by going undercover as a white woman named Gretchen," Che said as part of his statement of purpose.

It wasn't an easy process. It took applying crocheted hats, numerous scarves, and a blond wig.

After this whole ordeal, Che was ready. But there were a few more things he had to do. "I went on Yelp, I read a bunch of Huffington Post articles, I listened to the most ignorant rap music I could find, I read Lena Dunham's book, you know, white woman stuff," Che said.

Now that the disguise was complete, the host was ready to take on the world as a liberal white woman.

One of his first tasks, Sunday brunch with other white women and a discussion about Meghan Markle's engagement to Prince Harry. To this ultimate test, Gretchen declared, "I don't mean no disrespect, but I just feel that the monarchy is literally the patriarchy. As a liberal white woman, I can't support that shit."

But Gretchen wasn't done just yet.

She had to confront man spreading on the New York subway – "Yo, move your leg, man" – and even *gasp* white male privilege.

When a white guy at a dinner mansplained that "white men have it just as hard as anybody else," Gretchen quickly responded, "Check your privilege, dude!"

Gretchen even had to confront that most alarming of circumstances, being in an elevator with a random white dude. She handled it with aplomb, of course, holding her purse closer to her body, and turning away from him.

In the end, Che learned that white women want what everyone wants.

"Equality, respect and wine in the day time with no judgment." Amen.