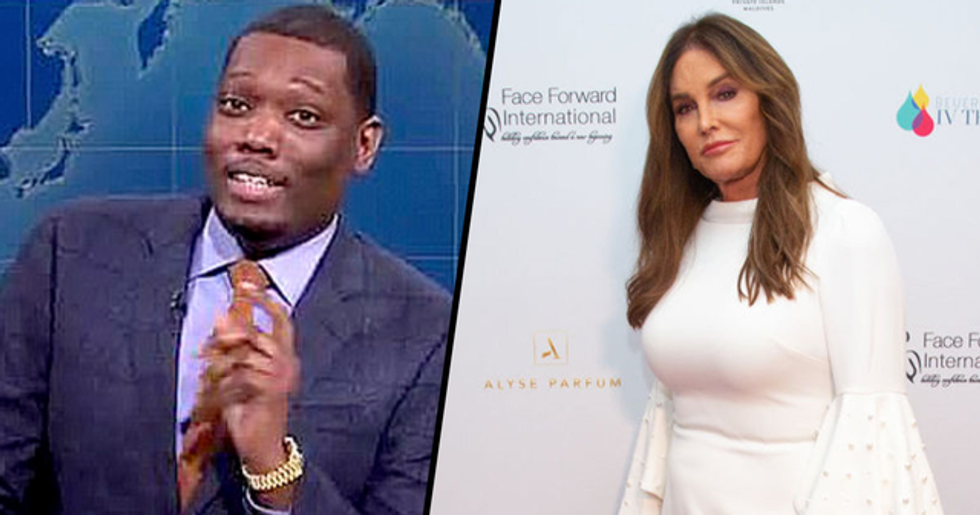 Since then, Caitlyn has become a global ambassador for trans people and has been happily living out her life as an open and proud trans woman.

But, sadly, Caitlyn has received her fair share of hate. Many comedians have used her transition as the butt of their jokes, and have thus being labeled as transphobic for doing so. And the latest to fall under the transphobia label is Saturday Night Live host, Michael Che.

Che made a questionable and a rather unfunny joke regarding Caitlyn's transition, and people are not happy.

We all remember the famous Caitlyn Jenner transformation.

Bruce Jenner became a huge part of the bizarre public spectacle that is Keeping up with the Kardashian's.

He came into Kris’ life after the death of her first husband, attorney, Robert Kardashian. He had 2 children with Kris, Kendal, and Kylie, and was hastily blended as a significant father figure to all the Kardashian sisters.

And, in true Kardashian-Jenner fashion, she revealed herself on the cover of Vanity Fair. People marveled at the impressive transformation, which had eliminated any traces of the previous Bruce Jenner.

She was a completely new woman.

And she underwent her final operation – the irreversible sex-reassignment surgery – in 2017, officially marking the death of Bruce, and the birth of Caitlyn.

In her debut Vanity Fair interview as Caitlyn, she explained how liberating it felt to finally be open as a woman. “I have nothing left to hide. I am kind of a free person, a free soul. Up to this point, I would wear, you know, Bruce would wear sweatshirts with hoods on them so paparazzi can’t get pictures and all that kind of crap."

When asked about sending a full private airplane out just to pick up her Mom, Caitlyn explained: “I know. What I told her, 'Isn’t Caitlyn a much better friend? Bruce, he would never send a plane. No, no, no, what a jerk the guy was, okay, Caitlyn is like, “Send the plane. Mom, we’re sending a plane, we’re going to go pick you up and bring you down here.'… It seems like she has a lot more friends than he ever had."

The shocking transition understandably took its toll on her daughters, Kendall and Kylie. For the 2 girls, the birth of Caitlyn meant the loss of their dad as they knew him.

Kendall has opened up about her dad's transition in the past.

“My dad says it herself sometimes, it’s kind of like mourning the loss of someone, because it is," Kendall said in a candid interview about the birth of Caitlyn. “My dad is my dad, but he’s not there physically anymore. But she lets me call her dad — that’s the last little piece of dad I’ve got."

And the supermodel insists that she's known about her dad's gender identity for years.

“It’s an adjustment. It’s something you have to get used to. But I’ve known since I was a kid," Kendall revealed in the same interview. “He never confirmed it to me, but I’ve known for a very long time. It’s the same person."

Caitlyn's transition inevitably caused a strain on her relationships...

As for any family, someone you love transitioning into completely new person is bound to cause some tension.

But there has also been some tension with various other public figures...

Who have been dubbed as "transphobic" for their comments on her transition.

Many comedians have made fun out of Caitlyn's transition.

Including Kendal's ex-boyfriend, NBA star, Blake Griffin, who famously roasted the hell out of her at the Comedy Central Roast of Alec Baldwin.

But now, the latest man to fall under the "transphobia" fire is the Saturday Night Live star, Michael Che.

The actor and stand-up comedian, who serves as co-anchor on Weekend Update and co-head writer alongside Colin Jost, is usually a very popular addition to the show.

However, he has now been slammed for his recent comments regarding Caitlyn Jenner.

On the latest edition of the NBC comedy staple, the New York native, thirty-six, referred to Jenner while speaking about Kanye West and his recent creative turns.

He began by gently roasting Kanye.

Because who doesn't love a good, old fashioned Kanye West roast? "At first I thought Kanye was losing his mind, and now I feel like he's fine, he's just turning into an old white lady,' Che said. "I mean, he used to be one of the coolest black dudes on Earth."

But he changed direction...

"Now, you might think that I'm crazy," Che said in the segment, which was accompanied by a shot of Caitlyn prior to her transition when she was known as Bruce. "But about 5 years ago, there was a fella named Bruce Jenner, and he moved to Calabasas…"

Michael Che about to try out the transphobic joke he was working on all week https://t.co/IffXdKyMRN
— Will Long (@Will Long)1572151427.0

The studio audience gave Che a mediocre reaction to the joke as his co-host Colin Jost noted, "That's pretty much ended, yeah that's great," while concealing his face out of embarrassment.

Many were quick to slam the comedian for his tasteless joke.

And people quickly labeled the hosts and the show as transphobic.

But some defended Michael...

I'm defending Michael Che. He did NOT deadname Caityln Jenner. He referred to "Bruce Jenner" back when she WAS Bruc… https://t.co/XKEwuqye8T
— Slothy McSlothFace (@Slothy McSlothFace)1572298567.0

And noted that the comedian referred to Caitlyn as a "fella" only when referencing Bruce Jenner.

You can decide for yourself here...

Caitlyn is yet to respond to Michael's jibe but has confronted comedians over their transphobic remarks in the past. Keep scrolling to read about the time she called out Jimmy Kimmel for his cruel comments... On his show!