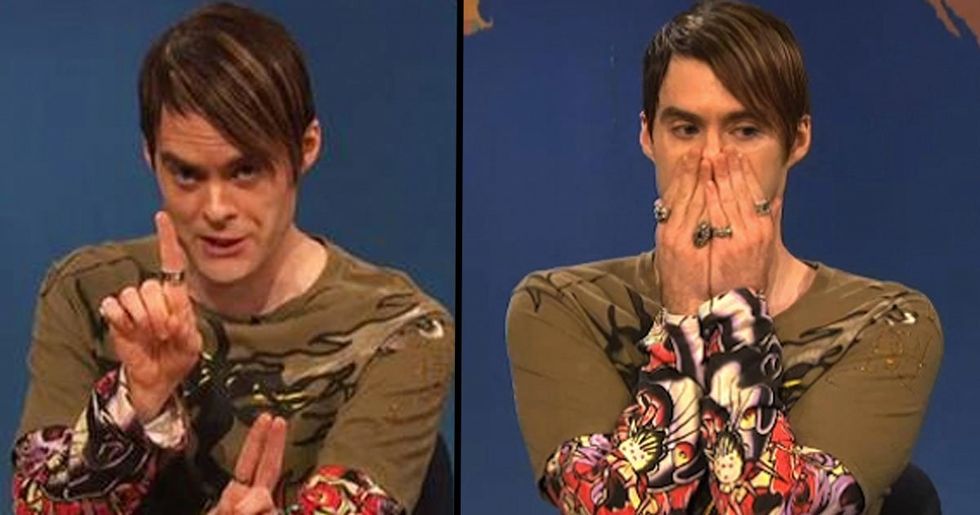 SNL is basically an American Institution at this point. Think of a famous comic actor of the past years and it's hugely likely they will have got their start on the late-night variety show. Since it's premiere in 1975, it's given us way too many iconic moments to count.

But one character who's stood out above the rest has to be Bill Hader's incredible Stefon. The New York City expert gave us some of the most incredibly creative descriptions of counter-cultural nightlife ever. But the best part? How often Hader broke character and started laughing at the absurdity of what he was saying.

Since 2013, Stefon has unfortunately left the show along with Hader. But now SNL has released a 5-video series of every single Stefon appearance. Prepare to lose over an hour of your life.

But when it comes to famous SNL characters?

There may be one who stands out above the rest. Bill Hader's Stefon was an absolute fan favorite during his run on the show.

He's starred in a ton of total classics, including Pineapple Express, Superbad, and Forgetting Sarah Marshall. He's also taken on some more dramatic roles, like the grown-up Richie Tozier in It: Chapter 2.

Bill Hader got his first break into the comedy scene on SNL, working on the show from 2005 until 2013.

And of Hader's SNL sketches ...

There was none more iconic than Stefon. The self-proclaimed "New York City correspondent" was an absolute joy to watch since his first appearance in 2008.

The amazingly out-there descriptions of NYC nightlife. "Visions a dying gay man would have if he was under too many blankets," anyone?

But there was one thing fans loved even more.

Bill Hader often couldn't quite hold it together during his Stefon monologues and ended up bursting out laughing midway through a sketch.

Hader was leaving SNL - and with him, Stefon.

And all we were left with?

But now we've got some very exciting news.

SNL has finally decided to put every single Stefon appearance together - meaning everything is in one place.

ANd the internet was understandably thrilled.

We can't believe we've waited this long to relive our favorite Stefon moments!

Because let's face it.

SNL hasn't been the same without him!

Fans have been absolutely desperate to see him again.

And it seems SNL has finally answered our prayers.

Well, kinda. It's not exactly new Stefon content. But it's way, way better than nothing.

Fans are patting themselves on the back.

Finally getting SNL to listen and compile all of the Stefon magic into some easily accessible vids is truly great news.

Sure, it'll take you some time to catch up. But that's time well spent!

Although there is one downside.

Tomorrow SNL will post last part of Every Stefon Ever and my nights will get super lonely https://t.co/0ltekrGi4l
— Natsuno Tori✨ (@Natsuno Tori✨)1573241024.0

Once these videos have been consumed, that might be the end of Stefon news forever!

Here are the videos you've been waiting for.

They were released in a 5-part series over the past few days on the official SNL YouTube channel.

Each is around fifteen minutes long.

Which means there's now over an hour of free Stefon content ready for your enjoyment.

And viewers are loving it.

"Has SNL finally realized how much everyone loves Bill Hader?" wrote one commenter. "Cards Against Humanity needs to come out with a Stefon expansion pack," laughed another.

That uber-tight Ed Hardy shirt combined with oddly shiny highlighted fringe is everything to us.

Want more iconic SNL content? Keep scrolling for the surprise appearance by Jason Momoa that had everyone in stitches.