'SNL' Writer Responds To Trump's Tweets Like They're Texts, and It's PRICELESS | 22 Words 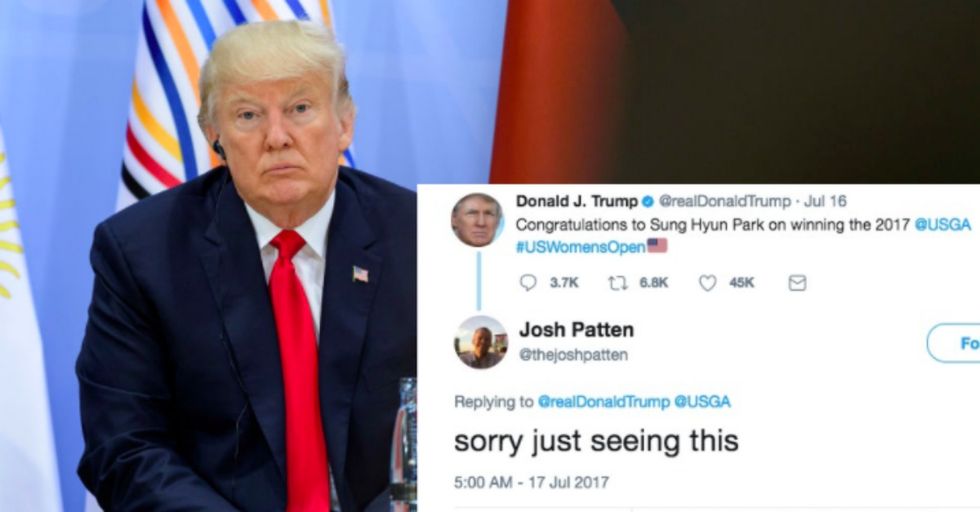 'SNL' Writer Responds To Trump's Tweets Like They're Texts, and It's PRICELESS

A round of applause for Josh Patten, everybody.

The SNL writer, much like everyone else, was a little bit at a loss when it came to how to respond to the late-night or early morning Twitter musings of our president, Donald J. Trump. So, he decided to start replying to Trump's messages as if they were texts.

Patten announced his project on July 16, though he'd already been at it for a few days.

Yes, it might be "incredibly stupid" (Patten's own words). But it's also beautiful poetry. An art installation of the highest brow. It gives Andy Warhol a run for his money.

That's odd because hours before, he was promoting Don Jr.'s appearance on Fox News. But yeah, you gotta watch Stranger Things. You gotta.

"Def chk out the mona lisa, smaller in real life but still the opportunity of a lifetime. oh and eat all the crepes babyyyyyy"

Patten's always there with the best suggestions for experiencing the culture of wherever the president is going to be. What a mensch.

"Oh, you're heading to D.C. to have confidential meetings concerning the security of our nation? Awesome, I went to the zoo there once."

He might as well have written, "Have fun, Donny. Don't forget to text me when you're home to let me know you're safe. Love, Mom"

Ooh, this one is awkward. I don't think this was an invitation...

From the WH: Mr. President was reportedly fuming, pacing the halls, and screaming the night of July 16 because Mr. Patten hadn't yet responded to his tweet about the golf tournament.

The Polls Are Wrong

I'm sure that dinner was almost as delicious as all the illegal stuff Trump and Putin talked about in their secret meeting!

Wow, Donald, maybe try not to be so braggy. Not all of us can have lunch at the White House with a bunch of old white men to discuss how to take women's rights away under the guise of health care regulation :(

If the Senate has 51 votes but they need 60 votes to repeal and there are eight Dems controlling the Senate, how much does Mitch McConnell look like a sad turtle?

Oh, hey, Donald, sweetie, no. No, that's not politics. It could have been illegal.

A Lot To Process

A lot to process, indeed. Like this whole presidency, for instance. Thanks, Josh Patten, for the momentary levity.