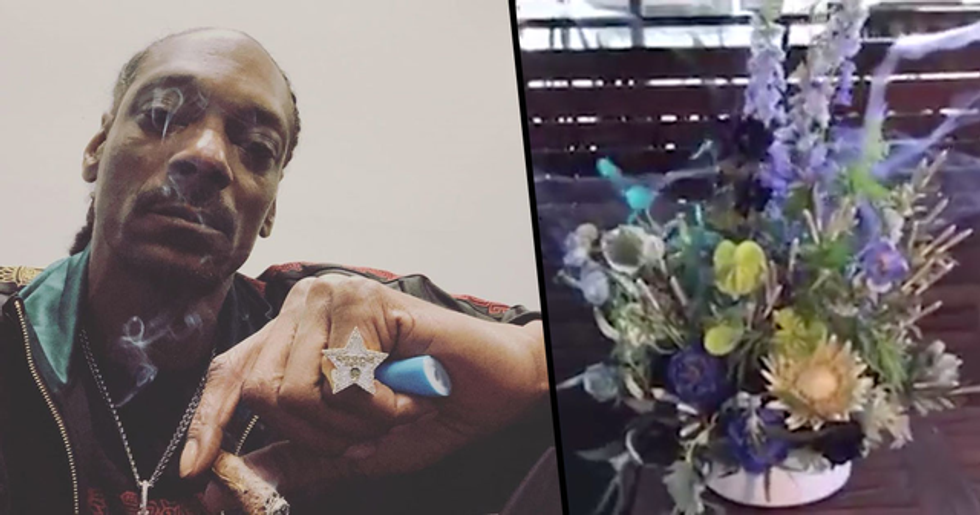 Snoop Dog Gets 48-Joint Weed Bouquet for His 48th Birthday

I can guarantee that most people will recognize Snoop for the latter. Snoop just loves the green stuff, and he is very rarely seen without a cheeky blunt in his hand. So, it will come as absolutely no surprise to any of you that Snoop received a marijuana flower bouquet complete with forty-eight pre-rolled joints for his forty-eighth birthday... And it is just as ridiculous looking as you'd imagine any weed bouquet to be.

Because he even has his own blunt roller around the house, to provide him with those much-needed joints whenever he fancies one. That's not a bad set up, is it?

And on Sunday, Snoop celebrated his forty-eight birthday.

Forty-eight whole years of Snoop Dogg. What a time to be alive.

So it should come as no surprise to any of you...

That Snoop had a heavily marijuana-oriented birthday. Obviously.

He was gifted with a magical flower bouquet.

The bouquet, which was packed with an assortment of beautiful flowers and greenery, contained something a little more magical than what initially met the eye...

Haven't spotted it yet?

Yep, there's a lot of weed in there.

The bouquet, which was carefully curated by the cannabis floral designer and artist, Leslie K Monroy, had forty-eight pre-rolled joints hidden amongst the flowers.

Forty-eight blunts to mark forty-eight trips around the sun for Snoop.

And, after this bouquet, he will certainly be going for a trip across the sun, if you know what I mean...

And the marijuana fun doesn't end there.

Half the joints are filled with Indica and the other half with Sativa, and the bouquet also includes 4 small weed clones and 8 tall clones on top of all the pre-rolled blunts. My eyes are watering just thinking about it...

I don't even want to think about his birthday cake.

But whatever is in it, I bet it tasted amazing... It sadly hasn't been all fun and games for Snoop recently. He tragically suffered the loss of his grandson and the internet mourned alongside the rapper and his family. Keep scrolling to learn more about it.