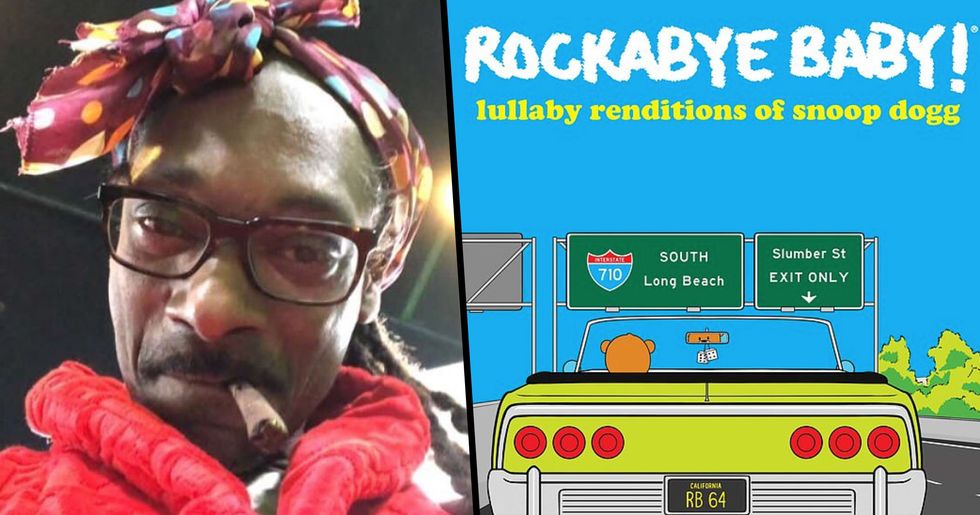 Snoop Dogg Is Releasing Lullaby Renditions of His Greatest Hits

Snoop Dogg - We love you, but there's certainly a time and a place for you.

We've all kicked back and listened to a bit of Snoop every now and again, whether it be at a friend's house or on a particularly dirty night out.

Snoop isn't exactly the most PG of artists, and his recent performance at a college basketball court certainly raised some eyebrows.

And now, Snoop has announced that he is releasing lullaby renditions of his greatest hits. Keep scrolling to learn more...

To cut a long story short...

Snoop's drug and pimp oriented music doesn't make him the best contender for family-friendly events. Well, to most places it doesn't...

Because the University of Kansas obviously thought differently.

However, it wasn't the most family-friendly performance...

Because, if there's one thing Snoop Dogg is known for, it's for his particularly un-family-friendly music.

His performance was a raunchy one...

Snoop, who took the court sporting a blue No. 20 Kansas jersey, was joined by a number of pole dancers, all clad in skimpy hotpants and vests. He performed a number of his famous tracks... All unedited and very explicit, of course.  There was even a money-gun, which fired fake dollar bills emblazoned with his face into the stunned crowd.

His performance fell short of the event's usual "family atmosphere."

And the university has insisted that they didn't plan for the show to take that kind of tone. Kansas University men's basketball coach, Bill Self spoke to reporters about what had happened.
He said, "I didn't know that there was going to be anything like that. I was told this was radio-edited and everything else... But no, that's not the direction that anybody at our school would want that to go at all."

The university even issued a formal apology.

Jeff Long, the University of Kansas' Director of Athletics, admitted that the event had not been properly vetted.
He said, "We apologize to anyone who was offended by the Snoop Dogg performance at Late Night. We made it clear to the entertainers' managers that we expected a clean version of the show and took additional steps to communicate to our fans, including moving the artist to the final act of the evening, to ensure that no basketball activities would be missed if anyone did not want to stay for his show."

Many chortled at Long's apology...

Especially when he described the pole dancers as "acrobatic dancers." You've got a lot of learning to do, Jeff...

Snoop eventually spoke out about the backlash...

Talking to Howard Stern, the rapper showed about as much remorse as you'd expect after the controversial performance.

Frankly, Snoop didn't see what the issue was.

In fact, Snoop has his own theory.

"I think it was more the publicity of what I did. They had to cover it up. And, I respect them, and I wasn't gonna put no smut on their name and say they did anything wrong because they invited me to come do what I do."

"And, when you pay for Snoop Dogg, you gon' get Snoop Dogg."

You have to respect his dedication to staying true to himself.

And this backlash hasn't stopped him from doing what he does best - making music.

His music is strictly adult-only...

But now, Snoop has decided that he wants to create music for the much younger generation.

The rapper has tapped into many different genres of music in the past...

But he's now adding another album to his long list of experimental projects, as he's put together a record full of lullaby tracks aimed at infants.

Of course, the X-rated lyrics that Snoop is so well known for will be absent...

According to The Source, the album is titled Lullaby Renditions of Snoop Dogg, and includes soothing instrumental versions of some of his biggest hits, such as "Drop It Like It's Hot", "Gin and Juice", and "Sensual Seduction".

The album has had a lot of funding...

It is being released in partnership with Rockabye Baby! Music, who are known for making lullaby instrumentals of various artists, including Drake, Eminem, and Kanye West.

The album is expected to be released on December 6...

But Snoop recently said he isn't interested in record sales, because he cares more about making music than making money.

Snoop is passionate about making music...

Asked what keeps him "hyped" about making music, Snoop said, "I love the way that good music feels. Even if it ain't mine, I just love how that s*** feels."

"But when it's mine it feels even better because I'm able to do it. I've made projects before that weren't good, but they felt good to me. And that's all I give a f*** about."

"I don't care about this sold eight million, 100,000, 22,000 or seventeen. Who cares? If you ain't doing it for the feeling, you're doing it for the wrong reasons. You should never be doing it to make money or become famous. That isn't what this game was built on," he went on to say. To keep reading about Snoop, keep scrolling to find out about his professional "blunt" roller...