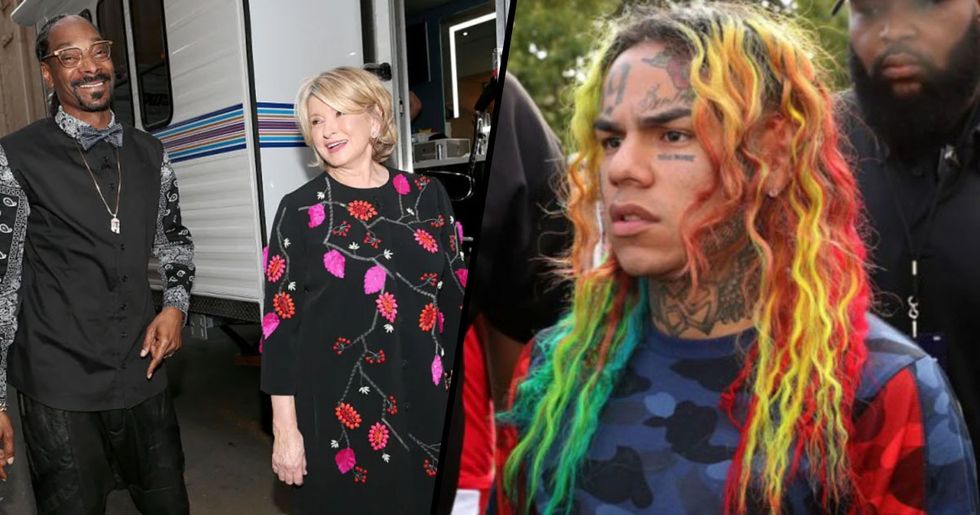 But Hernandez, who is facing at least forty years behind bars, has seemingly been quick to ditch his hardened gang persona by cooperating with federal authorities for their investigation into other members of the organization. And now, he has testified against his old gang members and even identified individuals by pointing them out in a packed courtroom.

After he snitched on his former gang members, Twitter has officially declared Martha Stewart as having more street cred than the rapper as she also found herself serving time in jail - taking a slightly different approach to the famed rapper.

Keep scrolling to read the full story that resulted in a visibly terrified Hernandez buckling under the pressure, and why beloved TV star, Martha Stewart has heaps more street cred just as Snoop Dogg proved...

Despite having a rocky start to life...

The rapper has consistently been in and out of trouble with the law.

But that all changed 1 month later.

He spent nearly 2 hours on the stand.

In a courtroom potentially filled with current or former Nine Trey members, he testified that he became a member on November 2017, and participated in violent crimes ... including shootings, assaults, and drug trafficking.

And they have publicly disapproved, both of Tekashi's actions and his snitching... Because you know what they say... snitches get stitches.

Following the scandal, Twitter has officially declared that Martha Stewart has more street cred than the rapper.

And it all boils down to one thing... choosing not to snitch, even when under pressure.

The beloved television star famously spent five months in federal prison back in 2004.

In complete contrast to Tekashi, Stewart served time behind bars because she refused to give up the names of people involved in an insider trading scandal with "ImClone Systems," a company that manufactured drugs in the U.S., mostly for cancer patients.

She managed to avoid a huge loss...

But the drugs the company was testing failed the approval from the FDA, which means shares plummeted. It was discovered that Stewart had sold four-thousand shares of the ImClone stock she owned the day before the FDA decision was announced - avoiding a loss of around $45,000 in the process.

The timing was suspicious, to say the least.

Plus, the fact that she received the information about the stock through her stockbroker, Peter Bacanovic, led to an investigation of Stewart's dealings with the company.

After a highly publicized 6-week trial, the star was convicted.

In March 2004, Stewart was found guilty of felony charges of conspiracy, obstruction of an agency proceeding, and making false statements to federal investigators, and was sentenced the following month to serve a 5-month term in a federal correctional facility and a 2-year period of supervised release.

The moral of this story?

Throughout the whole thing, the seventy-eight-year-old didn't once snitch on anyone, a reason an unlikely pal, Snoop Dog, says gives her heaps more street cred.

"That’s my. M. F. Home girl, solid as a rocc," he wrote. In simple, non-rapper terms, this means that he rates her a ten when it comes to street credit.

His point is perfectly clear.

Looks like Stewart would make it pretty far in the gang world.

And the internet seems to agree.

Like this user, who branded her a "true baddie." I'm guessing that's a compliment? In the meantime, now that we've established how good of a gang member Stewart would be, we'll sit tight and wait for the latest development in the Tekashi saga...