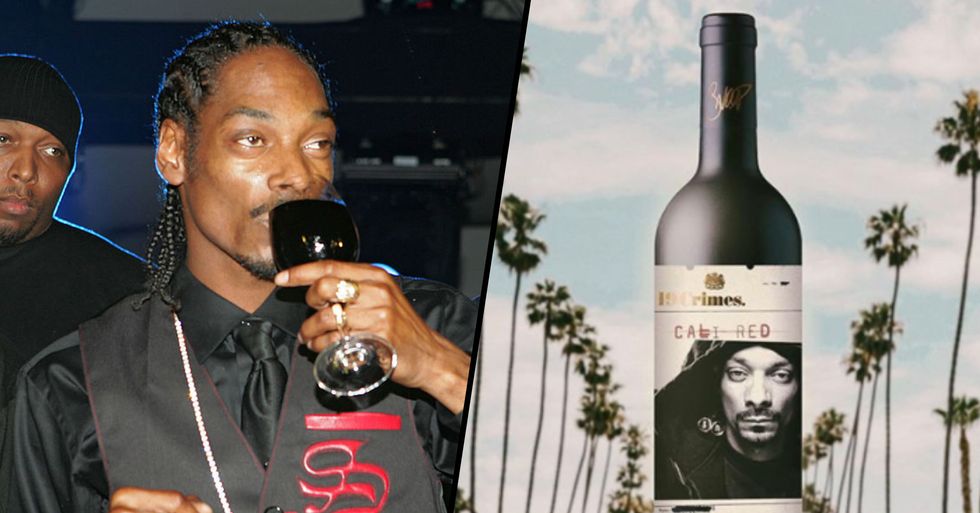 Snoop Dogg has evidently grown bored of sippin' on his gin and juice because, now, in a rather shocking career move, the rapper has delved into the world of fine wine...

Snoop isn't his real name. Would you believe it?! The rapper was actually born as Cordozar Calvin Broadus Jr. on October 20, 1971. It is thought that his "Snoop Dogg" nickname came from his mother because she thought he looked like Snoopy from the Peanuts cartoon.

If it isn't his somewhat offensive music and controversial past with his treatment of women, Snoop is perhaps most famous for his love of marijuana.

And he regularly flaunts his lavish, pot-oriented lifestyle on his social media channels.

And, all this excessive pot smoking must have given Snoop the serious munchies...

Because it turns out that the rapper is also a hugely passionate cook.

In the last couple of years, Snoop has been really immersing himself in the world of cooking.

From co-hosting cooking shows and dinner parties with his unlikely friend, Martha Stewart, to collaborating with Dunkin' to create the plant-based breakfast sandwich, the Beyond D-O-Double G, Snoop's hands are certainly in all kinds of pies these days.

And, last year, he even released his own cookbook.

Back in October, Snoop's debut cookbook, From Crook to Cook, hit the shelves.

In his book, the rapper shares an array of his favorite recipes...

From fine-dining choices such as lobster thermidor to more humble dishes such as waffles, plus a gin and juice recipe, of course.

And now, Snoop has set his horizons on the world of fine wine.

Now, we all know that Snoop enjoys a tipple every now and again, but none of us were expecting this.

But the rapper is indeed releasing his own brand of wine.

The appropriately named wine, Snoop Cali Red, is the debut red wine release of Snoop’s partnership with the Australian wine brand 19 Crimes, a selection of wines that feature the "convicts-turned-colonists" who built Australia.

It sounds like a match made in heaven to me.

And John Wardley, the Treasury Wine Estates Marketing Vice President, clearly thinks so too, as he stated on the partnership: “Snoop Dogg, an entertainment and California icon, is the perfect partner for 19 Crimes Snoop Cali Red. Snoop embodies the spirit of 19 Crimes – rule-breaking, culture creating and overcoming adversity. We are truly excited to partner with Snoop and welcome him to the 19 Crimes family."

For all you wine fanatics out there, Snoop's debut vino is a rich blend of 3 different red grapes...

Petite Syrah, Zinfandel, and Merlot... But perhaps it's biggest selling point is that it's priced at an incredible $12 per bottle. Bargain!

The wine will be available to buy this summer...

On his new project, the rapper said: "I’ve been a fan of this wine and I’m excited to unveil my ‘Snoop Cali Red’ this summer and share the experience with all my fans. It’s one of the most successful brands in the market, so I’m more than eager to bring this collaboration to the world!"

Obviously, people are very excited for Snoop's vino to be released...

I for one never thought I'd be living in a world where Snoop Dogg is a wine connoisseur. Not that I'm complaining...

Though some have pointed out the obvious...

They really missed an opportunity to do something amazing, didn't they? But, when Snoop isn't in the headlines for making wine, he's in them for offending families with his raunchy shows. Keep scrolling to read about his disastrous performance at a basketball game, and his hilarious response to the backlash...