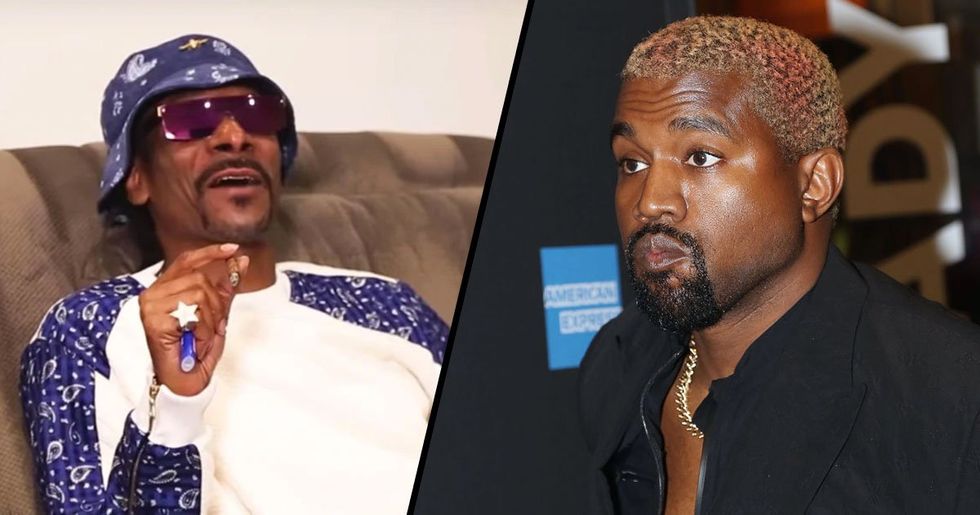 If there's one thing that Snoop Dogg is known for, it's his... Music? Excessive pot smoking? Daring lyrics regarding women?

Or his highly publicized feuds with other celebrities? Yeah, maybe that one.

Anyway, Snoop has gone off on one again, and this time his ammunition has been aimed at fellow rapper, Kanye West. Kim Kardashian recently revealed the new Yeezy sandals and, well... They didn't go down too well with Snoop, who compared the monstrous footwear to prison slippers.

Not the best feedback in the world, is it Kanye?

Keep scrolling for the full story, and to see Snoop's savage message about the ghastly shoes... Oh, and if you're really in the mood for Snoop drama, we have all the goss on his raunchy performance at the University of Kanas - trust us, you're going to want to read all about that; it caused quite a drama.

And he isn't shy of a little controversy.

Snoop has never been one to keep his mouth shut, and if he doesn't like something, he'll say it.

He's been hilariously vocal on the whole Takeshi 6ix9ine situation...

In March 2004, Snoop's unlikely friend, Martha Stewart was found guilty of felony charges of conspiracy, obstruction of an agency proceeding, and making false statements to federal investigators. Throughout the whole thing, the seventy-eight-year-old didn’t once snitch on anyone.

And Snoop decided to remind everyone of this...

“That’s my. M. F. Homegirl, solid as a rocc," he wrote. In simple, non-rapper terms, this means that Snoop rates her a ten when it comes to street credit.

Yeah, his thoughts on Takeshi 6ix 9ine are pretty clear, don't you think?

And Snoop's most recent target?

None other than fellow rapper, Kanye West.

Kanye hasn't been in Snoop's good books for a while...

Kanye is an open Trump supporter, and Snoop isn't impressed by this. During an interview with DJ Suss One on Sirius XM, Suss attempted to get into a conversation about Yeezy and his politics. Snoop interrupted and began a rant about Trump and his racist supporters.

He had a lot to say about Kanye's political stance.

When discussing that anyone who supports Trump is a guaranteed racist, he said, “Kanye too. Don't forget about him too. F*** you too. Throw him in the bag, he right with them mother******s."

And now, Snoop's annoyed at one more thing...

Snoop isn't the biggest fan of the new Yeezy Slides.

Kim Kardashian had raved about the latest addition to the collection of Yeezy footwear on her Instagram Stories, saying, "New Yeezy slides for Kids OMG. They are so cute, so fresh. They’re like rubbery and so comfy."

But Snoop isn't so keen.

“She getting dudes out of jail, now he gone sell jail slippers. W.T.F. None of my business," Snoop responded in the comments. His remarks alluded to Kim's work with Donald Trump in getting upwards of seventeen people who had been locked up on low-level drug offenses released from prison.

Sorry, Kanye. But these slides are quite revolting.

And fans have certainly been loving all the celebrity tea being spilled over these admittedly Marmite shoes. Many agreed that they look like prison shoes, with one Twitter user writing, "I’m sorry are we helping prepare our kids for jail?" Or am I the only one who thinks they look like a futuristic version of Crocs? Did you hear about Snoop's... um... explicit performance at the University of Kansas? The school was forced to apologize to the families that attended the event and Snoop's response to the whole thing was incredible. Keep reading for more on that!