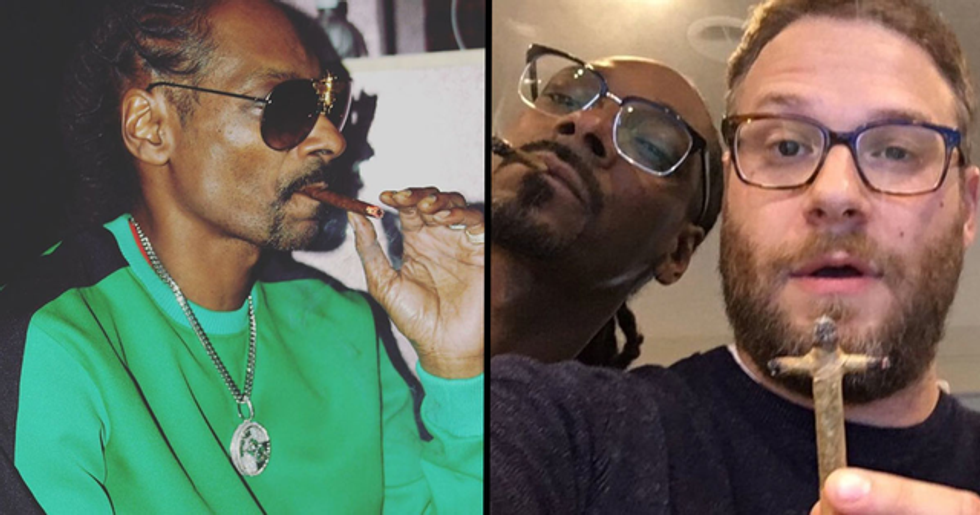 I can guarantee that most people will recognize Snoop for the latter. Snoop just loves the green stuff, and he is very rarely seen without a sneaky blunt in his hand. And someone else who is known for his marijuana use? Actor, Seth Rogen.

Along with Snoop, Seth is famous for his love of marijuana... But he is apparently very gifted too. Because the actor claims that Snoop Dogg said that he is "the best joint-roller" he ever met. Even for Snoop, that's a bold claim to make... Keep scrolling for the full story.

The California-born rapper and songwriter rose to fame as one of the best-known figures in gangsta rap in the '90s and was, for many, the epitome of West Coast hip-hop culture.

He first came to the attention of producer-rapper Dr.Dre, who featured him on his single "Deep Cover" and on his landmark album The Chronic in 1992. Snoop’s prominent vocals on the hit singles "Dre Day" and "Nuthin’ but a ‘G’ Thang" fueled his rapid ascent to stardom.

Because, in case you didn't know, Seth smokes a lot of pot too...

The actor has always sung his praises for the green stuff and has even written entire movies based around the use of marijuana.

And he's even started his own marijuana company...

If that isn't cannabis dedication, I don't know what is.

He teamed up with fellow screenwriter, Evan Goldberg...

I mean, this guy has pretty much dedicated his whole life's work to marijuana.

Seth is the Michael Phelps of joint rolling...

Well, according to his good friend Snoop, he is.

Snoop has endorsed Seth for his joint-rolling skills...

Seth appeared in an episode of Netflix’s new series Breakfast, Lunch and Dinner, in which he took host David Chang on a culinary tour of his hometown, Vancouver.

And, while on the topic, Seth began bragging about his joint-rolling skills. Quite rightly so... given the praise he claims to have received from his stoner pal, Snoop.

He claimed that Snoop was blown away by his joint-rolling skills...

And it's all down to his ability to roll "cross joints." "I don’t like to share compliments I’ve been given, but Snoop Dogg told me I was the best joint roller he’s ever met in his entire life." Seth explained, "Because I can roll cross joints – the cross joints in Pineapple Express, I actually rolled those. And they’re really hard to roll."

Seth explained where he learnt to roll as he does, "I actually had a book when we were kids that was, like, 100 Creative Ways To Smoke Joints, and the cross joint was in it." Where can I buy this book?