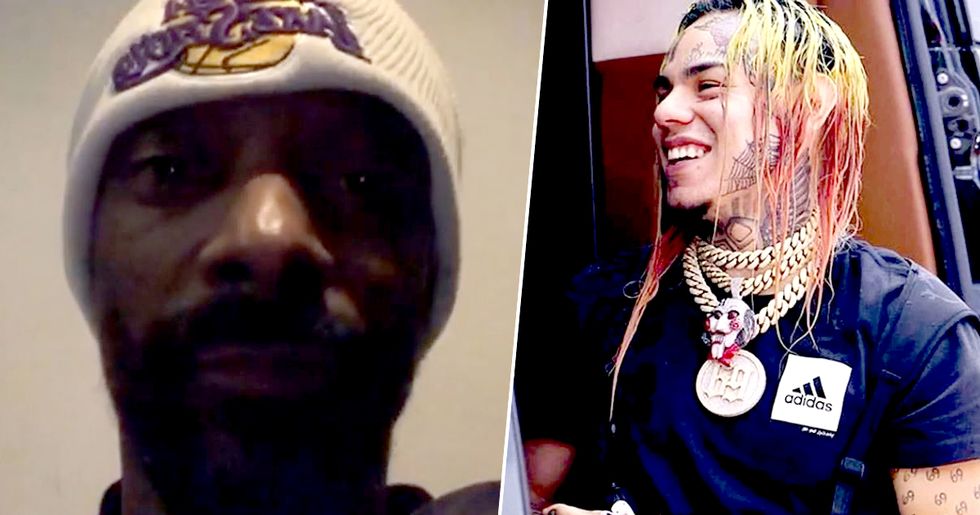 Snoop Dogg Slams Tekashi 6ix9ine for Calling Him a Rat

Just days after his premature release from jail, notorious rapper and gang member, Tekashi 6ix9ine, has been rinsed online.

Last week, Tekashi asked his followers to describe him in one word and well, they didn't hold back, calling him a rat, a snake, and a snitch.

Then Tekashi went and suggested that Snoop Dogg is a snitch too - and Snoop has hit back HARD.

Keep scrolling to see what Snoop had to say!

But things went from bad to worse for Tekashi!

He asked his followers to describe him.

Posting on Instagram, wearing a baby blue outfit, Tekashi asked his followers to describe him in one word.

And almost everybody said the same thing.

Tekashi hates being called a rat.

And he's gone on countless rants about how he's not a rat in the past. Recently he said:

And now Snoop Dogg is involved.

How so? Well Snoop recently claimed he wasn't too happy about people supporting the rapper following his release from prison, saying they’ve ‘gotta stop pushing this [rat]’.

Then Tekashi bit back.

Taking to Instagram, Tekashi shared a story asking if he should 'reveal which rappers snitched'. The story was screenshotted and posted on The Shade Room's Instagram account. Then, Tekashi commented and tagged Snoop saying: 'Hey sir, let's chat'.

If your [sic] in denial the paper work is online and suge knight speaks on it from prison but we choose to ignore who we want to call rats.

Snoop didn't immediately respond, but when he did, he went in hard!

You better get the f*ck off my line, n*****. Rat boy. You really better leave me alone. I ain’t the one. No way, no way. Go on and do your shit and get out my way, bitch. Funky dog-head, rainbow-head, dog-head bitch. Yeah, you. Better leave the Dogg alone, go and find you a cat. Tom and Jerry shit. You fuck with the Dogg… not nice, bitch. Rat boy.

The tail of a rat. Comin soon from bitch9 I mean snitch9. I mean fuc it from cuZblood.