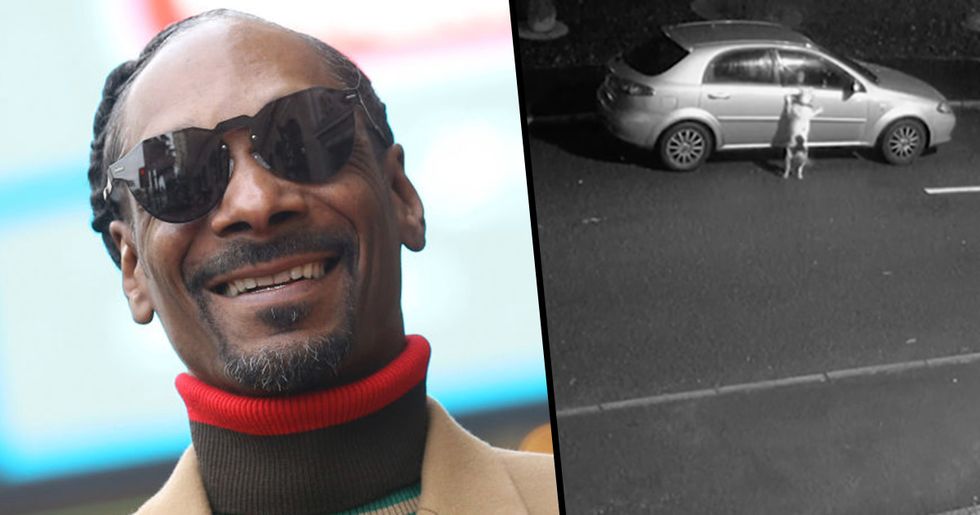 We all know the old adage - a dog is for life, not just for Christmas. But for some people, a dog can end up being just too much responsibility. Such was the case for some negligent owners in Stoke-on-Trent, a city in Northern England. Like far too many pooches, this dog was abandoned by owners. When the heartbreaking video was shared on social media, the public were super upset to see the poor treatment of the cute hound. The RSPCA gave the pup a name inspired by another famous "Dogg" - Snoop.

Well, as with anything on social media, the reach of this story went far further than expected. Far enough, in fact, to attract the attention of the doggy's namesake, Snoop Dogg. And we're super excited to see what happens next.

You'd have to be living under a rock to have never heard of Snoop Dogg.

Born in 1971, he's one of rap's biggest breakout stars - and is now known just as much for his entrepreneurial ventures and hilariously chilled personality as he is for his tunes.

He came up in the early nineties with the West Coast rap scene, first featuring on Dr. Dre's first single Deep Cover in 1992.

Perhaps his most famous single is 2004's Drop It Like It's Hot.

The hit topped the Billboard Hot 100 for three weeks, and still gets the dance floor filled to this day. With moves like this, it's hardly surprising.

Broadus' rap persona is never far from some canine associations.

According to legend, he was given his alter-ego's name by his mother, who thought he resembled Snoopy from the Peanuts cartoons. We can kind of see it!

His Twitter and Instagram are both gold-mines if you're looking for memes, self-referential jokes and anything with a little hint of weird.

Aside from dropping constant funnies, though, it's clear Snoop has a heart of gold.

In spite of early criticism of his music as misogynistic and violent, he's now well known as an activist and all around good guy. And this story really proves that point.

It all started with this Tweet from BBC Midlands.

Who would do this? 'Snoop' was abandoned in the most callous way in Trentham. The RSPCA say the footage is 'heartbr… https://t.co/4Ei5omjFol
— BBC Midlands Today (@BBC Midlands Today)1545655797.0

In it, we see a figure dropping off a dog at the side of a road then driving off. What makes it even more heart-wrenching is the moment the dog tried to follow its owner back into the car.

Especially after the RSPCA (Royal Society for the Prevention of Cruelty to Animals) shared an adorable picture of the abandoned hound.

Many people who watched the video were keen to offer their support, even expressing their desires to adopt the dog, whom the RSPCA named Snoop.

It seems no one can resist a cute doggy.

Particularly when the creature seems so gentle in nature. In spite of its cruel treatment, Snoop remains sunny natured and loving.

Snoop is a Staffordshire Bull Terrier.

He was abandoned at the intersection of Timor Grove and Pacific Road in Trentham, Stoke-on-Trent, in the UK. The video footage was taken at around 5pm on December 17th.

The RSPCA have posted some adorable updates.

The dog doesn't seem too traumatised by recent events, and is shown affectionately nuzzling an RSPCA worker. So far, the person who abandoned Snoop has not yet been found.

For those who were worried, it seems Snoop is doing just fine.

The viral video, plus unbelievably adorable follow-up pics have prompted a lot of adoption offers, from all around the world.

Some famous faces even threw their names in.

Sue Perkins, comedian and former host of the Great British Bake Off said she's give "gorgeous" Snoop a "loving home in a heartbeat."

And she wasn't the only one!

Well-known British political journalist Andrew Neil also offered his services in re-homing the dog, saying he "will take it, gladly."

And let's not forget the most famous potential adopter of all.

Yep, that's right. Upon hearing the tale of his doggy namesake, Snoop (the human version) also said he'd be happy to take in the abandoned pup.

Since the two share a name it would almost be rude not to offer, right?

Speaking to the Daily Star, Snoop described the video as "heartbreaking." "If he really needed a home then he has one with us," the rapper offered. "There's always room for another dog in Casa de Snoop."

As you may have guessed from his name, Snoop is a doggy fan.

He has a fair few canine pals, and his French bulldog Juelz even has his own Instagram page!

We don't know about you, but we're getting a pretty cute mental image of Snoop's crib.

We think the dog incarnation of Snoop would fit in just fine with the other pooches and his namesake owner!

The rags-to-riches nature of Snoop the dog's trajectory captured the media's imagination. It's not every day an abandoned pet from England attracts the attention of one of music's biggest stars, after all!

There's just something innately satisfying about the idea of the two Snoops (dog and Dogg) coming together, even in such tragic circumstances.

Although we can't be sure the pair will ever actually meet.

Snoop the dog still isn't available for adoption, predominantly because the RSPCA and Stoke-on-Trent police are still searching for the owners who abandoned him.

Nonetheless, it's nice to hear some good news for once.

The story of Snoop was already warming the hearts of the UK - but the celebrity addition of the other Snoop Dogg was what really made the story take off internationally.

And we're happy to report Snoop has been kept in the loop.

RSPCA staff took to twitter to thank Snoop Dogg for his generous offer - and are sure to have passed the message along to his doggy counterpart.

We're happy to report that Snoop is doing just fine.

ITV News caught up with the unlikely star as he's being looked after by the RSPCA. It's safe to say the dog is looking very well - and cute!

It's a pretty great story overall.

How many news pieces can you think of which included cute dogs and famous rappers? Not enough, in our opinion!

It's enough to get us a little bit emotional!

With so many dogs thoughtlessly and cruelly abandoned each day, it's great to see one making headlines for all the right reasons!

Look at the contrast between these two images!

From roadside to bedside great work from @RSPCA_official in rescuing Snoop the dog who has captured the heart of th… https://t.co/2V4SxBTWAd
— dominic dyer (@dominic dyer)1545938465.0

The dog on the left looks scared, sad and lost. The dog on the right, happy, contented and comfortable. All it takes is a little bit of care!

Plus, it'll bring more attention to the needs of abandoned dogs.

Great that Snoop is well after his ordeal - remember folks, animal centres up and down the UK are full of lovely an… https://t.co/IPLliLIN51
— RSPCA Leybourne (@RSPCA Leybourne)1545928352.0

Snoop may not yet be available, but there are plenty of dogs which are just as loving and cute in need of good homes. If you really want to make a difference in a dog's life, adopting from a shelter can do just that.

Thousands of dogs around the world are looking for forever homes.

And even if you aren't a famous millionaire rap superstar, we're pretty sure all a dog needs above all is lots of love and care.