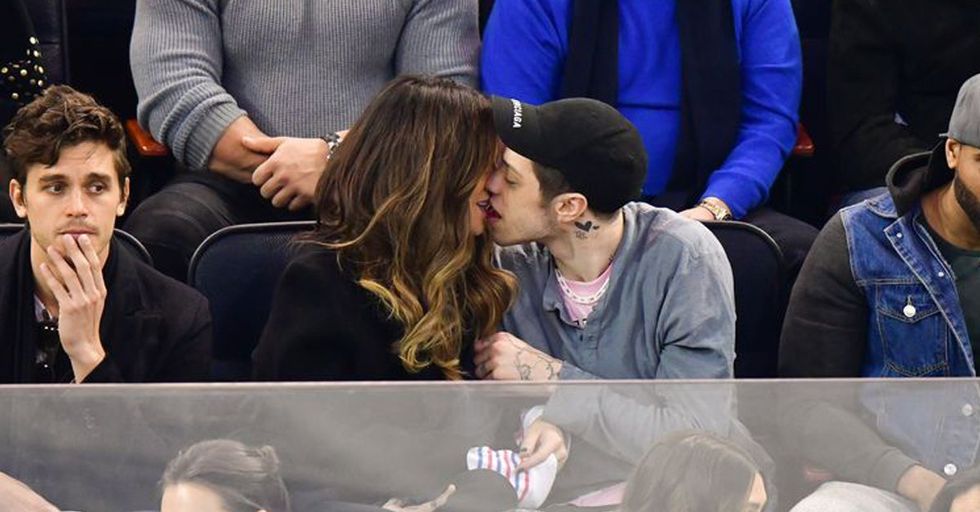 So Apparently Pete Davidson and Kate Beckinsale Are Together Now

Celebrity relationships are impossible to ignore. I mean, I'm sure some of you could care less. But if you're like me, a pop culture-obsessed person, then you pretty much know who every single celebrity is dating. It's our gift and our curse. I didn't ask for this! It's just who I am!

Yes, at the end of the day, celebrities are just human beings. Despite their wealth and beauty and life in the public eye, they go through break-ups and make-ups just like the rest of us. Their love lives just happen to be on display for the world to see.

This past weekend, comedian Pete Davidson and actress Kate Beckinsale attended a Rangers and Capitals game in New York City and put their new relationship on full blast. Y'all. It's hot and heavy. They did not shy away from the PDA. And all of us are definitely Antoni from Queer Eye, sitting awkwardly next to the make-out sesh.

This is Pete Davidson.

He's an actor and a stand-up comedian, best known for being a cast member of Saturday Night Live since 2014. He was only 20 years old when he joined and is one of the youngest SNL cast members ever.

It's very cute. They have quite the bromance.

He is hilarious on SNL.

He's also had many public break-ups. If you don't know Davidson from his acting and comedy, then you probably know him from his dating...

Cazzie David. He was previously in a relationship with the writer and comedian, who is also the daughter of Larry David.

And well, we all know how that went. It was a whirlwind of a romance!

The couple got engaged after only a few months of dating.

After getting engaged in June 2018, the couple broke off their engagement in October 2018. The singer wrote about their love on her album Sweetener and in her single, "Thank U, Next." "Even almost got married, And for Pete, I'm so thankful," she sang.

This is Kate Beckinsale.

She's an English actress who has been acting for decades.

You may know her as the nurse stuck in a love triangle from 'Pearl Harbor.'

Her and Josh Hartnett and Ben Affleck look like babies in this picture. Who else thought that this movie was the best movie they'd ever seen? Just 12-year-old me? Cool.

She was married to American director Len Wiseman for 12 years.

They have no children together. Prior to that, Beckinsale was in a longterm relationship with actor Michael Sheen.

They remain good friends and co-parent their daughter together. So, Beckinsale and Davidson have both had high-profile relationships...

And now, they're apparently dating each other!

The couple seemingly came out of nowhere, and the internet is collectively freaking out. This is what the internet lives for, people.

Davidson and Beckinsale were first linked back in January.

They apparently got friendly at a Golden Globes afterparty and were spotted together a few times. But this past Sunday, the pair attended a hockey game in NYC and their PDA seemingly confirmed that they are, in fact, together.

The couple didn't seem very interested in the hockey game.

I cannot unsee this photo. They truly did not care that they were in public. They were going for it.

They were all smiles walking together at the game.

They look downright giddy! Could it be true love?

What, hockey doesn't you in the mood for some kissing?

It definitely put these two in the mood. I'm blushing.

Antoni from Queer Eye was sitting right next to them, and he's a big mood. We are all Antoni in this situation.

He looks the way all of us feel.

Who else feels slightly uncomfortable looking at these photos? Poor Antoni! And yet, I can't look away...

The internet had a field day with these pics.

The memes are never-ending. But did we expect anything else?

Everyone finds themselves being an Antoni in this situation at one point or another. It's never fun, but it's always entertaining.

How would any of us react in this situation? Likely the same way. There's a hot and heavy make-out session happening in public, how can you not feel super awkward?

Some people wanted pointers from Davidson.

Pete Davidson has been engaged to Ariana Grande and is now dating Kate Beckinsale. Can you PLEASE tell us your pic… https://t.co/IB7WOepnqR
— Jesse Lifson (@Jesse Lifson)1551714215.0

This Twitter user is just trying to find out Davidson's dating secret. Is Davidson a wizard? Someone, tell us.

The couple also hung out after the 'SNL' afterparty on Saturday night.

They're spending lots of time together, which could lead one to believe that it's getting serious. Honestly? I'm here for this relationship.

But the real MVP of the hockey game is Rami Malek's face...

Rami Malek and David Harbour were also at the hockey game. They're too precious.

Is this accurate for anybody else?

Thanks to Kate Beckinsale and Pete Davidson for summing up wedding season for me in one image. #couplegoals https://t.co/alU0uZMHOZ
— Heather Colvin (@Heather Colvin)1551720750.0

I'm crying – this is too real. I have PTSD from this meme.

A lot of the internet was just plain confused about this relationship.

One Twitter user just wanted to know how. I'm not sure anyone will ever know. Who are we to judge romance?

Stop. This is too much.

Davidson and Beckinsale's daughter are only five years apart. Do you think they'll be friends?

Pasta is a worthy soulmate.

Me watching all my friends meet their soulmate while I’m contemplating whether my soulmate is pasta. #PeteDavidson… https://t.co/eLo4oMfYFc
— Violetta 🦋 (@Violetta 🦋)1551721066.0

I'm not judging anybody who feels spiritually connected to pasta. Pasta is everything.

Some people were very excited about this new relationship.

Yep, this sounds about right.

It's fine, we're all fine. Pete Davidson and Kate Beckinsale especially seem to be doing fine.

The overall mood seems to be, "WTF?"

The old cliché may be correct in this case - "opposites attract." Share this with your friend who is obsessed with celeb drama.