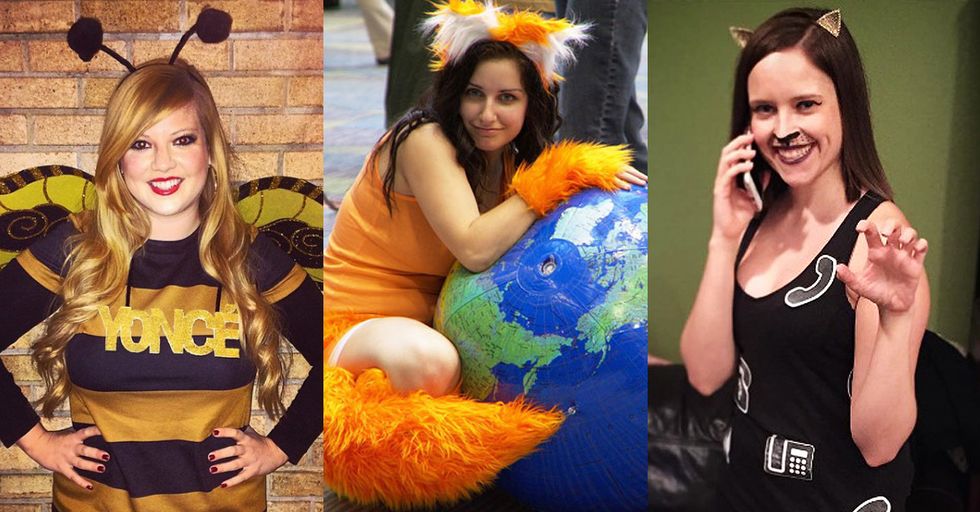 The Absolute Punniest Costumes That Anyone Can DIY

For those of you who love a play on words and want to get clever with your costume this year, we've got your back (and your front) with 40 punny costumes that anyone can make in no time (or money) flat.

Get it? Hash browns are playing tag. #clever

The Breadwinner and Dust Bunny

All you need for the Breadwinner get-up are some medals and bread. Whereas the Dust Bunny requires some ears and cleaning supplies.

Be the Queen B, literally, by adding some sass and some wings. A glass of lemonade might also be a nice touch...

Speaking of wings, throw on a pair and add a few of your favorite social media icons. That's really something to "like!"

In a galaxy far, far away... You throw on a giant plastic cup and head off to use the Force.

Bonjour! Slap on some paint a la the musical icons, grab a baguette, and you're good-to-go.

Speaking of French... Throw on a beret with your breakfast gear and you're ready to take on the town.

Pig In a Blanket

Speaking of food, who doesn't love a pig in a blanket? All it takes is ears, a snout, and of course, a blanket.

You can pretty much guarantee that no one else is going to show up in a chicken costume wearing a thong and dancing on a pole. Then again, maybe you have crazy friends...

Who doesn't love bacon? Then just thrown on some devil ears and the yolks on you...

To be, or not to be... One must think deeply about being a philosopher with a child's twists.

Whether or not it's your browser of choice, you have to admit that's just plain clever. Paint a giant ball like a globe, throw on some foxy gear, and you're ready to boot up.

via: Above the Law

This requires buying the costumes at the store — unless you're super crafty — but it's worth it when people groan as they figure out what you are.

Here to save the day! Or at least your clothes from wrinkles.

Forget Dora! Dumbledore is out to explore the countryside.

If you're a redhead, you're already halfway there! Just throw on some bread — and watch out for hungry birds.

The real thing is no laughing matter. But when you do it up as a clever costume, you're sure to get the laughs!

Doh! A deer, a female deer... And then add some wings to your cow costume to make this udderly clever duo complete.

Just like the drink, this Hawaiian punch costume goes over well with a crowd and it doesn't cost much. Be the life of the party, but remember to bring extra punch for everyone, because it'll go quick!

Hey! His eyes are up there, ladies!

This one requires using your head — literally, at times — but if you can handle walking around with a nightstand on your shoulders, you're guaranteed to win over the crowd.

A Blessing In Disguise

It really doesn't get simpler than this. Simply throw on a sticker and a fake nose and some glasses.

Everyone's favorite breakfast food gets a sinister makeover when you add in the addition of a (fake) weapon. It's sure to throw some for a (Froot) loop.

via: Money Side of Life

Remember boomboxes? Create one out of cardboard and just slam that thing on your noggin to the tune of less than $1 for a clever costume.

Speaking of which... What did she do to earn those badges?

A Man Walks Into a Bar

Simply attach an old painted wrapping paper tube to a hat, throw on a festive shirt, and be the start of any bad joke...

Boom! Create a giant frame to attach to your shirt and your couple's pun-tastic outfit is complete.

No longer a boy wizard... Nope, a wig and some clay transforms little Harry into quite the artist.

Which is exactly what everyone will be when they catch on to what this simple yet simply creative costume is.

Yo, yo, yo. Just pick out your favorite candy and spice, create a sign, and add in the necessary accessories.

Breaking bad puns? Possibly, but totally worth the groans.

Chip On Your Shoulder

If you're really clever, someone will go with you as dip. Then again, you might just be too bitter...

Tell me what you want, what you really, really, want... The perfect punny group costume, that's what.

A Fork In the Road

When one comes to the fork in the road... ...take the costume less traveled, and one that doesn't take much effort to be effective.

Have a doll? Slap it on your bum and freak everyone the heck out.

Can you hear me now? Here kitty, kitty...

Bust out some pool toys and mini basketballs and your costumes? A total slam dunk.