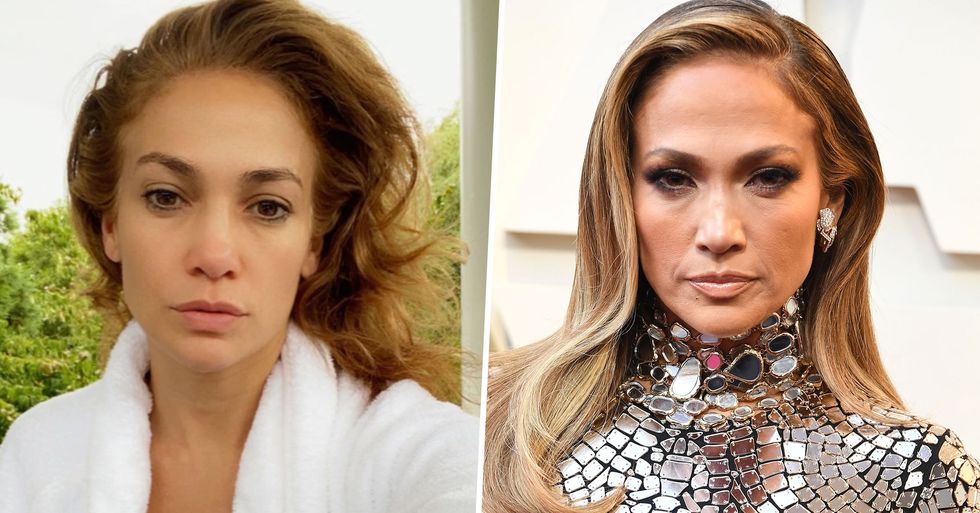 Jennifer Lopez has been brutally mocked by social media after pictures have emerged of her wearing an "ugly" bejeweled wedding dress.

Keep on reading to check out the eye-watering dress...

Now, you don't get any more iconic than Jennifer Lopez.

Jennifer began her career as an actress starring in many blockbuster hits such as Maid in Manhattan and Monster-In-Law, and she even guest-starred in 2 episodes of Will & Grace.

Jennifer has also released a number of big hits, some of which had major success on the pop and dance charts.

The star is currently engaged to Alex Rodriguez.

The loved up pair were both cautious about who they dated publicly and kept their relationship under wraps for some time. Speaking in April of 2017 on The Ellen DeGeneres Show, Alex talked about how the pair hooked up.

Jen is a woman who gets what she wants.

Alex told Ellen that, upon encountering the star, "We basically had a small chit-chat... and she says, 'You have my number, reach out.' And I went home that night and reached out." They make it seem so easy!

Both Jen and Alex have children from previous marriages.

There appears to be no animosity from either side, and the 2 families have fused into one big happy family. We just love to see it!

I mean, who wouldn't want Jennifer Lopez as their step-mom?

Family is clearly very important to both Jen and Alex...

And what first attracted Jen to the baseball star was his evident family values. Now fifty-one years old, Jennifer is no longer interested in dating boys. The Hustlers star wanted to date a real man - someone to raise a family with.

And in March last year...

The pair made things even more official by announcing their engagement!

A date for the wedding is yet to be set...

And of course, all fans can think about is what dress JLo will choose for her big day.

We can only imagine how stunning she will look...

And of course, they will make for the most beautiful husband and wife!

It seems that we have a bit of a wait for this exciting moment...

But it seems that we'll have to make do with what we have currently, and that brings us to today's story. Back in October 2019, the star was spotted wearing a very unique wedding dress whilst filming for the movie Marry Me in New York City... and fans were left speechless when they saw the dress, to say the least!

The actress was wearing an enormous sequin-adorned ball gown by Zuhair Murad...

Which was matched with a bejeweled veil, resulting in a lot of sparkle. Of course, fans have had some strong opinions about the look, but it seems that not many were keen about the way the dress was fitted on Jen's gorgeous figure.

Here's the dress in question...

But how on Earth is she breathing?!

Make sure to keep scrolling to check out the most jaw-dropping fashion moments of the decade...