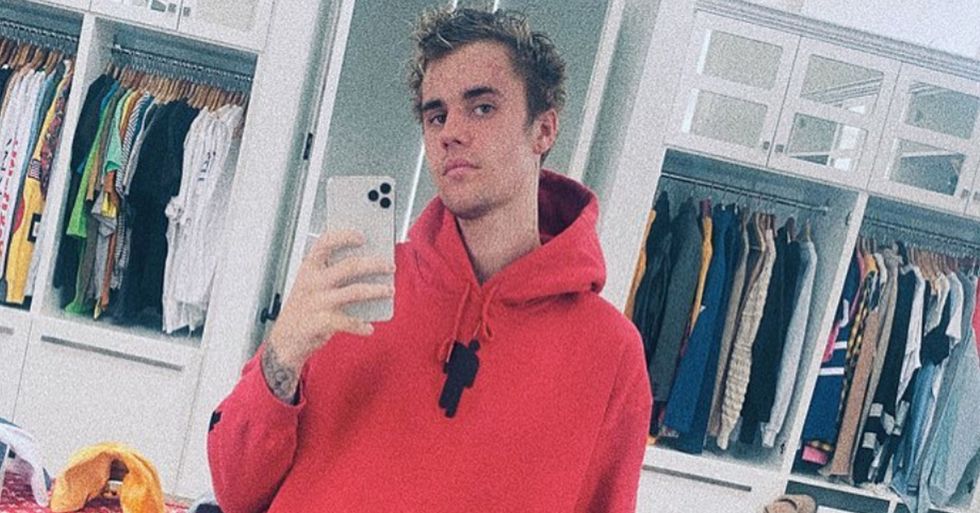 Justin Bieber has just shown off his new neck tattoo, but it turns out that social media aren't loving it... at all.

Keep on reading to see exactly why his new ink has been mocked so much...

Justin Bieber is being trolled... yet again.

And this time, it's all over a new neck tattoo he's showed off to his fans.

Now, anyone who is anyone knows who Justin Bieber is.

Yet despite his lavish lifestyle, Justin actually comes from very humble beginnings.

Born on March 1, 1994, in Stratford, Ontario, Canada, to a single mother, Justin was completely unknown on the music scene until he started uploading singing covers online.

And in the 2 years that followed, the teen went from being completely unknown to rubbing shoulders with some of the biggest A-listers on the scene.

The young star bulldozed into the Billboard Top 10 in early 2010 with his hit single “Baby," which also featured rapper, Ludacris - and teenage girls went crazy for it.

And since, there truly has been no stopping him.

His chart-topping success is unbelievable, and has enabled him to enjoy a life most could only dream of.

Justin has delivered hit after hit.

Justin Bieber is one of the biggest pop-stars... ever.

Just like any other pop star, Justin's personal life is constantly making headlines... and that includes his romance with his now-wife, Hailey Baldwin-Beiber.

People are just obsessed with the Biebers...

And their documentary, The Wedding: Mr. & Mrs. Bieber, gave fans a behind-the-scenes insight into their special day.

Justin has come a long way since starting out at a thirteen-year-old boy...

And having grown up in the spotlight, he had to live out his teenage years in the public eye - the good and the bad. In fact, he's recently admitted that his quick climb to fame left him "suicidal".

Justin's adolescence was a tough time...

And he was known for acting out in public and having huge meltdowns on stage in front of thousands of screaming fans.

Even though he seems to have grown up and sorted his act out, Justin has been struggling with his own demons in more recent times...

And he has been pictured several times looking underweight, sickly, and gaunt.

Many speculated that the singer had a drug problem...

Because that's how it usually goes, doesn't it? His change in appearance led some people to believe he may have been using hard drugs after pictures surfaced of him looking ill with blotchy skin.

So it's understandable that fans may have jumped to this conclusion.

But recently, the singer took to Instagram to put the rumors to rest...

Justin then revealed he has been diagnosed with Lyme disease, a serious bacterial infection caused by ticks.

As well as being diagnosed with Lyme, Bieber revealed yet another shocking detail about his health.

Since the announcement, Justin seems to be living his best life with Hailey by his side...

And he has been showing off some new ink to his 147 million followers on Instagram.

But fans don't seem to be loving it and the singer has been brutally mocked online over the "horrible new tattoo."

Here's the tattoo in question...

What do you think? Do you think Justin now has "too many" tattoos? For more on the Biebs, keep on reading to find out why he visited Kanye at his Wyoming ranch following the rapper's public break down...
20%

$16.75 $13.40
Buy Now
See More Deals
We hope you find these deals as awesome as we do! Just an FYI: we may receive a share of sales from links on this page