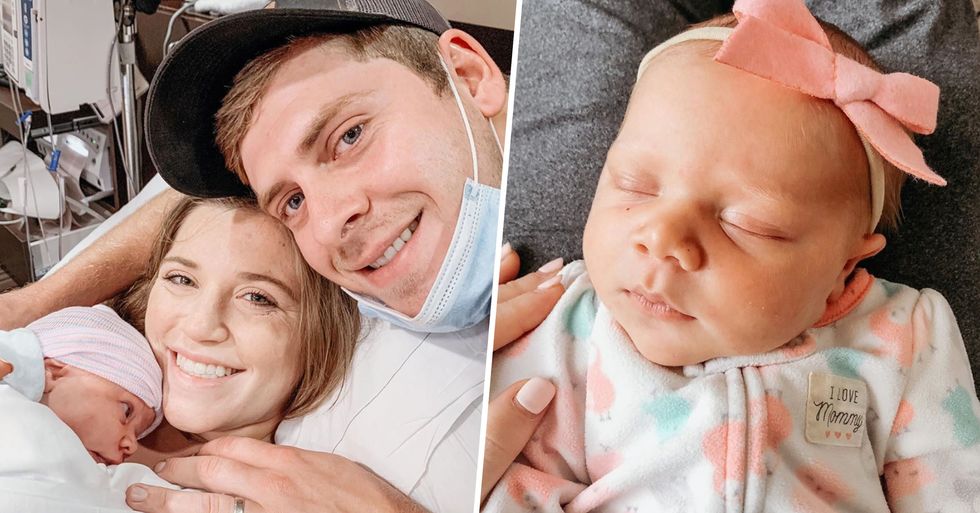 Counting On stars, Joy-Anna Duggar and Austin Forsyth have welcomed a baby girl into the world, and the photos are nothing short of adorable!

But the name choice? Well, get the tissues ready...

There is officially one more Duggar in the world.

The already larger-than-life family has an extra mouth to feed after one of the siblings, Joy, welcomed a baby daughter last week.

Now, most of you will recognize the Duggars from 19 Kids and Counting.

The popular TLC reality series aired in 2008 and followed the unconventional life of the Duggars who had - you guessed it - nineteen children.

The family are devout baptists...

And they would frequently discuss their values of purity, modesty and, of course, their faith in God.

As a part of this faith, the Duggars don't believe in birth control...

And they ultimately decided to "allow God to determine the number of children they have." That would explain the nineteen kids then, wouldn't it?

But, thanks to this faith, the Duggar children were subjected to a somewhat unconventional upbringing.

The siblings were all homeschooled, and their access to mainstream entertainment such as movies and television was strictly limited... Apart from all the cameras and film crew filming them for their own mainstream reality series, of course.

This meant that the older siblings were only able to become acquainted with a potential partner in a group setting with their family.

But, somehow, many of the older siblings have found equally as Christian partners...

Most of which have been heavily documented in the spin-off series, Counting On.

And this brings us back to Joy Forsyth.

Formally known as Joy-Anna Duggar, the young woman met her husband, Austin Forsyth as a teenager.

Austin asked the family patriarch's permission to enter into a "courtship" with Joy...

Which is a monitored version of dating with strictly no physical contact.

Austin explained his reasoning for wanting to marry Joy on a recent episode of Counting On.

He said: "You know, over the years, I have just been watching and I really admire her heart for the Lord and her character. She’s such a diligent worker. She gets all the younger siblings working. She's a good delegator."

So, of course, it didn't take long for the pair to announce their engagement.

In March 2017, the couple revealed that they were due to wed - and caused a whole lot of Christian controversy by sharing a full-on hug, which is prohibited by the Duggar courtship rules.

But, putting the religious controversy to one side...

The couple went ahead and tied the knot after only a couple of months of engagement. The wedding was originally scheduled for October, but they unexpectedly moved it up by a full 5 months... I wonder why they were in such a rush?

Well, their real motive for moving up the wedding became quite clear...

Because, within the blink of an eye, the pair announced their first pregnancy just 2 months after their wedding. Joy wrote excitedly on Instagram: "Austin and I are SO thankful to announce that we are parents!! Even before we were married we prayed that God would give us children and we are so blessed that he has given us this baby! Jesus is the giver of Life!"

Joy revealed: "We are so blessed by the arrival of our son, Gideon Martyn Forsyth!"

The pair dove headfirst into parenthood...

But, sadly, tragedy was just around the corner.

Joy revealed that they were expecting in May last year.

She wrote: "Some of you have guessed, some of you had no clue... November 2019 Baby Forsyth #2 is Due!! Cannot wait to meet this new little one! Gideon is going to be such a great big brother!!"

But, tragically, she suffered a miscarriage at twenty weeks.

She announced the devastating news on Instagram, writing: "We only had her for 20 weeks, Life is fragile and precious. So thankful the Lord gave her to us for that short time! She will be in our hearts forever! Thank you all for your love and support! We can feel the prayers!"

Despite their pain, the family plowed on...

And, evidently determined to continue growing her family, Joy announced her pregnancy the following March. She wrote: "Yes... it’s true! @austin4site and I are PREGNANT again! It’s been quite the crazy journey these last few months, but we are so thankful that mom and baby are healthy!"

This time, Joy experienced no complications during her pregnancy...

And was very excited to reveal to everyone that she was expecting a baby girl.

And, on August 21st, their daughter arrived into the world.

Joy wrote: "To say my heart is full is an understatement. We have been dreaming of this day and are so happy to announce that our baby girl arrived August 21st at 2:12pm weighing 8lbs 5oz and is 19.5" long! She has the best personality, is easy going and loves to be held!"

Well, it's certainly gone down a treat with Joy's fans after she announced it yesterday!

Her name is Evelyn Mae Forsyth.

Evy Mae for short. And do you know what it secretly stands for?

It means "wished for child."

Excuse us while our hearts break into a million pieces...

A huge congratulations to the happy couple!

We wish them a lifetime of happiness as a new family.