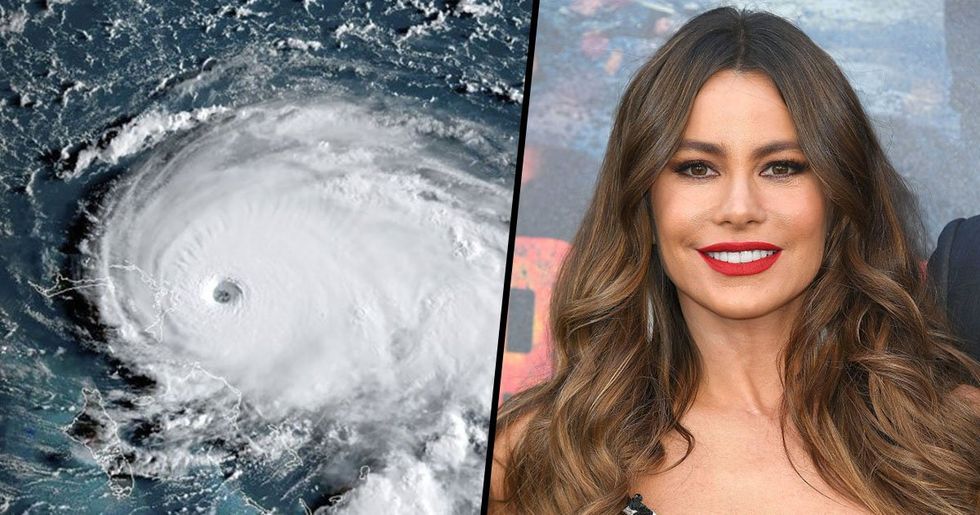 While most regular folk are at the mercy of this terrifying natural disaster, the hurricane has incidentally proved just how big the gap between us and them... with news coming to light that Modern Family actress, Sofia Vergara, escaped the commotion by flying away on her private jet.

The press is having a field day, but, eh, I'm sure she'll be able to fix any damage to her public image by throwing some money at the clean-up, right?

But what exactly is a Category 5 hurricane? Well, even our President doesn't quite know the answer to that. President Trump unbelievably revealed his confusion over the storm, despite 4 of them had threatened the U.S. during his Presidency.

For your information, and the President's, the Saffir-Simpson Hurricane Wind Scale classifies hurricanes by the intensity of their sustained winds. Category 5 is the highest classification on the scale, and only storms of wind gusts of at least 156 mph can be classed in this category.

The storm first hit Abacos as a Category 2 storm but has gradually moved across the Bahamas, all while being bumped up to Category 4 by The National Hurricane Center in mere days. It has now come to a standstill over Grand Bahama Island, but is expected to move onwards today.

And now, the storm is threatening the United States.

Quite worrying considering our President doesn't have a clue what it is, don't you think? Hurricane Dorian is stampeding right toward the path of Florida's peninsula, and today is the critical day that is likely to determine whether the state is dealt a powerful blow or a less intense scrape.

And it's arrival is expected somewhere between the Florida Keys and southern Georgia.

“I think a lot of Floridians are heeding the advice because they see that the storm could be really powerful, potentially a major impact," DeSantis told Fox News. He also said Florida has millions of gallons of water for distribution and FEMA is prepared to distribute water as well.

And big companies are working hard in order to prepare Flordia for the impact of the storm. “We’re also working with companies like Publix and Walmart to get those shelves restocked because we know that’s important," DeSantis said. He also said Florida has millions of gallons of water for distribution and FEMA is prepared to distribute water as well.

I don't think that anyone could accuse Sofia Vegara of being overly sensitive during the Dorian Hurrican disaster. A few days before the expected storm, Vegara posted an image of herself on Instagram. The actress captioned the shot: "Esperando a Dorian"- which translates to "Waiting for Dorian."

Maybe she didn't think about how it might look...

I mean, people are always talking about the weather, right? And isn't there something always so interesting about the calm before a storm?

Then again, in this case, I think that perhaps Vergara ought to have checked her privilege...

Whilst, for Sofia Vergara and her family, the storm might have meant their pre-planned vacationing was looking to be cut short, for many other people, the upcoming storm would threaten to destroy their homes and everything they held dear.

It was the private jet photo that really upset people...

Captioning the Instagram post with a pretty insensitive "Bye bye Dorian," Sophia posted a snap of her family aboard her private jet escaping the chaos.

But are people really being fair to Sofia?

I mean, why shouldn't she fly her family from a danger zone if she has the means to do so?

Should we really expect celebrities to save people in crisis?

Why should Sofia Vergara be called out for not donating her private jet to help loads of strangers? And, I mean, do people even want to be evacuated? If their home is in an area of danger, where are they possibly supposed to be evacuated to?

So people could leave if they wanted to...

@Ladyy_Monster @SofiaVergara The coast guard literally evacuate people for free... and actually a lot of people choose not to leave.
— Jak3 (@Jak3)1567279392.0

It's not as though people are necessarily trapped there...

With natural disasters, there is never really anyone to blame...

I mean, I guess, in a way, we're all to blame, given that these disasters are the effect of global warming - something that is being caused by our high carbon footprints and disrespect towards the natural planet...

Sofia has since posted again since the backlash.

I knew someone would call her out!

Perhaps Sofia Vergara needs to fire whoever works on her PR team, because they sure are making her look bad on the internet...