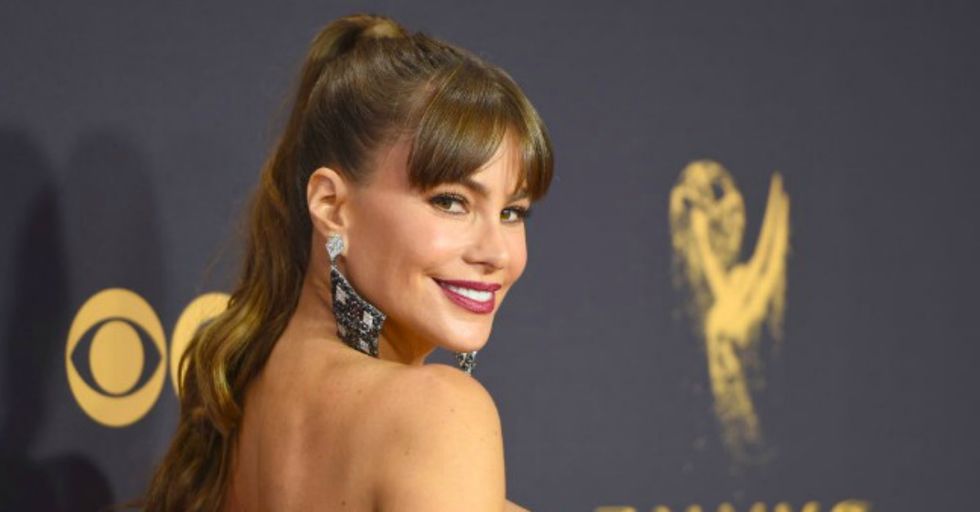 Someday, we'll live in a world where people are recognized for their talent instead of their looks.

But today is not that day.

Sofía Vergara has never not slayed on the red carpet.

The Modern Family star is a total bombshell who can rock any look. Oh, and she's 45 years old.

Vergara's red carpet looks are always sure to turn heads.

As a matter of fact, we're sure that Vergara could slay on a carpet of any color.

Even the dingy beige carpet in your studio apartment. Vergara could waltz in there and immediately make you think you'd been given an VIP pass to the Oscars.

The woman has never taken a bad picture.

This is a 100% true, confirmed fact. Look for an unflattering picture of Vergara. We dare you. It doesn't exist.

And the Internet has some FEEEEEELLLLLIIIIIINNNNNGGGGSSSS about it. (Obviously. Don't pretend you're not feeling them, too).

Look at how dapper he is! Of course, we expected nothing less from the son of Sofía Vergara, but it's nice to see that he lives up to expectations.

He's not just a pretty face! Manolo's got jokes!

Manolo also gave us the inside scoop on Kevin Spacey's socks.

And thank goodness he did. Can you imagine going through life not knowing what Kevin Spacey's socks looked like at the 69th Primetime Emmy Awards? We thought not.

Twitter was quick to point out just how fine Manolo looks.

We're with you, girl. Also, excellent emoji usage. The next reaction took things to a whole new level, though...

This woman isn't just browsing. She saw what she wanted, and she's going to get it.

Law school, trilingual, and she's cute?! This woman's a triple threat! 2017, you've been a rough year. If nothing else, please just let one of us find true love with Manolo Vergara.

We all agree that Joe Manganiello can feel free to skip the rest of the awards shows, right?

#ManoloOrBust! Unless Manganiello is going to learn how to use Instagram...

Even though the Emmys were last night, the entire Internet is going to be thinking about Manolo Vergara for a whiiiiiiile.

Don't even worry about it. We'll be thinking about him until next year's Emmys. At least.