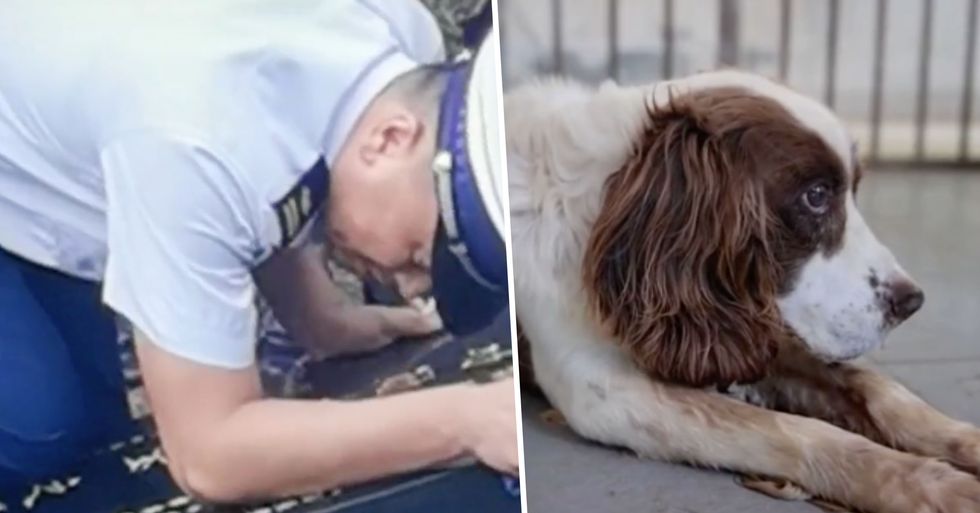 Dogs are the most loyal creatures on earth, not only do they enrich your life with love and friendship, but they can also serve in a range of jobs that usually require keeping people safe.

One of the main ones being emergency services. And one pup has been given a heartbreaking send-off by his handler after risking his life to serve his country...

Dogs are the most lovable creatures on the planet.

They become loyal companions to their handlers, and sometimes even live out the remainder of their days with them after they retire, due to the strong bond formed over the years.

But the tragic reality of this line of work is that lives will be lost along the way...

And the latest tragedy is in China where a detention dog has been given the last farewell by his trainer.

Wang Rujian had worked with Tianbao for twelve years before the pup sadly passed away due to multiple organ failure last month.

It was the dog's farewell ceremony this week, and the heart-breaking photos have been shared all over the globe.

Mr Wang could be seen grabbing onto Tianbao's gravestone tightly before breaking down in tears.

"Tianbao, it was worth having you all the way. May you rest in peace," he said at the funeral in Shandong Province on Wednesday.

Tianbao was an English Springer Spaniel born in 2008.

"Treasure from heaven" is what his name translates to in English.

Mr Wang trained the pooch from day one, at the Shandong Search and Rescue Dog Professional Mobile Detachment to become a sniffer dog for the fire department.

Mr Wang described him as "timid" but "courageous" when the time called for it.

And was even awarded "meritorious dog" in 2011.

Due to his rescue efforts during the earthquake in Yushu Tibetan Autonomous County in 2010.

The brave animal saved not only the locals but also Wang himself.

Wang collapsed while working alongside the pup during the disaster. Tianbao immediately kept Wang conscious by biting his leg gently and barking, which alerted other firefighters.

"After that, Tianbao and I became partners of life and death," Mr Wang said.

Tianbao was clearly talented, as in the same year he also became a national champion at the rescue dog competition.

After eight years of serving his country, he finally retired in 2016.

He was initially sent to a kennel to be looked after, which meant that Wang no longer saw his beloved dog.

But that soon changed after Wang sent an application letter for the dog to be in his care.

Tianbao lived out the remainder of his four years with Wang until he sadly passed away on July 26.

The Shandong Firefighting Department held a tribute for Tianbao on August 19.

After which he was put to rest at their dog cemetery.

Keep scrolling for the tragic news of a K9 officer who has sadly died after being left in a hot car...