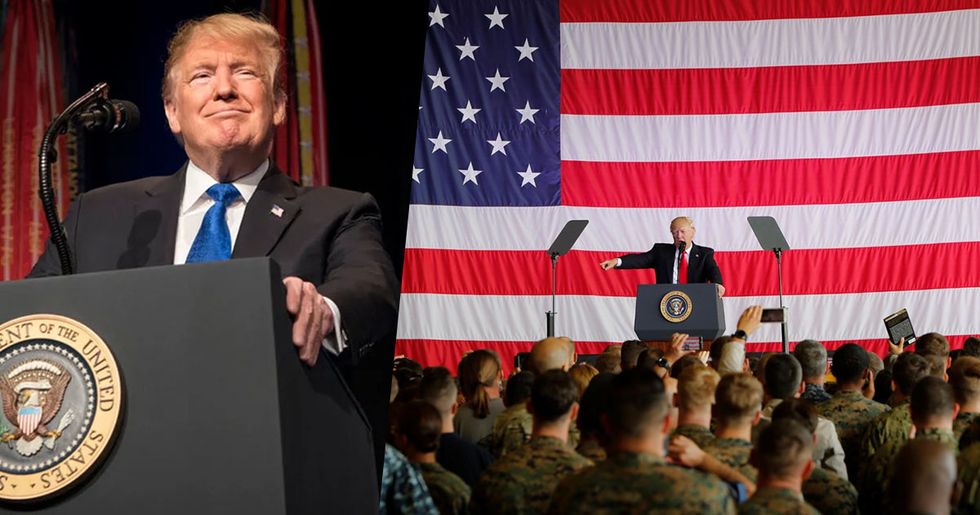 Some Children Born Overseas to U.S. Troops May Not Automatically Have American Citizenship

Since Trump came into power three years ago (though it feels like a lifetime ago), the introduction of his new policies have been out to marginalize and blame the victims of our society for the problems embedded within its foundations. Though America has always been the land of the free and the home of the brave, now, it just seems to be going downhill.

And it appears that the Trump administration is back at it again, doing what they do best. On Wednesday, an announcement was made by a spokesperson who explained that, now, some children born who are born overseas to U.S. soldiers might not be automatically be granted American citizenship.

Keep reading for the details of this new policy as well as reactions from a worried nation...

As a country, we have tremendous respect for the men and women who serve our country.

Though we would love to avoid war, sometimes, there's no choice for some of our soldiers. Our troops give their lives so that we can continue to live ours with the freedoms that we have.

So why would we want to make their lives any harder?

They are out on the front lines, trekking across borders, protecting and killing when necessary - why should they have to worry about anything else? Rather than making their lives more difficult, how about we make them easier?

It seems as if the Trump administration has got other plans.

On Wednesday, the Trump administration made an announcement, which basically said that some children who are born overseas to U.S. troops might not be automatically granted American citizenship.

They were forced to address the issue after immense backlash from the nation, including U.S. soldiers.

The U.S. Citizenship and Immigration Services (USCIS) made a change to the original policy.

Previously, the law stated that they would automatically be granted citizenship...

According to the Immigration and Nationality Act 320, all children born to U.S. citizen parents are considered as "residing in the United States."

But that won't be the case anymore.

Now, children born to U.S. service members who are deployed overseas will not be seen as official American citizens, which will also have an effect on the process in which they can be granted the status.

Children who are not U.S. citizens, but are adopted by one, will also no longer receive the green card, even if they are living with the person that adopted them.

"So how does this affect the children of military personnel?"

USCIS spokesperson Meredith Parker told Task and Purpose: "The policy change explains that we will not consider children who live abroad with their parents to be residing in the United States even if their parents are U.S. government employees or U.S. service members stationed outside of the United States, and as a result, these children will no longer be considered to have acquired citizenship automatically."

They will now have to undergo a process in which they can claim the status.

She also said: "For them to obtain a Certificate of Citizenship, their U.S. citizen parent must apply for citizenship on their behalf," and this must be completed and submitted before the child's eighteenth birthday.

And according to the USCIS, previous laws also stated this in less explicit terms.

It stated that "no similar provision was included for children of US armed forces members in the acquisition of citizenship context is significant." But this only came into play if a U.S. citizen had a spouse who was not considered as "residing in the U.S."

This is one of the reasons that this new law is more explicit.

The new legislation states that children cannot be granted automatic citizenship if they were born outside the U.S., no matter if their parents are American citizens or not, and that includes those who are serving in the military.

Instead, they will fall under the category "INA 322."

And this means that they were born outside of the U.S. and are not currently residing there, meaning they must complete the necessary requirements to legally become a citizen of the country.

To me, and so many other people, this sounds utterly pointless.

There are so many other problems that need addressing in this country and the administration is focused on changing things that don't need to be changed. Good job(!) With this new law, what are we really trying to achieve? Was it crucial for the improvement of our country, or are we just trying to divide more families?

I thought that we had done that enough at the border?

Now we're targeting our own military? The servicemen and women who give their lives for the sake of ours? Sounds like a lose-lose situation to me.

Even though CNN has stated that the policy will only affect about 100 people per annum, people are very worried.

When the news first hit the headlines, U.S. troops were the first to display their outrage because they were frightened that it will hit them the hardest as well as those adopting children from abroad.

Tal Kopan, a correspondent for the San Francisco Chronicle, posted this tweet, which explicitly outlined some concerns.

Once more for clarity for those reading the replies — this does not apply in regards to birthright citizenship or i… https://t.co/7axPTBTZSR
— Tal Kopan (@Tal Kopan)1567030342.0

But that didn't stop people from expressing their own views.

Something doesn't add up here...

@kylegriffin1 A lot of people who support this tyranny will also claim to “support the troops.” Got bumper stickers and everything.
— Adam Parkhomenko (@Adam Parkhomenko)1567024048.0

You can't support this law and claim to support the military. It just doesn't make sense.

So what happens to those U.S. citizens that are stationed abroad for work duties? If they have a child, they're also not classed as citizens?

@kylegriffin1 Make no mistake, they will reverse birthright citizenship... If you're not already nervous, you should be.
— Dr. Shiva Balaghi (@Dr. Shiva Balaghi)1567024306.0

One user replied to this comment saying: "It's the next logical step. Retroactive removal of birth citizenship." Doesn't that scare you?

I'll leave you with this...