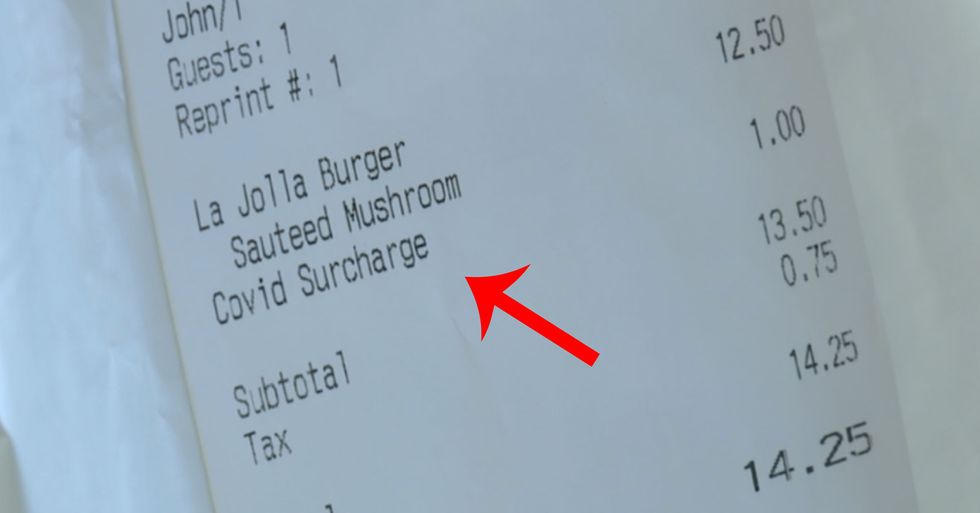 An online debate has been sparked after a number of restaurants have decided to start charging their customers a "COVID tax" since reopening their doors in the wake of the pandemic.

Keep scrolling to see what people had to say on the matter...

But it's safe to say that the hospitality industry has had one of the hardest hit.

Restaurants and bars all over the world have closed their doors in the best interest of public safety.

But what a lot of people seem to be forgetting is the workers in this industry being affected.

People actually earn a living from working in the hospitality industry - whether that's working behind a bar or waitressing tables. It is a lifestyle for many.

Millions of hospitality workers are facing an uncertain future and are struggling to make ends meet.

And even though President Trump promised financial stability to these workers...

But despite America being the worst affected country in the world...

Several states have begun to lift lockdown restrictions in a desperate bid to heal our already severely damaged economy.

Our death toll is climbing at a terrifying rate...

But it seems that some businesses have been granted permission to reopen despite this fact.

Of course, the restaurants that have decided to reopen their doors are aware of the risks involved.

Applebee’s restaurants Chief Executive Officer Steve Joyce said to Bloomberg: "Plastic plates and forks, knives, and spoons are available if customers want those instead of porcelain plates and silverware. Kitchens are opening with fewer staff members, allowing for social distancing."

All restaurants that are opening their doors are taking the same safety procedures.

"We’ve got team members that are probably a little nervous about coming back, and we want them to know we’re doing everything we can to keep them safe," Joyce said. "And this will be a gradual reopening process. It gives us time to make sure we’re getting this right."

But it seems that some restaurants have other ideas on how to rebuild their businesses.

Goog's Pub & Grub in Holland, Michigan, has recently reopened its doors to customers and they've presented an unexpected way of keeping their business afloat.

A customer tweeted a picture of their receipt after dining with the restaurant...

And a "COVID 19 surcharge tax" was added at the bottom of their bill.

It appears that the owner had no choice but to add this new charge...

The owner of Goog's Pub & Grub  Brad White told TMZ that he's had to add the charge to cover skyrocketing prices for food and restaurant supplies.

If you think about it, customers aren't paying that much more.

White went on to explain that his joint added an extra 86 cents to all bills to factor in to-go bags, silverware, condiments, and styrofoam containers since, at this moment, restaurants in Michigan are limited to delivery and take-out only.

Prices have doubled for the restaurant's supplies.

White said that most people understand it's necessary to help the restaurant level off costs, but he added that some have accused him of trying to exploit the pandemic to rip off customers.

Many believe that simply paying for what you've eaten will be enough to help the business and that the COVID tax charge was unnecessary.

But White defended himself by saying, "That's the furthest thing from the truth." He also pointed out that he's also had to downsize from thirty-five employees to sixteen. He's trying to help out his remaining staff by raising their hourly wage from $6 to $10.

@talialikeitis Everyone needs to seriously calm down. It’s $2. How about trying to support these restaurants during… https://t.co/3PHHvqpMx7
— Shaun Peterson (@Shaun Peterson)1589491847.0

It is clear that he is doing all he can to keep his struggling business afloat.

But White isn't the only business owner doing this to make ends meet...

It has been reported that numerous restaurants in California and Missouri have been implementing this additional charge in order to help keep their businesses afloat.

The owners and staff of these restaurants do not deserve the abuse they have been receiving because of this decision.

They are simply trying to make ends meet and, at the end of the day, paying an extra 86 cents isn't at all a lot in the long run.

We need to be supporting our local businesses, and not turning away from them.

For more on the pandemic, keep scrolling...