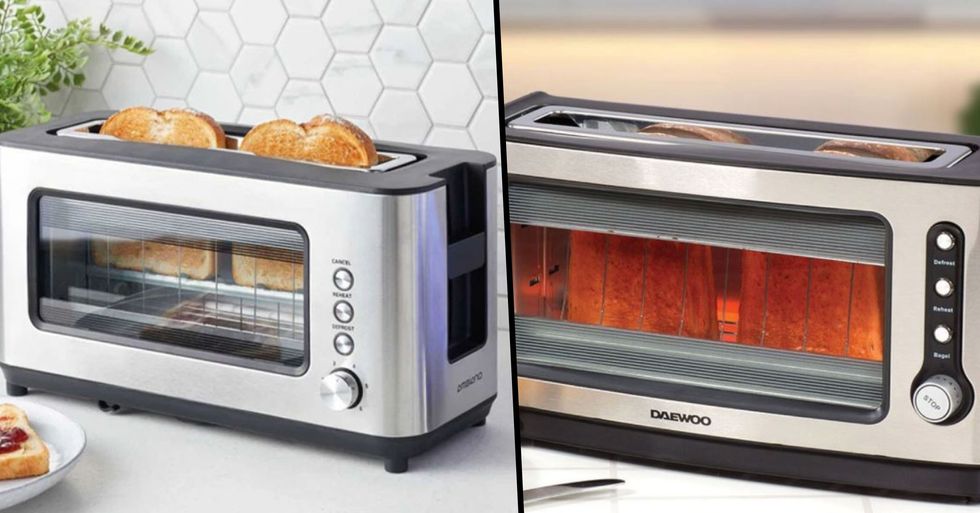 Someone has created a "see through toaster" so you'll never burn your toast again, and it is truly the most incredible thing...

Starting your day with something delicious is always great news.

There are so many delicious options on the menu!

Whether you go for standard cereal...

Although even within this bracket, there are seemingly endless opportunities.

Or maybe you prefer to cook up a storm?

Eggs and bacon are hard to beat, let's face it.

And who could forget waffles?

They're really the king of breakfast foods.

They have so many looks.

They can be covered in fruit for a "healthy" option...

Or dipped in chocolate...

For a truly decadent treat.

Or kept simple and effective.

But what's even better than a breakfast waffle?

Now, you really can't go wrong with a simple slice of toast to start your day!

Or very overdone, there's no denying that toast is one of the OG breakfasts.

But there's really nothing quite as frustrating as burning your toast.

Yes, the pain is very much real.

If only there was a way for us to check on our toast to prevent it from burning...

Well, now there is a way!

Some unknown genius out there has had the idea to invent a see-through toaster...

And now, everywhere is selling them!

The world's first see-through toaster was invented by Magimix...

And even though it will set you back an eye-watering $194, it is totally worth it.

But there are cheaper options out there that are just as effective...

This see-through toaster from Aldi is only $30... and check out that see-through kettle too!

Instead of cooking two slices behind each other like standard typical toasters...

These toasters are designed to cook the slices next to one another so that pesky piece at the back doesn’t go unseen and get burnt to a crisp.

This Daewoo 2-slicer is great for not only bread, but also for other products such as pancakes, waffles, and crumpets.

We most certainly know what we'll be buying on payday!