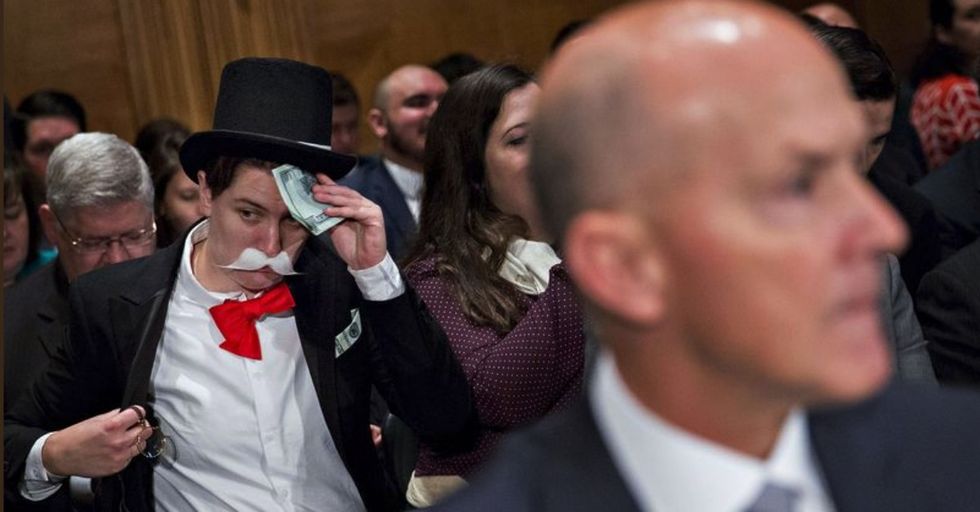 This month, Equifax revealed that it had suffered a huge breach of data, where people's sensitive personal information had been leaked into the void. The event compromised the personal information of almost 143 million Americans, which is basically half of the country. People's credit card numbers, social security numbers, drivers licenses, birth dates, and addresses got into the hands of hackers. This was especially bad because those are exactly the pieces of information you need to verify that you are ...well, you. And despite this huge data spill, Equifax just got a seven million dollar contract to help the IRS detect fraud. It's definitely raising some eyebrows.

One person wanted to bring attention to the fact that companies are often pardoned and given easy-outs of situations like these, and their unique way of peacefully protesting made viewers chuckle in an otherwise distressing situation.

Equifax tracks credit history and helps build out credit scores that people use when they apply for things like loans, apartments, or credit cards. Notice anything out of the ordinary?

Photobombing the Equifax CEO is none other than Rich Uncle Pennybags from the world-famous board game, Monopoly.

Monopoly man, also known in real life as Amanda Werner, was protesting the forced arbitration clauses Equifax made to prevent people from suing the company for the data breach. Amanda (who prefers the pronoun "they") really played up the Uncle Pennybags caricature, stroking their mustache, peering through a monocle, and even wiping the sweat off their forehead with a fake dollar bill.

Amanda stayed in the audience throughout the meeting as part of a protest by the advocacy organization Public Citizen.

I don't have video of it (yet!) but the Monopoly Man at the Equifax hearing allegedly wiped his brow with a dollar… https://t.co/w8izvrYbVb
— Haley Byrd Wilt (@Haley Byrd Wilt)1507133503.0

Equifax offered customers free credit monitoring after the hack, but it included a clause that said that people who used that free monitoring would not be able to sue the company. Amanda told Tech Crunch that if a consumer has a lawsuit but that lawsuit is kept silent, big companies are not held accountable for wrongdoing. Public Citizen wants to protect consumers from events like these and force companies to own up to their mistakes.

People loved that Amanda found a way to protest and make them laugh in an otherwise dry situation.

Amanda brings attention to corporate greed and supplements their everyday political activism by giving out Get Out of Jail Free cards at events like these. Monopoly man was even present at the Wells Fargo hearing.

Amanda even chased the CEO down after the hearing to try and give him wads of fake cash, meant to symbolize the deal Equifax just made with the IRS.

Whichever side you're on, you have to admit that the Rich Uncle Pennybags costume should earn Amanda a free trip around the board, and maybe even $200.