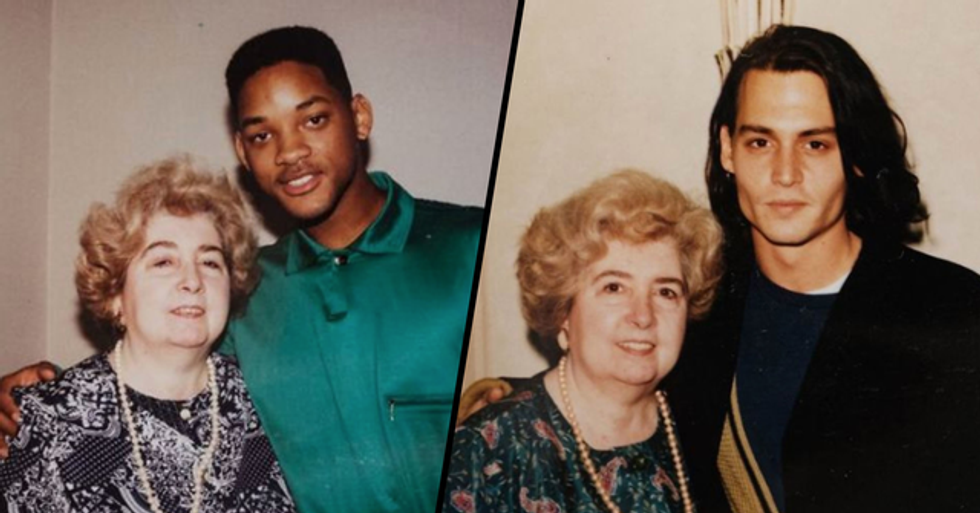 We love an internet mystery - and if there's one with a nostalgic '90s flavor, then that's all the better. And this strange, donated scrapbook of celebrity phots really has it all, from Angelina Jolie to Keanu Reeves.

Scroll on for the incredible pictures...

Here's where it all began.

But inside was a real treasure trove.

The scrapbook was stuffed full of snaps of A-listers.

Who was captured twice by the collector!

We love this lady's dedication!

She met the star several times over the years.

Once alongside Juliette Lewis.

The photos read like a who's who of '90s celebs.

So, who is the mystery woman?

She's actually been identified - and her story is rather cool.

An she was actually quite a big deal in Hollywood - as her pictures prove!

She was a member of the Hollywood Foreign Press Association.

It's basically an organization that reports on the entertainment industry - including working to put together the Golden Globes.

But as to why she donated these priceless pics?

But boy, did the thrift store unearth some treasures.

Whoever thought there were never-before-seen images of these Hollywood icons?

And we can bet you Maria has met (and posed) with them.

Some of these stars are still huge today.

Like Liam Neeson, who's still smashing out the blockbusters.

This might be the most impressive collection of celeb-sightings we've ever seen!

The group shots are incredible.

Some of the pics show celebs who are no longer with us.

Like this shot with the late, great Kirk Douglas.

Some pics are uber-cute.

Like this snap with a young Elijah Wood - aww.

Have you ever seen a more '90s photo?

Except for maybe this one?

Back when Hugh Grant was still a floppy-haired heartthrob.

Antonio Banderas makes an appearance, too.

What's even more impressive is how many of these actors are still working today.

This snap with Tim Roth is a personal fave.

The backgrounds are pretty weird, too.

Why do these pictures look like a family photoshoot?

This picture is adorable!

It kinds looks like Maria and Drew Barrymore were IRL pals!

It's not just actors.

Is there anyone Maria hasn't met?

What a cool job.

We bet Maria has some serious stories to tell.

This picture surely has a story behind it.

'90s Robert Downey Jr. was notoriously quite a handful.

Harrison Ford also made the cut.

We're living for her facial expressions.

They're hilariously ubiquitous in each pic.

Each celeb sighting is more impressive than the last.

Even Bruce Willis got collected.