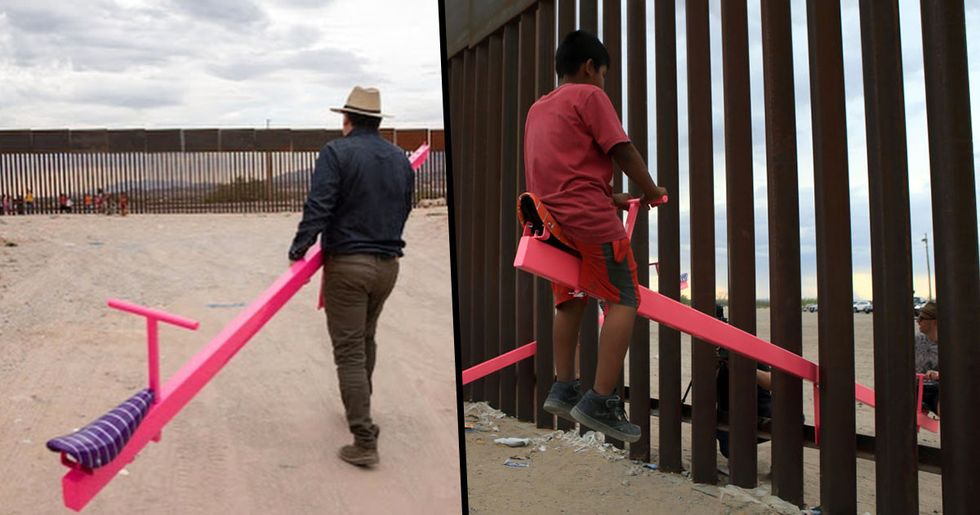 Someone Installed See-Saws at Mexico-U.S. Border so Kids Can Play Together

We constantly hear news from the border but it often isn't pleasant. There are always headlines about, death and destruction. However, this time, it's different. I'm here to deliver some good news!

Someone has installed bright, pink see-saws at the Mexico-US border to children from either side can play with each other. The invention aims to promote unity and togetherness in an already very hostile Trump era.

We are loving it!

There are children from either side laughing and playing near the border, the only thing separating them is a metal fence that is soon going to be replaced with a wall. If Trump gets his way, the dreaded wall might be coming a lot earlier than we had hoped. But for now, who cares? Let's bask in the glory of pink see-saws!

Mexico-US relations have been rocky, to say the least.

The US is pushing for a crack-down on Mexican immigrants crossing the border and into the country.

President Trump has promised he is going to deal with the issue.

But things aren't looking good right now. After many broken promises, Trump has decided to put "detention centers" in place while he figures out what to do with the steady flow of people still crossing into American territory.

A cruel and unethical punishment as opposed to what the people were looking for.

It's one thing to want a more efficient immigration process, but it's a whole other to want to discriminate and abuse migrants. What are we supposed to do? Keep them all locked up in cages forever? It should have never happened in the first place.

And that's exactly what these "detention centers" do.

Horror stories from between the chain-link fences have emerged, of people being beaten and raped while they're waiting for a decision on the approval of their current status.

And this has sent the American people into an uproar.

Protests against these "detention centers" have been occurring frequently, with lots of people afraid that history is on the verge of repeating itself. This is not what we asked for nor is it an efficient or permanent solution to the immigration crisis.

One of Trump's solutions was building a massive wall.

Yes, you know what I'm talking about, the dreaded wall that the President of our country goes on about. He promised that it would be the first thing he does, but three years into his reign and talks are still going on... Thank God.

However, the Supreme Court ruled that he can have extra funding to start the build.

Recently, it was announced that Trump is allowed to dip into billions of Pentagon funds in order to proceed with building his so-called border wall. This decision reversed the actions of two trials that took place earlier in the year which froze all funds towards the project.

And now that it's been given the thumbs-up by the Supreme Court, there's no stopping its progression.

The 5.7 billion investment he was seeking could not be met by the government. This led to the President declaring a National Emergency, where he expressed that he will be forcibly taking funds from other accounts so he can have his wall.

Even despite prototypes being constructed, people aren't losing hope.

Some have vowed to destroy the wall, some have even refused to pay taxes that aid towards it's building, but to be honest, I don't think avoiding taxes is a good idea.

Some have even said that they've got "taller" plans for when the Wall is done.

Activists have promoted the idea for constructing ladders tall enough to reach over the wall, so the two sides don't have to remain separated. And I'll tell you one thing, that's going to cost a hell of a lot less than the actual wall.

Regardless, it seems as if the American people just want peace and unity.

And that's exactly what this pair aims to do.

Recently, there have been a bunch of fluorescent pink see-saws installed at the border.

These playground toys have been attached through the border fence along the outskirts of Sunland Park in New Mexico and Ciudad Juarez in Mexico.

And the reason that motivated this innovative idea will melt your heart.

According to their inventors Ronald Rael, from the University of California in Berkeley, and Virginia San Fratello, from San Jose State University, this will allow children from both sides to be able to play together even if they aren't technically together.

It all started ten years ago...

Mr. Rael, a professor of architecture, said that he and Ms. Fratello, who helped him bring this idea to life, started the project ten years ago and now it's a reality.

He said the event was "filled with joy, excitement, and togetherness."

In his Instagram post, he writes: "The wall became a literal fulcrum for U.S. - Mexico relations and children and adults were connected in meaningful ways on both sides with the recognition that the actions that take place on one side have a direct consequence on the other side."

Some people think that this is a good, non-aggressive method to tackle hostility issues at the border.

And this user has taken it to the next level.

He has plans to turn the entire thing into a tourist attraction...

However, some people aren't too convinced that this is a good idea...

It could distract from the entire problem at hand by glorifying borders.

Bayan continued in the comments.

Is this just a mere "accessory" to distraction from the real issue at hand?

But the pictures are just as heartwarming as the message behind it, right?

Peace, unity, and fun, what more could you ask for?