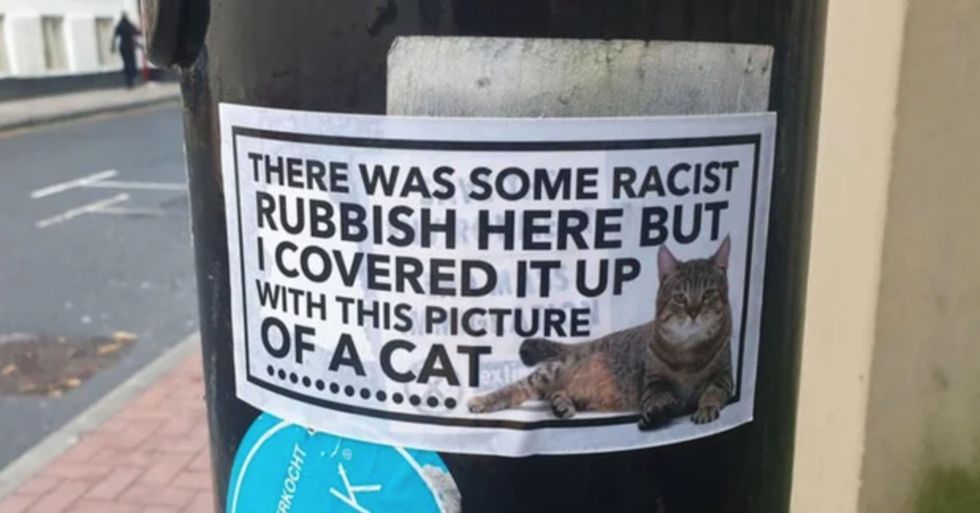 Someone Is Covering Racist Graffiti With Cat Stickers

In big cities all around the world, graffiti takes over many urban areas.

And sadly, a lot of this graffiti contains racist remarks and jokes.

But one anonymous hero in the U.K. decided enough was enough, and they covered up the racist garbage in their city in the best possible way.

As anyone who lives in a big city can relate...

Graffiti has taken over many of the public spaces.

Graffiti is considered a form of art.

But there's no denying how some of this art can truly bring a city to life.

Of course, amongst the good comes the bad...

And a lot of big cities struggle with an influx of racist slander being written on walls and buildings.

Whilst the majority of communities around the world stand against racism...

Cowardly individuals feel it is acceptable to permanently mark their cities with disgusting language and racist insults.

It costs local councils a lot of money to cover up graffiti in public areas...

And sadly, a lot of these horrible remarks remain etched upon walls for months on end for the public to endure every day.

Nobody should be subjected to racism...

And even though it is very much an ongoing problem, one anonymous person in the U.K. has come up with a light-hearted way to try and mask this issue.

A peculiar looking sticker was spotted in the city of Manchester, U.K...

It was stuck on a lamp post and it read, "There was some racist rubbish here but I covered it up with this picture of a cat," along with a picture of an adorable cat that is capable of cheering anybody up.

Local media reported that the stickers were covering up hoax Extinction Rebellion posters that read inflammatory remarks about immigration - which is something that the environmental group does not stand for.

Several of these unique stickers were spotted around Manchester (and elsewhere)...

And it has got a lot of people asking... who is behind this brilliant plan?

But we have discovered where the sticker originates from... and it is very far away from Manchester.

The sticker comes from Australia...

The Australian organization called Cracks Appearing Distro sells the stickers online for $6 a piece, which isn't much at all in the name of covering up racism.

People all over the world have gotten wind of the stickers...

To the person using cat stickers to cover racism in Manchester, we salute you. https://t.co/6ct6rDCgZV
— Northern Soul (@Northern Soul)1583401163.0

And people think it is a wonderful idea and many have taken to social media to salute the anonymous hero.

Not only do the stickers cover up the disgusting attitudes of those select few...

“What do you do when you see posters with fake ‘racist rubbish’ plastered across the city? Cover it with a cat stic… https://t.co/xlYVc7pDpK
— ShadesofNoir (@ShadesofNoir)1583606282.0

But they also serve as a reminder to how much racism is in our world at the moment.

Make sure to keep scrolling to learn about the man whose car was vandalized with racist graffiti and how the repair shop dealt with it...