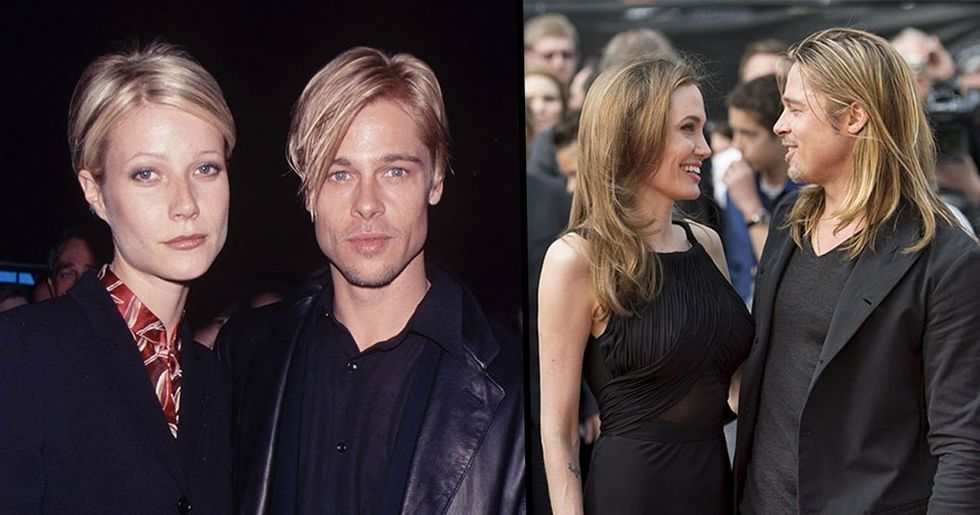 If it's true that imitation is the greatest form of flattery, the internet has discovered the greatest hype-man of a boyfriend there is. Brad Pitt has been in the public eye for decades, and, in that time, he's certainly had his fair share of girlfriends. But an old newspaper article about his relationship modus operandi has recently resurfaced - and people on Twitter can't get over it.

Brad Pitt is seen looking more than a little similar to his girlfriends throughout the years - not once, not twice, but too many times to count. Not sure you believe us? Scroll on to see for yourself.

Brad Pitt has had a career that any actor would be envious of.

Born in 1963, he's been acting since '87. He first really came to fame, though, in 1991's classic Thelma and Louise. Since then, he's gone on to star in films and television shows of all genres.

Alongside top acting prowess, Pitt has another tool in his belt.

He's regularly thought of as one of the best looking men in Hollywood - and he has the little black book to prove it. Over his years in the spotlight, Pitt has been in a number of high-profile relationships.

And, recently, the internet has discovered something funny.

Over the years, Pitt has rocked a good many different looks - from a clean-cut, boy-next-door look, to a buzzcut-styled bad boy, to a tortured, disheveled artiste.

But the internet has discovered an odd correlation when it comes to Pitt's many looks.

An old newspaper article was unearthed by one Twitter user which pointed out that Pitt is almost constantly mirroring the appearance of his significant other.

We've done the (extensive) research so you don't have to. So, without further ado, we present to you the compelling evidence that Brad Pitt is guilty of persistently jacking his girlfriends' swagger.

Perhaps Pitt's most famous relationship was with the beautiful actress and activist, Angelina Jolie. But perhaps the attraction was a little weirder than we initially thought.

Because the two consistently look a little too similar for comfort.

When Jolie goes for a side-swept, glossy 'do paired with an all-black outfit, Pitt does the exact same thing.

And what about this?

The pair almost look like a still from the movie in which they met (Mr & Mrs Smith) when leaving the Hotel Belvedere in 2006.

The pair briefly dated in the '90s after starring in Too Young To Die together. And if you didn't know that it was the '90s, the matching shaggy hairdos complete with curtain-y bangs should be enough to give it away.

The pair met when working together on Cutting Class, and proceeded to enjoy a short-lived relationship spent mostly rocking identical bangs.

But it wasn't just hair that the pair coordinated.

Here they are looking like a pair of catalog models in complimenting outfits and matching tiny '90s shades.

You may have forgotten that this pair ever dated - or perhaps you just didn't recognize Brad Pitt with his long, straightened brunette locks?

Internet detectives realized that Pitt has been copping his chick's style forever, finding this image from the early eighties of Pitt with his then-girlfriend - both with bouncy, bob hairdos.

Just look at those shaggy '80s hairstyles and matching silver jewelry. They're a new-romantic dream couple, that's for sure.

It's not just hair Pitt takes girlfriendly "inspiration" for - nope, he's not afraid of copping a whole outfit, as this photo with Mike Tyson's ex, Robin Givens, proves.

Has an image ever screamed "1994" more? Here, Pitt's look is undoubtedly inspired by his co-star girlfriend - but he also looks suspiciously similar to Nirvana frontman, Kurt Cobain, right?

The two posed together for a publicity still for Dallas with matching denim and frosted tips. Awww.

The 1998 couple are giving us perfect "cool weirdos in high school" vibes at the 50th Annual Writers Guild of America Awards.

Aniston and Pitt were an early '00s power couple, and many thought that they were real-life soulmates - not least because of their matching surfer dude hairstyles.

But that wasn't the only look that the two shared.

People on the internet can't get enough of the phenomenon.

But we've been left with many questions as to why, exactly, Brad Pitt does always look quite so like his significant other.

Some have a theory.

Pitt has complained before about having "facial blindness" - so perhaps this is a tactic to ensure that he can always identify his girlfriend in public?

Pitt is a famous actor, right? So perhaps he's just dressing for the role of X's boyfriend to ensure that he performs the role as well as he can.

But there is a question of logistics.

Do the girlfriends know about Pitt's plan? Is it a joint effort, or does he have to be stealthy when picking his outfits and hairstyles?

And many have noticed something else.

Not only does Pitt seem to emulate the looks of his significant others - but he also appears to mold his personality around them, too. Sweet? Or creepy?

And others had a horrible realization.

You know how they say that pets start to look like their owners? Perhaps it's a phenomenon that reaches even further than we thought.

Maybe it's not Pitt emulating his girlfriends, but the girlfriends emulating Pitt. After all, he's a bonafide hottie, no matter problematic the hairdo.

Either way, there's something that we can all agree on.

Whether he's truly original in his style or not, you have to admit, Brad Pitt can rock almost any look - and more power to him for being willing to experiment! For more Brad Pitt content, keep scrolling!