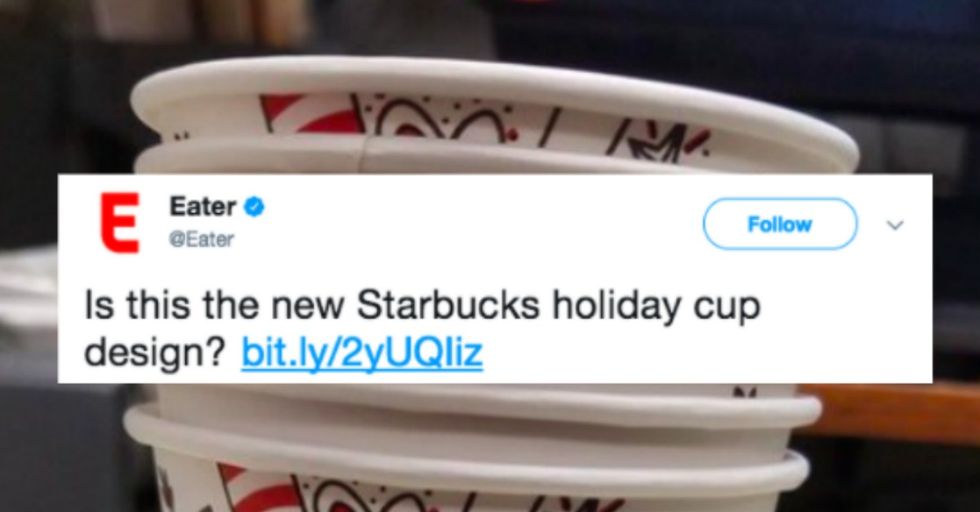 Now that your veins are pumped full of Pumpkin Spice Latté and you've bathed each night in a silky bath of Salted Caramel Mocha, it's nearly time to trade those autumnal luxuries for Christmas delights. And there's no way you can enjoy your Gingerbread Latté or Peppermint Mocha if it's not served to you in a holiday-themed Starbucks cup. There's just simply no way.

It seems like the purveyor of indulgent holiday drinks may have traded their bland red cups for something way more festive this year — the Starbucks holiday cup may have leaked online, and we're about to show it to you. Let's just hope they don't leak in real life. We'd rather not have a lap full of Eggnog Latté.

A Reddit user who goes by the name DarthSpoopy shared a photo earlier this week of what many believe to be the Starbucks holiday cup for the 2017 season.

"Just got it in our order," the Redditor wrote along with the photo. "Holiday short cup design!??" The photo has since been deleted, which only makes me believe even more that it was legit. Luckily, a few publications snagged a screenshot before it was taken off the Internet.

WOW. They went full out with the Christmas love on this one. I kind of adore it. As you well know, the Starbucks holiday cup has a controversial history. After removing Christmas-y elements from its holiday cups in 2015, Christian groups deemed them enemies of Jesus. No, literally, an evangelist in Arizona said Starbucks had "removed Christmas" from its cups "because they hate Jesus."

But it looks like Starbucks might be embracing Jesus once again this year with these adorable Christmas doodles, and I don't know about you, but I am so excited.

Like, Buddy-the-Elf-level excited for Christmastime at Starbucks. And I'm Jewish.