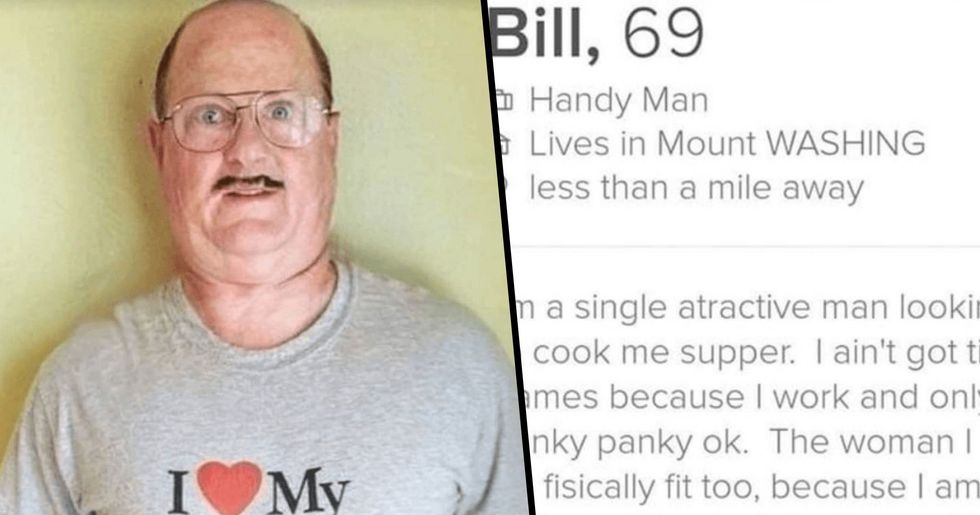 But one profile has gone viral this week - for all the right reasons? Still on the hunt for the man of your dreams? Look no further: meet Bill.

Behavior on Tinder is often a little questionable.

It seems to encapsulate the many things that are wrong with Tinder all in one go - which is actually quite impressive, in a really depressing way...

This sixty-nine (geddit) year old "Handy Man" has been taking the internet by storm for having the most amazingly hilarious Tinder profile out there.

His bio is a work of art.

"I'm a single attractive [sic] man looking for a woman to cook me supper," Bill begins.

He seems to have some pretty "traditional" views.

"I ain't got time for no games because I work and only have time for hanky panky ok."

And he has some pretty high standards.

"The woman I chose must be fisically fit too, because I am pretty much a clisedale ok."

There are some things Bill won't budge on.

"I don't want kids so don't be asking me to make you a baby Karen."

Hey, he knows what he likes.

"Macironi and cheese is my favorite food but not Kraft ok."

Bill has some strong musical opinions, too.

"Hall and Oates make good music." Each to their own, hey?

But even better than his bio?

It has to be his profile pictures. Bill is truly a talented model!

And Bill is thicc.

You've got to admire a man with confidence.

Some conversations with the elusive Bill have also surfaced.

And it seems he's just as funny one-on-one.

You've got to hand it to Bill.

He knows exactly what he wants - and he's not afraid to stand up for himself.

And if you thought Bill was the worst?

Eagle-eyed profile viewers also noticed that Bill may not be as loyal a partner as you'd hope.

And some made this point.

Perhaps Bill is actually a genius?

Either way, Bill has brought some light to the dark, dark world of Tinder.

And for that, we have to thank him (and his incredible t-shirt). Want to see a Tinder exchange which is less amusing? Scroll on for one woman's incredible response to her online dating fat-shaming.