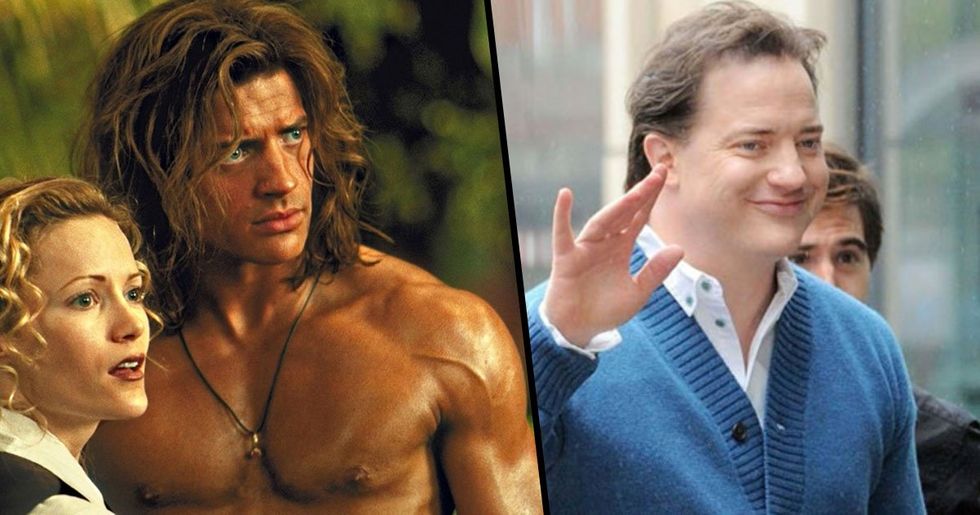 Someone Shamed Brendan Fraser on His 'Deteriorated Looks' and Got Destroyed

Hollywood star Brendan Fraser slipped off the radar a while ago.

Once a total heartthrob, the George of the Jungle (1997) actor sailed through the 90s as the go-too chiseled male lead.

Fast forward to now and Fraser is almost unrecognizable.

I mean surprise, surprise a guy in his twenties looks different at fifty...

The thing is though, part of the reason Brendan Fraser looks so different is that he's had an extremely tough time. The star opened up about his difficult years recently, in a tell-all interview with GQ.

Once the butt of many a joke, fans are now leaping to Fraser's defense and shaming anyone that makes fun of the actor.

Brendan Fraser was the ultimate eye-candy.

Back in the mid-90s, Brendan Fraser was the sort of guy you would have plastered on your bedroom wall.

Fraser was a go-to romantic lead.

Alongside the likes of Depp, Di Caprio, and Damon there was Brendon Fraser.

Fraser was taken off the market in the summer of '93.

Meeting at a house party at Winona Ryder's house, Brendan fell head over heels for actress Afton Smith. The couple dated until 1998 when they got married. They have three sons, Griffin Arthur Fraser (born 2002), Holden Fletcher Fraser (born 2004), and Leland Francis Fraser (born 2006).

In an unexpected turn, things soured between Brendan and Afton. The couple announced their divorce in December 2007. Things didn't seem to be left amicably, following a messy divorce that saw Fraser returning to the courts in 2013 petitioning for a reduction in alimony. According to Fraser, he wasn't able to afford $900,000 a year in spousal support. This led to Smith accusing Fraser of hiding assets.

What happened to Brenden Fraser's career? He came out about being sexually assaulted by a male Hollywood producer w… https://t.co/EISye1EtjL
— Alex (@Alex)1537584979.0

I did say Fraser hadn't had an easy time of it... Back in 2003, Brendan was sexually assaulted by Philip Berk, the President of the Hollywood Foreign Press Association. This along with his marriage falling apart left the actor spiraling into a deep depression.

Since people got wind of how much the nineties heartthrob has changed, Fraser became a bit of a running joke.

Which is what led to the recent Tumblr thread...

One Tumblr user posted a side by side comparison of younger Brendan Fraser with one of the unflattering images of the actor circulating online. The user expresses that they think about the seemingly dramatic change a lot.

People were quick to defend Brendan.

A comparison which might have been found funny some years ago is no longer a cause for jest. His GQ interview in 2018 revealed, the often reclusive actor's struggles with depression, his difficult divorce, the sexual assault and the multiple operations he had to get following some of the dangerous stunts he performed earlier in his career.

Users rallied around to correct anyone wanting to make fun of Brendan by educating them on what awful things the actor has been through.

Users were also quick to point out that the comparison was unfair, in that the paparazzi shot caught Brendan at an unflattering angle.

Pulling up a picture from Brendan's GQ photoshoot, the fan proves that he isn't actually bad looking.

No-one seemed to think there was a time or place to be joking at Brendan Fraser's expense.

The love for Brendan Fraser in this thread was clear for all to see.

Fans were also quick to point out that we're all going to age. The fact that a fifty-year-old Brendan Fraser doesn't look like his twenty-something self shouldn't really shock us. Saying that, most people in Hollywood get so much work done, the concept of aging has perhaps become a little confused.

Without the aid of cosmetic surgery, dolphin tears or Angelina Jolie's cheekbones, we'll all probably age in a similar way to Brendan Fraser.

People that found their way onto the thread seemed to appreciate those informing the public about what had happened to Fraser.

The actor has been doing much better.

In the last couple of years, since opening up publicly about his battle with depression, his divorce, and the sexual assault, Brendan seems to have come into himself. He is no longer shying from the limelight and has even been acting again.

You can catch Fraser on a number of great shows.

The actor has recently starred in the Showtime hit The Affair, FX's Trust, and is even starring alongside John Travolta and Morgan Freeman in a thriller, The Poison Rose (2019.)

So take that, haters.

Brendan Fraser is doing just fine and doesn't give a damn about the memes. We all grow up, right? Even Dicaprio is gonna get old someday... just you wait. Speaking of growing up... continue scrolling for a list of child stars then and now. Some of them really will surprise you!