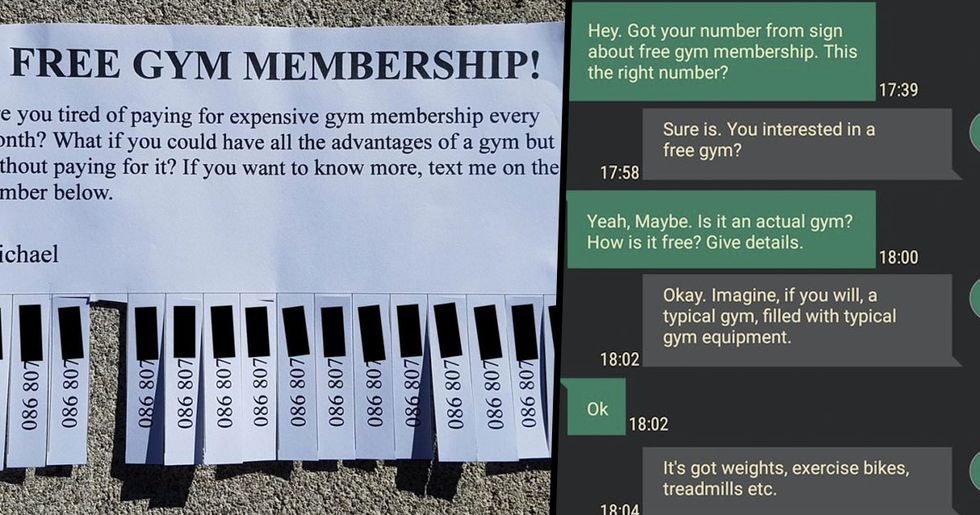 Someone Started a 'Free Gym' and the Text Exchanges Were Hilarious

Trolls. They're the unsettled, meddlers who patrol the plains of the internet with a single minded set of goals: to disrupt, to annoy and to generally frustrate. No one truly understands the troll's motivation for being a troll - are they parodic? Satirical? Nihilistic? Are they even any of those things? It's hard to know, but one thing's for sure - they don't tend to be very funny.

But, for one Twitter personality, known as 'Sir Michael', the art of trolling (if one could call it that), has been taken to new heights as he comes up with new and creative ways to be a dick to unsuspecting people. But, it is pretty funny. 'Sir Michael' trolls his town with a 'Free Gym', trolls the BBC with ridiculous show proposals, and even NASA with one wonderful request.

Trolls think they're so funny - or maybe they don't? No one really knows? They just kind of exist. However, one of them is proving new ground - check him out...

His name's Sir Michael, he's a professor of 'Bear Studies' at Harvard University, and he's got over 62,000 followers.

Sir Michael's weapon of choice tends to be a tear-off notice. Passers-by tear off the number, text their interest and the trolling begins. Here's one for a 'social media experiment'.

When his unwitting victim texts in, Michael begins to confuse them by being... well... weird...

Soon the victim starts to become bewildered by Sir Michael's drawings and ideas, that seem to be conceived by some kind of well-meaning child.

And soon, the only rational response from the victim becomes 'FFS', a universal expression of fulfilment.

Here's another tear-away notice for a 'free gym membership'.

They must know something's up when they see his weird drawings.

So, is this a gym or an investment opportunity? Where is the gym? Is it invisible? Can I touch it with my hands?

The moment this guy realises he's been duped is hilarious. It's also the deliberate slowness of the troll's execution.

But it doesn't end there, Sir Michael also writes in to various places, making them look stupid when they're forced to level with him.

Two decimal places of Pi, and still wrong - surely they know this is a joke?

These proposals are so good. Why is he so obsessed by bears? I think my favourite is 'Fresh Prince of Bel-Bear'.

The following proposal is definitely my favourite one. Drum roll please!

And then there's the notices...

Sir Michael also trolls his town, by leaving notices like these around the place.

'While many lawyers win their cases with knowledge... I win mine with karate.'

Very important new poster I stuck up in town today. I am launching the service that people didn't know they needed https://t.co/qMt0F2Rn84
— Sir Michael (@Sir Michael)1537298969.0

Here's more from the progenitor of the 'bird box challenge'.

This one is so cute. 'Three of them are about dolphins...'

Stuck this poster up in town today. Excellent job opportunity for any ambitious go-getters out there. https://t.co/QuqLf7oHBi
— Sir Michael (@Sir Michael)1449864548.0

'We break into their house and put all their DVDs in the wrong cases...'

Wait until you see his cunning plan to get a free haircut... it's wonderful.

Here's the sign. I have to say, it does look intriguing.

As always, he first puts out his lure, sounding just about reasonable.

Then the weird drawings start to make things odd. I do love his use of wigs in the idea though.

I do feel for him. I don't what I would say in his situation.

Okay this is the last one.

It's a free horse-riding lesson, only with a twist. Just wait...

'Your horse-riding lesson will begin now...'

Perhaps one day £12,000 will be enough to buy one of his magnificent drawings.

This guy is a titan of his field, the above notice concerns a free holiday, if you want to see it, go check out his Twitter account here.