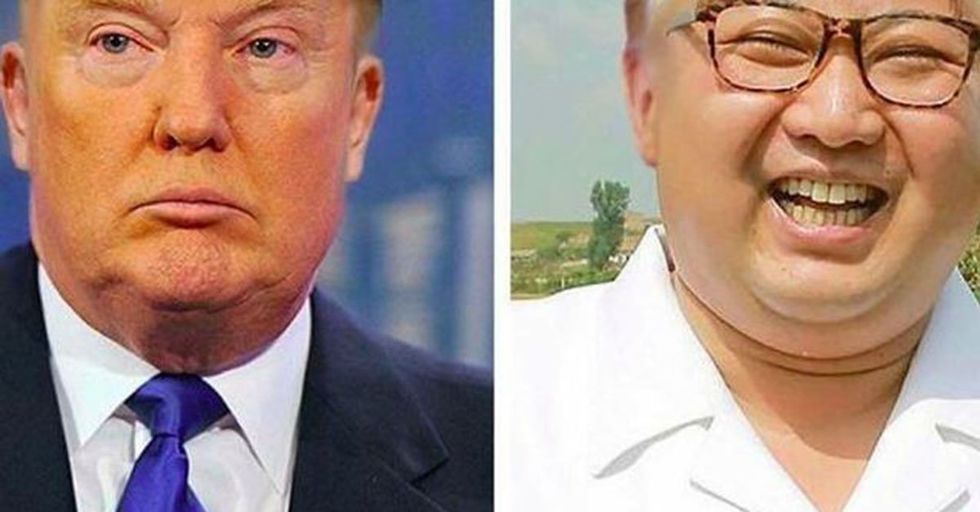 Someone Swapped Donald Trump and Kim Jung-Un’s Hair and...It’s a BIG Improvement for Both

Donald Trump and Kim Jung-Un are certainly known globally for their roles as the leaders of the US and North Korea, but there's another feature they share.

They both have really, really, uh, "unique" hairstyles.

To put it delicately.

Amid the escalating tensions between the two countries, Redditor GallowBoob decided to have a little fun with the leaders and their notable hair.

And you're gonna want to have your mind soap ready to wash your brain clean afterward.

Currently tensions between the two countries are probably at an all-time high.

But maybe if the two world leaders exchanged grooming tips they could set aside some of their differences?

Donald Trump is known to speak his mind.

And he's become a meme for his thoughts on NAFTA, when he said "NAFTA is the worst trade deal maybe ever."

Well, we don't know how the outspoken President feels about the hair swap.

We don't think it's really that bad. (Okay, it's bad.) Prepare yourself.

Here it is, folks.

The switcheroo of hairstyles between two very prominent world leaders.

Don't stare at it too long.

Sometimes, people get so caught up in wondering if they could that they never bothered to wonder if they should.

I mean, it's an improvement for Kim at least. Donald, not so much.

Granted, we might just be thinking that because Kim is smiling, a sight we rarely see.

But we can always choose to believe he's smiling over his wispy golden quaff. What about Trump though?

Well Trump, on the other hand, looks a little dour.

I never thought I would see the day when these two were compared. But...yeah. I can kind of see it.

I wouldn't bank on either one breaking from their current styles anytime soon.

But with all the madness in the world, this, at the very least, is good for a chuckle, no?

I mean, it's definitely not the WORST proposed hairstyle we've seen for Trump.

I think this Photoshopped man-bun takes the cake there.

As for Kim Jung-Un, well, his current haircut might be the worst we could imagine.

Who would have thought that giving him Trump hair would be an improvement?

Now if you'll excuse us, we have to go try to remove that image from our memories permanently.

At the very least, this produced a couple interesting Halloween costume ideas.