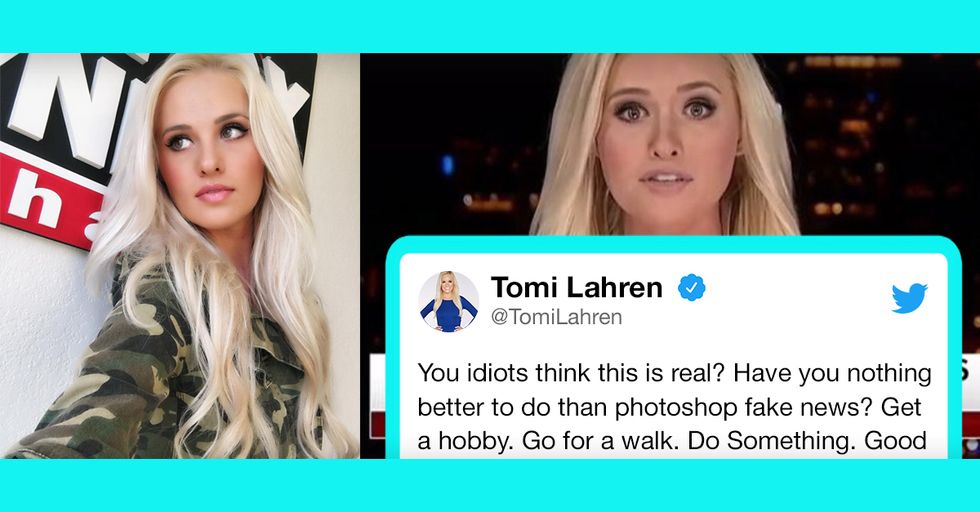 It's a widely known saying – do enough unto others, and eventually they will meme unto you.

Okay, so maybe that's not the actual saying, and also, maybe (just maybe) those words don't make any sense. The point is, piss people off enough, and it won't be long before they turn you into an unflattering meme with just enough of a semblance of believability that other people will believe it and come after you for it.

Fox News contributor and noted rabble-rouser Tomi Lahren was the subject of one such meme this holiday weekend.

Fox News contributor Tomi Lahren is known for her offensive and outspoken beliefs. She has railed against feminists, athletes, Black Lives Matter (which she termed "the new KKK") and while asserting that she "doesn't see color," and, furthermore, has a special fondness for the pejorative phrase "liberal snowflake."
In fact, Lahren uses the phrase "liberal snowflake," or its close cousin "millennial snowflake" so much that she has experienced several social media backlashes over her misuse of the words, and, indeed, her aggressive and willful lack of understanding about sensitive issues in general.
As a reminder, Lahren, currently aged 25, was only 22 when she applied for an internship at One America News Network, and got her show instead – On Point With Tomi Lahren. From there, she then hosted a show on TheBlaze, where she railed against liberal snowflakes until she was "banned permanently" when she made the error of vocally espousing pro-choice comments on The View.

The point is, Lahren has made an entire career of off-color remarks and virulent hatred, which is why people weren't entirely surprised this Christmas season when they saw an image of her floating around the web with the chyron, "Tomi: Obama Created Festivus To Destroy Christmas" affixed to her image.

The image seemed like peak Lahren. There she was in all her blonde glory, mouth half open as if to deliver a pithy takedown of minorities, immigrants, liberals and the like, the Fox News background behind her.
Even better, the chyron referenced Festivus, a made-up holiday that debuted in winter 1997 during the Seinfield episode, "The Strike." Festivus, a secular sendup of winter holidays had actually been created in the 1960s/70s by the father of Seinfield writer, Dan O'Keefe, and was something of a humorous holiday.
Instead of a Christmas tree, there was an aluminum festival pole, and instead of giving thanks, there was the ceremonial airing of grievances – although the original holiday was reportedly much stranger.
In any event, the tweet all seemed very real, especially considering that the man Lahren herself had endorsed for president the previous year, Donald Trump, was also engaging in a Twitter brouhaha of his own, since he'd just falsely claimed to have saved the phrase "merry Christmas" from a liberal backlash.
Indeed, it was the perfect confluence of events. Blonde, hateful Lahren, Obama, the man she'd hated so long (who many of her followers still believe is an undercover Muslim immigrant out to destroy the American democracy) and, of course, Festivus – the make-believe holiday to tie them all together.
There was only one problem, however, the image wasn't real. It had been created by Twitter user, @Seinfeld2000, who quickly took credit for the doctored image.

lol i photoshoped this https://t.co/kg0oZwZW8J

By then, however, it was already too late.

The meme had spread so far, even actual Seinfield actors were fooled by it. Jason Alexander, aka George Costanza, the man whose father utters the fateful words, "...A new holiday was born … a Festivus for the rest of us!" took to Twitter to express his annoyance.

Ok, so can we now all agree that this woman is either batshit crazy or that she will say anything for money? https://t.co/XoIjz2ymI5
— jason alexander (@jason alexander)1514278137.0

Other people, however, had doubts the tweet was real.

please tell me this is real

Yet more others found it interesting that people did not doubt the tweet's veracity.

My fav part of "Tomi Lahren says Obama created Festivus" is how many ppl found it so utterly believable.

The Tomi Lahren festivus picture is fake but it says so much about her that people thought it was real.

Finally, on Christmas Eve, Lahren took to Twitter to defend her own honor.

You idiots think this is real? Have you nothing better to do than photoshop fake news? Get a hobby. Go for a walk. Do something. Good Lord. https://t.co/tAVh7Vy3n0

Does it not bother you to circulate a photoshopped piece of FAKE NEWS? Classy. https://t.co/hvwdgwPkd2

Hello there, do you realize you are circulating fake news? Not very professional Dr. Allen but by all means please tell me how stupid you think I am... https://t.co/qlg4RzTEFP

While her exasperation was undeniably justified, other people had thoughts.

What's the matter @TomiLahren ? You can dish it out, but you can't take it? I'm sorry, are you feeling triggered? Do you need a safe space?