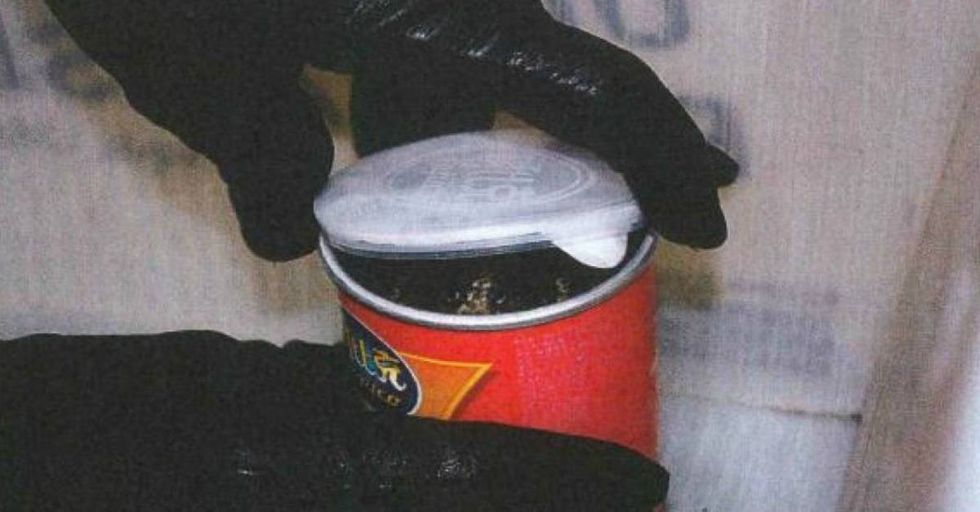 Something HORRIFYING Was In This Can of Potato Chips

First things first: I'm a snacker. A BIG snacker. Like, meals are fine, I guess, but if I am left to my druthers (and I often am) I would choose to just snack all the live-long day.

Needless to say, this story has upset my snack loving psyche very, very much.

Picture yourself sitting at home on a lovely sunny, Summer afternoon. You've got your feet up, some groovy tunes are playing — nothing could possibly be better.

Except maybe a snack. But little did you know, that just mere feet away from you in your kitchen pantry, a horror-filled nightmare was waiting for you.

You feel peckish so you stroll on over to the pantry and open up the door. You were at the store earlier in the week and you have a lot of exciting options inside: Popcorn, granola, and peanut butter.

But one bag in particular catches your eye: Potato chips. Yum. So you grab the bag and walk back to your comfy sunroom chair. You kick your feet back up and tear open the bag's perforated seam. Excitedly you reach into the bag expecting a handful of your favorite salty potato shavings, but instead you find something else. Something alarming. Something disturbing. You find...

While, thankfully, this exact scenario didn't end up happening, it easily could have if it wasn't for the quick-thinking of our trusted U.S. customs agents.

According to NPR, Rodrigo Franco, a man from Southern California, was attempting to import a package of illegal King Cobra snakes from Hong Kong when agents received a tip that live animals may be in the package.

NPR added that agents opened the package and found the three snakes being shipped in potato chip containers! WHAT?!? MY PRECIOUS! AHHH! They also found three albino Chinese soft shelled turtles, but who who cares about them?!? Customs let the guy keep those because bringing those into the country is legal and even if it wasn't, who are those precious little guys going to harm? Franco claims that he had previously imported as many as twenty King Cobras in prior shipments, but all of them had died during transport. Well boo-hoo for him!

While the man may have claimed he was simply smuggling them in for himself, we've all had mail sent to the wrong address before. What if this package of perceived nourishment made its way to grocery store shelves?

You might have been attacked by a venomous snake! And you thought your hunger was making you cranky, BEFORE!

Thankfully, the snakes were confiscated and the attempted snake-smuggler was arrested.

He is facing 20 years in prison for violating the Endangered Species Act and falsifying customs records.

So what happens next for our slithery friends?

Well, that is to be seen. Will they be sent back to Hong Kong? Will they be set free here in the states? I SURE HOPE NOT! But one thing is for sure: They won't end up on your grocery store shelves!