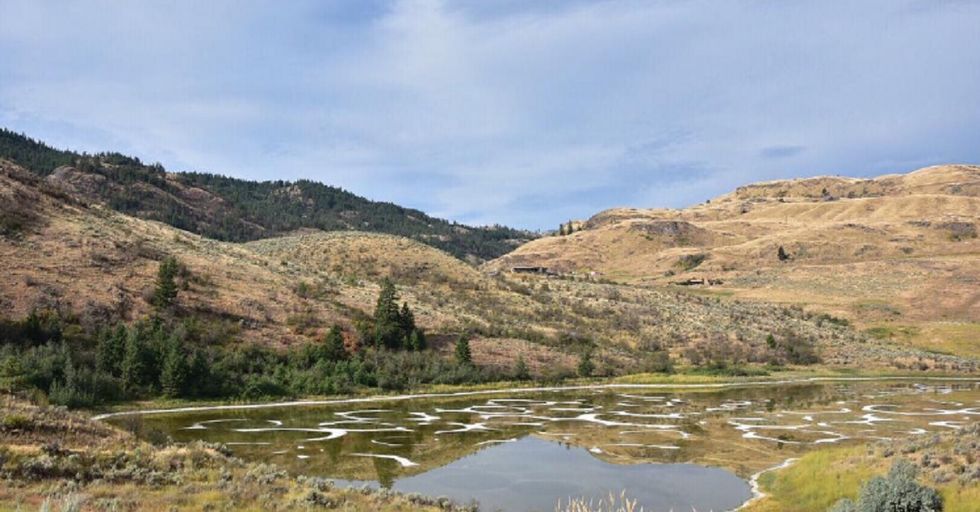 During the colder months, Spotted Lake's name might not make sense to the casual observer. But when the weather heats up, the lake transforms into a mineral-rich collection of pools that are quite a thing to behold. Seeing the phenomenon up close, though, requires some legwork. You need permission from the local tribes who hold the lake sacred — and from the lake itself.

The so-called Spotted Lake, in the eastern Similkameen Valley of British Columbia, looks like any other lake most of the time.

It seems like a fairly unassuming body of water, stretching only half a mile long and less than half a mile wide. But what you can't see is that the lake is extremely salty, and therefore supports very little life.

But when the summer comes and the lake heats up, it's a different story.

Once the water evaporates, the lake becomes a collection of mineral pools of all different colors. And suddenly the name makes sense. But the striking appearance is only the beginning of what makes the lake so interesting.

The lake is also sacred to the local First Nation peoples.

The Okanagan call the lake "Kliluk," which is what they also call the minerals they've drawn from the lake for healing purposes for millennia. They say the lake has a spot for each day of the year, and they aren't far off. It's estimated there are about 400 mineral pools during the summer, including a high content of Epsom salts (the stuff that may help relieve symptoms of rheumatoid arthritis).

But the sacredness of Spotted Lake isn't the only thing that makes it special.

Many scientists believe the lake's unique conditions resemble those of ancient lakes on Mars. This has made the site a valuable resource for geologists, who've found the mineral makeup of Spotted Lake to be, in fact, very similar to what's been discovered on Mars.

Many of the lake beds found on Mars share conditions with Spotted Lake.

Unlike many lakes, this one doesn't have streams attached to it, providing water from an outside source. There's a term for that: "closed-basin." Many of the lakes discovered on Mars have also been deemed closed-basin. But getting close enough to the Spotted Lake to study it is not as simple as taking a stroll off the highway.

Most visitors to the lake are only allowed to view it from the nearby highway.

It's important to give an offering to the lake.

The First Nations do this to let the lake know they're approaching, pay tribute to their ancestors, and honor the sacredness of the area. The offering can be something as simple as water, but even if you arrive empty-handed, you can still show respect. Walking around the entire lake is considered an acceptable substitute for those who are unable to offer anything, according to Bob Etienne, a holy man and member of the Osoyoos Indian Band.

Spotted Lake has not always been so well-protected.

In World War I, minerals drawn from the lake were used to manufacture ammunition, a far cry from the healing purposes these waters were originally known for. When in 1979, the family that owned the lake attempted to open a spa on it, the First Nations stepped in to purchase it and protect it as a sacred site.

Though they're kept at a distance most of the time, the site is still a spectacular thing to see. There's even a local helicopter tour for those who want to take in the lake from above. So there are plenty of ways to enjoy this natural wonder in a safe, respectful way.

Or, you know, you could rely on drones.

Drones can actually provide a great view of Spotted Lake without disturbing the sacred site, especially for those who can't make the trip to British Columbia. Though of course, taking in a natural site from the comfort of your home or on your laptop is nothing like the real thing.

The pools have been described as having a "bathtub ring" texture, and, due to the high sulphur content, can give off an odor similar to rotten eggs. Making it a site to see, but maybe not one to smell. So if your find yourself on a late July road trip through British Columbia, go west on Highway 3 from Osoyoos, and make a quick stop to take in the view. Your Instagram followers will thank you.