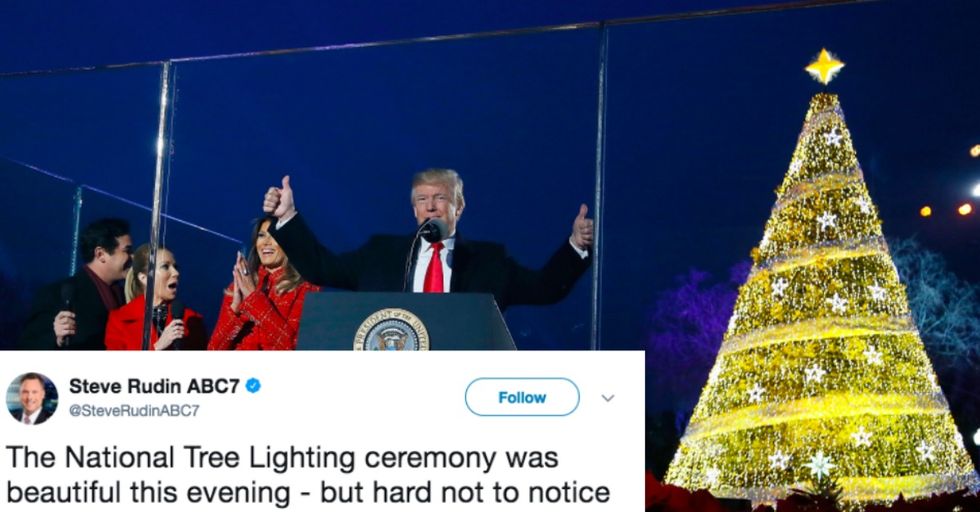 Donald Trump was very excited about the White House Christmas Tree Lighting this year, which makes it all the more entertaining that there was something glaring missing from the ceremony.

On November 30, the Trump family lit up the giant tree, which only further illuminated the problem at hand. Apparently, Donald Trump can't get anything right, not even a Christmas tree lighting.

According to Donald Trump, the White House Christmas Tree Lighting was a day that he's "been looking very much forward to all year long."

"It's one that we've heard and we speak and we dream about and now, as the President of the United States, it's my tremendous honor to now wish America and the world a very Merry Christmas," Trump continued. Really? November 30 is the day you've been dreaming about? Not even Christmas itself?

We have a theory as to why Trump was so excited for this day.

And no, it doesn't have to do with all the bright lights mesmerizing him like a small child, although we're pretty sure that's also a reason he was happy about the tree lighting.

Donald Trump was so ecstatic about the tree lighting ceremony because he thought this was his chance to "save Christmas."

As we all know, there's been a "war on Christmas" happening ever since someone decided "Happy Holidays" was a nice phrase. And Trump is convinced that now that he's in the White House, he's bringing Christmas back to where it belongs: the federal government. Unfortunately for him, he's wrong.

In any case, the Christmas tree lighting went fairly smoothly, if you can believe that. But there were a few unforeseen surprises...some positive, like Melania's smile.

Look at it! She's actually smiling. Sure, it looks sort of manic and plastic, but it's a smile. That's better than the initial photos that were taken of her supposedly "enjoying" her White House Christmas decorations.

But there was still something glaring missing from the White House Christmas Tree Lighting. Surprisingly enough, it wasn't Tiffany.

That's right. Tiffany Trump was in attendance. So if Tiffany was there, what could have possibly been missing?

It was the audience.

There were so many empty seats at the tree lighting ceremony it was embarrassing. Or was it? It's cold in November in Washington, D.C. Maybe thousands of people don't usually attend this event.

But no. They definitely do. According to ABC7 reporter Sam Sweeney, the tree lighting is usually packed.

"Standing room only," in fact. But no one had to stand at Donald Trump's Christmas tree lighting. In fact, people who were there could have probably taken five chairs each! One for their bum and four for each of their limbs.

You know the comparison was coming. Here's the crowd at last year's tree lighting:

Seems like quite a few more people than this year's, if you ask us. What was the difference again? Ah yes, Barack Obama was still the president.

In fact, there seems to be a pattern emerging when it comes to Trump's festive White House celebrations.

Translation: Donald Trump is bad and people don't like him. Merry Christmas indeed!

This must've been the moment they told him that the crowd that showed up couldn't even fill a Krispy Kreme donut.

Seems like Trump didn't quite save Christmas like he'd hoped. Maybe he's better off celebrating Chanukah with Jared and Ivanka.