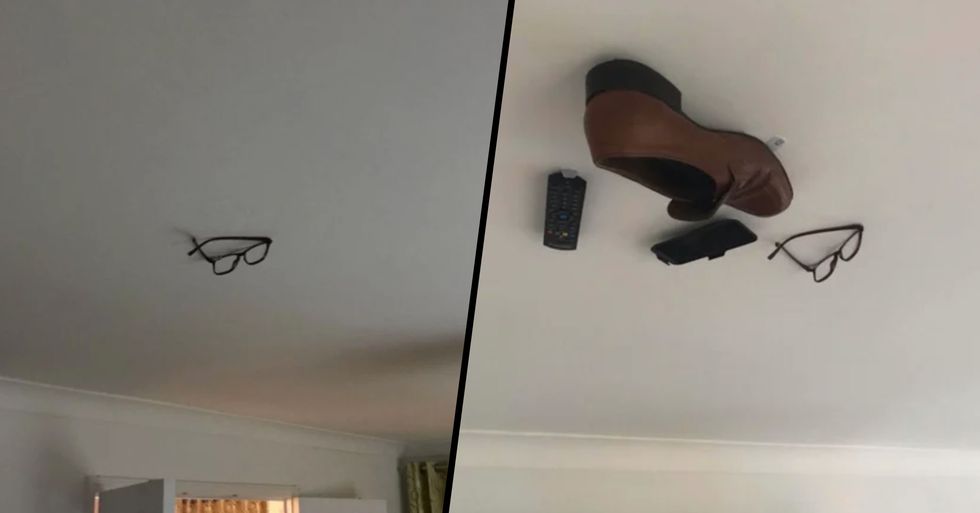 One young man has been hailed as a total hero after he documented his ingenious prank against his dad, which involved him gradually sticking random belongings of his to the ceiling without him noticing.

The prank, which he shared onto Reddit, went on for an incredible 5 days.

Keep scrolling to see photographs of the son's ridiculous antics, and to hear about his dad's incredible reaction...

We all love a good prank.

Well, we all love conducting a good prank... Not the other way around.

And Reddit user, SeamanTheSailor, takes the crown for the best prank ever.

The man, who is based in the United Kingdom, took to Reddit to share his prank against his poor, unsuspecting dad.

The young man took various belongings from his dad and stuck them to the ceiling.

Random objects. Stuck, upsidedown, to the ceiling. How on earth can this be pulled off?

Using a cunning combination of Blu-tac and sticky command strips...

This young man was able to successfully stick a variety of his dad's belongings to the ceiling.

And it took his dad days to notice.

It sounds completely ludicrous, I know. How on earth do you not notice random objects glued to your ceiling?!

Well, apparently they're harder to spot then one would assume...

And, luckily for us, this ingenious prankster documented his work in day-to-day photographs posted to Reddit.

It started out nice and simple... A single pair of glasses. Though the man had to clarify that these glasses were simply his dad's "readers", as he "isn't that evil." Captioning the hilarious photograph, he wrote: "I stuck my dad's glasses to the ceiling. For every day he doesn't notice, I will add another of his possessions."

Surely you'd notice a pair of glasses stuck to your ceiling, right?

Well, apparently they can be much more inconspicuous than you'd think because they went by unnoticed for the rest of the day.

As promised, the mischevious boy added another item to the ceiling after his dad failed to notice his missing glasses - This time, it was his phone case.

Yep, the poor man still hadn't noticed his ceiling's peculiar additions. And, to celebrate such an incredible achievement, the son decided to go all out but sticking a full shoe to the ceiling.

Now, you'd need an awful lot of Blu-tac to keep a full shoe up there...

The prankster admitted that, initially, the shoe kept falling, so he had to rethink his strategy... Which resulted in him simply adding extra command strips. Too easy.

Yep, they're still hanging in there. To commemorate the fourth day of random objects going unnoticed on the ceiling, the prankster decided to take one of the most prized possessions in the whole household... The TV remote.

Surely, the TV remote will be the final straw?

Because, once you've lost a TV remote, you know things are going to get serious.

His masterplan was finally rumbled. It turns out that the TV remote was the final straw because his dad finally noticed the collection of his belongings gathering on the ceiling.

Sadly, all good things must come to an end.

The magical prank that thousands of people had become so attached and committed to was finally over.

Followers of the intense drama praised the man for his creativity...

And as for his Dads reaction?

He took it remarkably well!

Instead of hitting the roof (no pun intended...)

His dad actually had a good chuckle... And a beer. "For those wanting to know my dad's reaction. He called me a cheeky **** then we had a beer together and I’m showing him all the comments on my posts. Thanks for the support everyone."

Keep scrolling to read about some of the best, and most importantly, doable pranks that you can get your friends and family with...