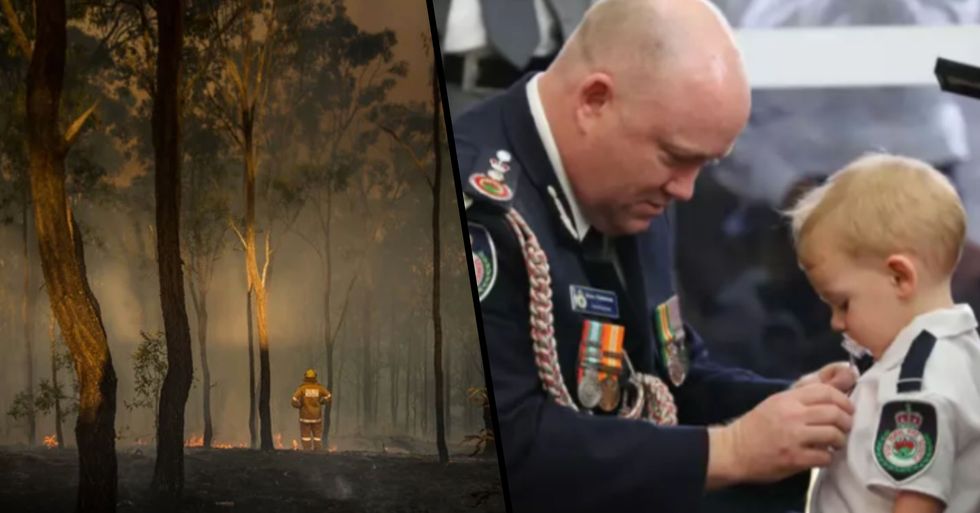 Many firefighters have risked their lives to battle the blazes, with a handful even losing their lives.

The son of one of the firefighters who tragically died in the fires has received a bravery medal in his honor and the photos will break your heart (but not before they melt it).

Which is a tragic and terrible loss for the communities in Australia.

This is an awful amount of pressure on the firefighters continuously tackling the blazes...

And it has proven to be too much for some.

2 volunteer firefighters lost their lives on duty 2 weeks ago...

Deputy Captain Geoffrey Keaton and firefighter Andrew O'Dwyer, both from Horsley Park Brigade, tragically died when the truck they were in hit a tree and rolled off the road on December 19 in Sydney's southwest.

A service was held for the fallen firefighters...

The service was extremely emotional...

And a beautiful tribute was paid to the 2 brave men who were trying their best to help their country.

A touching photo has been released by the NSW RFS...

Prime Minister Scott Morrison said they sacrificed their lives in the name of duty.
"They were bravely defending their communities with an unmatched spirit and a dedication that will forever set them apart amongst our most courageous Australians," he said.

They will never be forgotten.

"Their sacrifice and service saving lives and saving properties will be forever remembered. I wish those injured all the best in their recovery," he went on to say.

All we can do is hope that the fires will begin to dwindle.

RIP to the fallen firefighters of Australia, and we send our condolences and love to all of those affected by this terrible crisis.