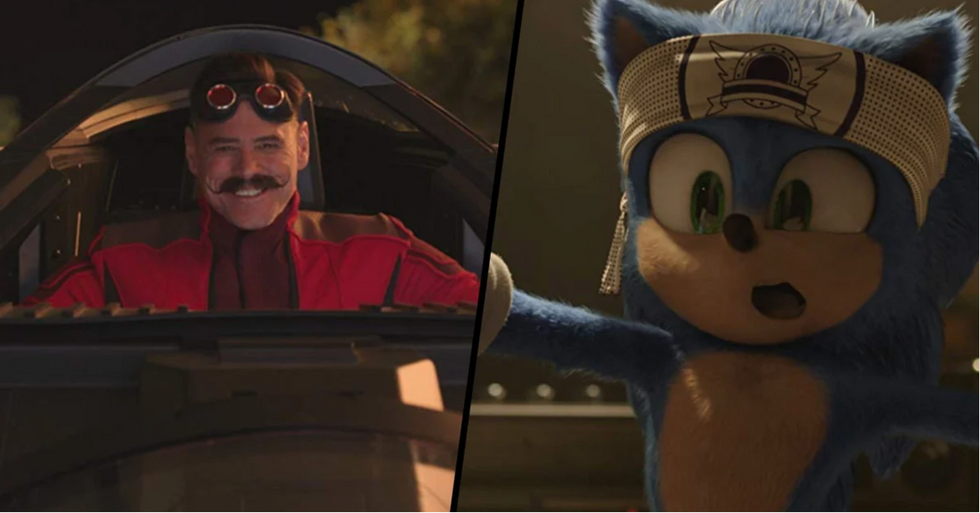 The film industry has been on a roll lately, producing work that seems to be resonating with the masses. From thrillers to comedies, each genre is getting their own spot in the limelight, which makes a nice change from the typical Hollywood blockbusters we were used to seeing on the big screen.

But now, one particular genre has stolen the top spot with audiences and it involves our favorite animated hedgehog, Sonic.

He is finally getting the recognition he deserves and all the post-millennials are more than happy about it... which has been proven by its success at the Global Box Office.

The video-game inspired movie took one of the most iconic pixelated characters and brought him to life in the world of cinema.

And they did a pretty good job...

During its first weekend at the box-office, it managed to accumulate $57 million and is already being hailed as one of the top-ranking films of 2020.

I mean, we saw the disaster that came with Max Payne (2008) and Alone in the Dark (2005) and we really didn't want another repeat of those box-office flops.

But it seems as if Sonic is going to be ranked amongst the other elite films.

I mean, Resident Evil stole the show with it's fresh feel-take on the video game and it was so popular that it got given 5 films after the original.

And how could we ever forget about Assassin's Creed?

This movie really helped the video-game industry break into the mainstream and garnered a lot of attention for its intense graphics.

And the latest addition to the top-rated films stars Sonic the Hedgehog...

It tells the story of a "small, blue, fast hedgehog" and "a small-town police officer must help it defeat an evil genius who wants to do experiments on it."

And I know what you're thinking, it doesn't sound too appealing, does it?

It seems as though it was a major hit amongst audiences...

The animated film got a 95% audience rating which means it ranks amongst some of the other highest rated films and as I mentioned previously, the box-office numbers don't lie.

It did way better than other films we hoped would smash the box office.

Harley Quinn's spin-off, Birds of Prey, only managed to hit the 17 million dollar mark while films such as Fantasy Island, flopped heavily, barely even hitting the thirteen million mark.

However, the war thriller went on to become one of the most coveted films of the year, sweeping up award after award so while the numbers don't lie, they also aren't the be-all and end-all.

However, while Sonic proved to popular with the fans, it didn't seem to rank too well with the critics...

With a lowly score of 63%, it proved to be a disaster with film experts. I use the term "experts" lightly because clearly, they don't understand the overall importance of an animated, blue hedgehog and how he shaped all of our childhoods.

One review by Variety addressed all the issues with the film head on...

Owen Gleiberman gave us his take saying, "Their truly epic bad decision, far worse than the original fussy humanoid design of Sonic, was to make the “Sonic" movie into one of those clunky live-action adventure comedies with a digitally animated generic weisenheimer plopped into the middle of it."

"The trouble with this form is that the live-action setting inevitably results in a cloyingly cheerful camp-sitcom woodenness — in this case, the tale of how Sonic buddies up with Tom Wachowski (James Marsden)... Wherever they are, though, they’re an odd couple rotely snarky enough to make your lids droop."

"Sonic the Hedgehog does perk up, sort of, when Jim Carrey is onscreen as the evil Dr. Robotnik, whose origin story this basically is."

"As a movie hero, Sonic could (and should) have been hipper and sharper, less megaplex arrested. Even as they fixed his face, the filmmakers strove so hard to make him “likable" that they never figured out a way to make him cool." Savage or what?

Regardless of the critics' reviews, it doesn't change the fact that it ranked so well with fans...

Many fans were excited to see their childhood hero grace the big-screen and they commended the director, Jeff Fowler, for keeping Sonic's original roots.

Fans expressed their love for the movie on Twitter...

I loved the Sonic Movie. Many people did. If you didn’t like the movie, that’s fine. But don’t attack the audience/… https://t.co/3YwEEcTGAC
— Sam Procrastinates (@Sam Procrastinates)1581795847.0

This user absolutely loved the movie.

It also cemented it's legacy in the world of film by breaking a record.

Sonic became Paramount's video game movie's 3-day opening in the US, as it beat Detective Pikachu's $54.3 million at the box office.

But with the most recent stats...

It turns out that the movie has now made more than $200 million worldwide.

This is a staggering achievement...

And considering that the movie is yet to be released in Japan (it will launch in March), this is an unbelievable success.

It looks like it is certainly a movie worth seeing...

Make sure to keep scrolling to check out how good Jim Carrey looks as the villain Robotnik...