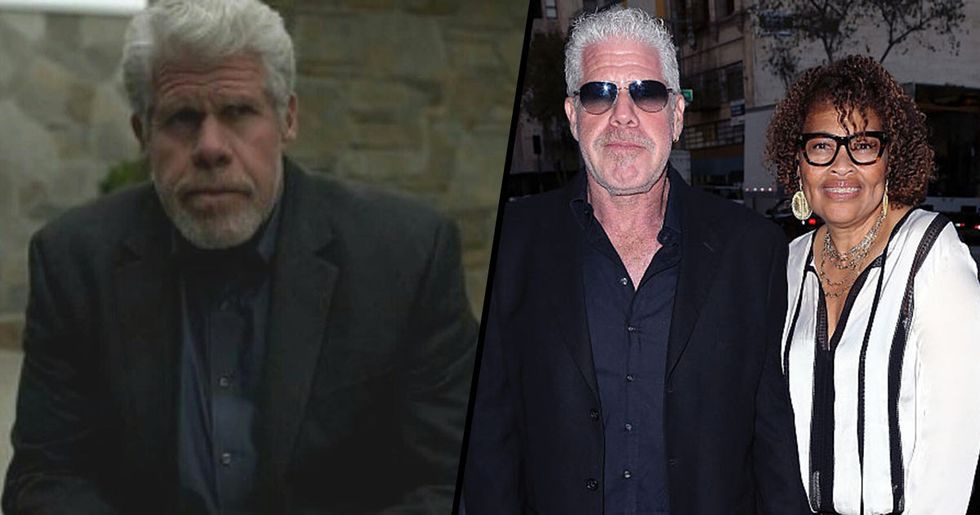 With almost four decades of marriage under the belt, a divorce can't be easy - never mind a divorce in the public eye.

Sons of Anarchy star, Ron Perlman, recently filed for divorce from wife, Opal Stone, bringing their thirty-eight years of marriage to an end. The revelation may not come as a surprise, though, since rumors of an open marriage have been circulating for months.

TMZ reported that the "Hellboy" filed for divorce on Tuesday, in Los Angeles. According to the divorce documents, the separation date was May 10th, 2019. Coincidentally, around the time that the sixty-nine-year-old actor was spotted kissing his StartUp co-star, Allison Dunbar, who he has since been leaving some flirty comments for on Instagram. Read on for the full story!

Ron married Opal, a fashion and jewelry designer, way back in 1981 on Valentine's Day.

The couple have two children together.

Appearing in various productions, Perlman started his acting career as a stage actor.

His first debut was in the science adventure film, Quest For Fire.

This role won him a Golden Globe Award in 1989 for Best Performance by an Actor in a Television Series.

Starring in the likes of Romeo is Bleeding, The Last Supper, The City of Lost Children and, more recently, Sons of Anarchy.

The Sons of Anarchy became cable FX's highest-rated series at the time.

With the average weekly viewers being 4.9 million for the 3rd season, it surpassed all other hit shows.

In the show, Perlman played Clay, a former International President of the Sons of Anarchy Motorcycle Club.

He played Clay from the seasons 1-6 until his character was shot.

He's also starring in several films due to be released this year and next.

Perlman is due to star in Hell on the Border, NYX, The Jesuit, and, The Big Ugly

Despite Perlman only filing for divorce on Tuesday.

It seems that it has been decided privately for a while with the divorce documents stating the separation date as May 10th.

In the documents, Perlman also states that, if there is spousal support to pay, he will pay it to Stone.

So there is the possibility that Ron will be paying Opal on a monthly basis for a good while.

Rumors that the couple were on the rocks surfaced when Ron was pictured kissing StartUp co-star, Allison Dunbar.

The two met on set on the TV show StartUp, where they worked together.

The colleagues were spotted being openly affectionate coming out of Alexander Steakhouse in Pasadena, California on May 15th.

Which unbeknown at the time, was just days after Perlman and Stone had decided to split.

As it was only five days after the date of separation.

And then, just a few days after, they were spotted together again.

This time, they were walking their dogs together.

Ron has not shared an image of his partner on Instagram since 2018...

When he reposted an Instagram post that his daughter had made - a picture of Opal Stone from 1987.

But he's featured many times on Allison Dunbar's Instagram.

Pictures suggest that the two of them hang out together a lot.

One picture even includes Allison sat with Perlman and his daughter, Blake.

Allison added a caption saying "The Perlmans and the Dunbars. Two dynasties collide over the avocado salad. Love my new friends a lot 🥑🥗❤️."

As he's been spotted leaving comments on Allison's Instagram pictures.

One picture captioned "Hello from my ass❤️💋🍑🍑🍑"shows Allison lay on a sun lounger in a bikini.

Ron replied in the comments "Hi back!"

But the comment didn't go unnoticed by fans, as they replied with confusion.

In response, one Instagram user wrote "Mr. Perlman, you're married..." whilst another wrote "Uhhhh." Yikes.