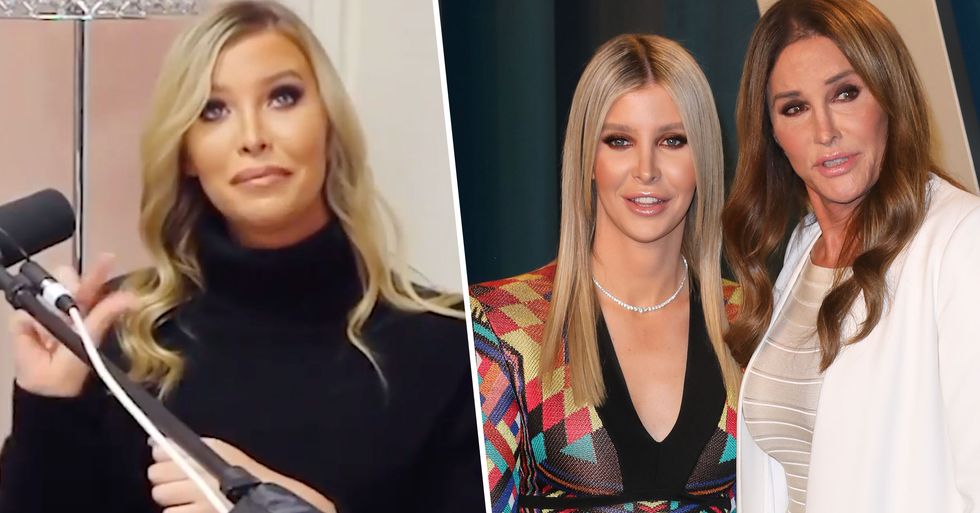 Sophia Hutchins, Caitlyn Jenner's partner, has finally cleared up the nature of their strange relationship.

When asked about sending a full airplane out just to pick up her mom, Caitlyn explained: "I know. What I told her: 'Isn’t Caitlyn a much better friend?' [...] he would never send a plane. No, no, no, what a jerk the guy was, OK, Caitlyn is like, 'Send the plane. Mom, we’re sending a plane, we’re going to go pick you up and bring you down here'... It seems like she has a lot more friends than he ever had."

The shocking transition understandably took its toll on her daughters, Kendall and Kylie. "My dad says it herself sometimes, it's kind of like mourning the loss of someone, because it is," Kendall said in a candid interview about Caitlyn's transition. "My dad is my dad, but he’s not there physically anymore. But she lets me call her dad - that's the last little piece of dad I've got."

But Caitlyn is through with caring and she is now living her best life.

She is now finally doing her own thing away from the Kardashians...

Including appearing on the British reality show, I'm A Celebrity Get Me Out Of Here last year, and proving to be a solid fan favorite.

But the one thing about Caitlyn's new life that has gotten everyone talking is her strange relationship with twenty-four-year-old Sophia Hutchins.

Sophia is also a trans woman and she was first introduced to Caitlyn a few years ago by her makeup artist.

Sophia works as a model...

And she has recently opened up in the past about how Caitlyn and her transitioning journey is a huge inspiration to herself and her own journey.

The pair struck up an unlikely friendship...

And they began spending a lot of time together - with Sophia even making appearances at numerous Kardashian parties as Cait's plus one.

Romance rumors began swirling when they made a red carpet appearance together in 2018...

Yet the pair continuously denied these rumors, insisting that they were just good friends.

And even when they moved in together...

They still continued to insist that they were "just friends."

Caitlyn eventually opened up later in 2018...

Speaking to Variety, she said: "We are not going to get into the rumors. But we are very close. We’re kind of inseparable. We’re the best of friends."

But when Caitlyn made Sophia, who was already her manager, the executive director of the Caitlyn Jenner Foundation...

It was clear to fans that this was more than just a friendship and a great deal of trust was obviously involved.

Sophia then said this about her relationship:

And it's clear that they're both in a very happy place.

It seemed as though we would never get a solid confirmation of the nature of their relationship...

But if they're both happy, does that really matter?

But in more recent times, Sophia has opened up about her and Caitlyn's situation.

Appearing on the Juicy Scoop podcast with Heather McDonald, Sophia has firmly clarified where she stands with Cait.

Heather asked about the rumors of them being a couple and how confused everyone was about their relationship.

Sophia explained that she first moved in with Caitlyn because of her job managing her and being the director of the Caitlyn Jenner Foundation - it just made life a lot easier, apparently.

She claims that there was never any romance between her and Cait.

Sophia then said, "It was never romantic. It was never sexual. It was very much friends."

She went on to describe the relationship as "parental" and even joked that Caitlyn gets to "sign off" on who she gets to date.

Sophia explained, "It's very parental, very protective. But, at the same time, it's also business-ey." "It's like we're family. All of my family is in Seattle... it's been nice to feel like you have a family where you're living."

Sophia went on to reveal that despite their friendship being strong, she is considering moving out of the Malibu house.

"I don't want to leave her by herself, but she also knows and I know that I'm getting older - like I want to be able to kind of have my own life."

She also claimed that Caitlyn "barged into her room" while she had someone with her and that this was happening more often.

"[She] kind of saw a lot of things happening, and so it's kind of like living with your parents. I'm like, 'Oh, this might be a turning point where I might need to move out.'" So it seems that they're definitely not dating, then...

Finally! We have a clear answer!

It seems that the pair have been telling the truth all along... they're just really good friends. Make sure to keep scrolling to read about the most recent Kardashian drama...