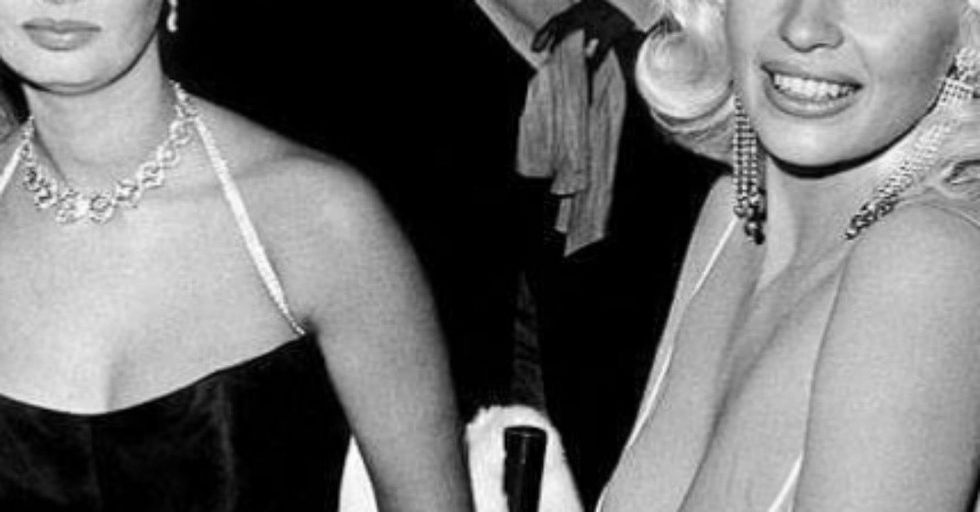 These days, Instagram feeds and Twitter threads everywhere are flooded with images of celebrities. We don't know them, but, in the day and age of social media, it's easy enough to get a good sense of who likes what, who likes who, and what brands the rich and famous can't live without.

But these finite details weren't something the general public was always privy to.

In a new book by People Magazine, called The 100 Best Celebrity Photos, a little light is being shed on some of history's most memorable snaps. One of these is an infamous picture of Sophia Loren, and the details she spills about it are something that social media (if it had existed at the time) would've jumped all over.

We get a little spoiled by social media.

It's an interesting time to be alive. At no other point in history has information about other people been so accessible. In just a few clicks and a scroll through any social media feed, we can glean loads of details on most of the people in our orbit. Family, friends, friends of friends — if they're on Instagram, Facebook, or Twitter, chances are you know what they had for lunch today.

That type of media means we can poke into strangers' lives as well.

With the tidal wave of social media came unprecedented access into the lives of the rich and famous. Sure, paparazzi, talk shows, and Entertainment Tonight have been around for ages, but with channels like Instagram, we not only started getting candid photos of celebrities, we got their comments and explanations to go with them. If a photo is odd, a celeb only needs to hop on Twitter to clarify what was going on, and all's well. Most of the time.

So in this age of 24/7 feedback, privacy can be a foreign concept.

It's hard to remember that this state of instant information wasn't always the norm. Celebrities of past decades enjoyed a little more privacy that today's ladies and gentleman who are front and center in the public eye. People like Paul Newman and Debbie Reynolds were also photographed constantly, but no one was tweeting which club they were spotted ducking out of at 2 a.m.

This level of privacy also contributed to confusing scenarios and mysterious photographs.

Back in the day, without the ability to instantly comment on photographs of themselves, celebrities tended to be at the mercy of whoever snapped an interesting picture and wrote a story around it. If they had an amazing publicist, chances are an intimate or confusing photo could be cleared up for the general public, but, sometimes, things were obscure or not commented on at all by the movie or TV star in question.

A new book is about to shed some light on certain, famous celebrity photos.

In what promises to be an extremely interesting collection, People Magazine has curated a treasure trove of  history-making snaps in its new book The 100 Best Celebrity Photographs. One photo in particular is the subject of the limelight once again, due to the mystery surrounding it. Thanks to People, what was an image shrouded in a bit of mystery is now getting a little clarification, 60 years later.

They were they "eye-daggers" heard round the world.

OK, maybe nobody heard anything, but the public got and eye-full when a photographer captured this famous shot of Sophia Loren and Jayne Mansfield. There's a laundry list of things to unpack here, but what stuck out to most was Sophia's openly incredulous look thrown in the direction of what was filling out Jayne's gorgeous dress. It's become one of the most talked-about celeb photos in history, but up until this point, people could only guess at Miss Loren's inner monologue.

Her career just taking off, the night this famous photo of Sophia was shot was a big one.

People's editorial director Jess Cagle says of the shot, “When we decided to put together a book of the 100 best celebrity photos, honestly, the first photo that came to mind was this one." And for good reason. This sultry snap was taken on the evening of a luxurious party thrown to celebrate Sophia Loren's deal she'd just signed with Paramount. The stunning Italian actress was ready to soak up all the attention that star-studded night.

A little backstory is important to understand the loaded photo.

To the casual observer, especially now that so much time has passed, it looks like Sophia Loren is simply giving Jayne Mansfield the stink-eye for no reason. But now that Miss Loren is finally commenting on the notorious photograph, it seems as though any ill-will was wrongly assumed. She says of the blond bombshell's arrival, "All of cinema was there, it was incredible. And then comes in Jayne Mansfield, the last one to come. For me, that was then it got amazing."

Jayne was on the guest list, but no one expected her to make such an entrance.

Loren now makes it clear that the photo wasn't her throwing serious shade at her lovely table guest, but instead, the sidelong glance was more along the lines of worrying about ... umm ... wardrobe malfunction: “She came right for my table. She knew everyone was watching. She sat down. And now, she was barely… Listen. Look at the picture. Where are my eyes? I’m staring at her nipples because I am afraid they are about to come onto my plate. In my face you can see the fear. I’m so frightened that everything in her dress is going to blow — BOOM! — and spill all over the table."

Even after all this time, the famous photo still piques the interest of everyday fans.

Decades later, Loren says fans still come up and ask her to autograph one of her most famous photos of all time. We can't blame them; that would be an amazing piece of celebrity memorabilia to sock away. But the superstar always refuses this request. Why? She respects Jayne's memory too much. Of turning down the chance to scrawl her moniker, she says, “I don’t want to have anything to do with that. And also out of respect for Jayne Mansfield because she’s not with us anymore."

Loren is still living a full and happy life.

While Mansfield tragically passed away at the young age of 34, Loren is still living life to its fullest and is recognized as one of Hollywood's most iconic stars. Though her spotlight might have been shared on that fateful night back in 1957, she doesn't dwell on it, and we're grateful to her and People Magazine for finally clearing up this intriguing celebrity mystery.