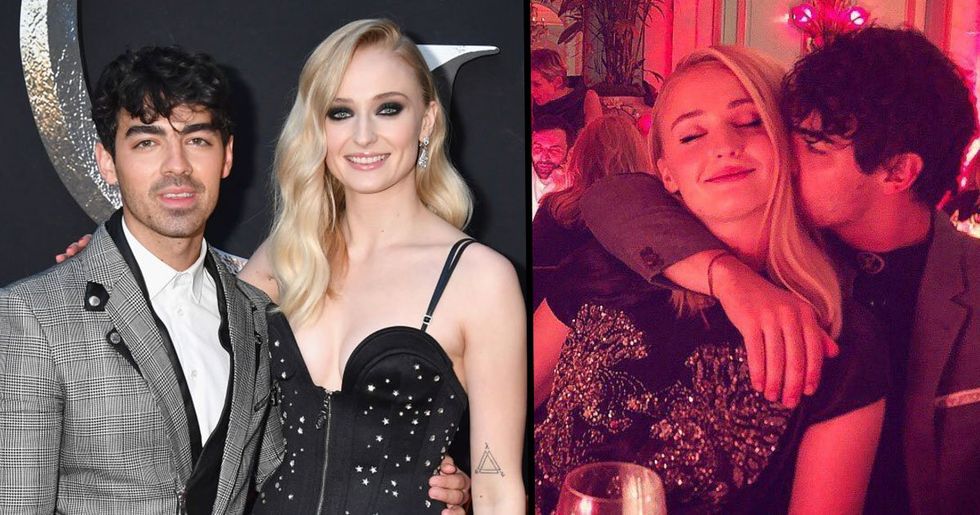 Sophie Turner and Joe Jonas Get Married in Las Vegas

The couple were first spotted together in the Netherlands in 2016 and they kept their relationship secret for quite some time before making it official.

After several public appearances and adopting an adorable Siberian Husky, the pair got engaged in 2017.

Yesterday, photos and videos started popping up on Instagram, showing Joe and Sophie (and Elvis Presley) at the end of the aisle at a Las Vegas chapel. Just hours after the Jonas Brothers performed live at the Billboard Music Awards, the couple got married!

Keep reading to see a video of the cute and a slightly awkward ceremony, and to find out why May 1st was the perfect day for their impromptu wedding.

Everyone knows Sophie Turner for her TV debut as Sansa Stark in HBO's Game of Thrones.

She's one of the few OG cast members that have made it to season eight alive, Fandom says.

But did you know that she was going to be a prima ballerina and chose acting over a spot at London's prestigious Royal Ballet School?

She was cast for GoT at only thirteen years old when a "nation-wide talent search" came to her school in Warwickshire, England.

He's not only a pop singer and musician, but actor and dancer too. Joe is best known for his pop-rock band, the Jonas Brothers.

He was also once a Disney star, playing Joseph Lucas in Jonas and, of course, he starred in Camp Rock.

In 2011, he released his first solo album, Fastlife, as he started to depart from the Jonas Brothers. In 2015, Joe formed a new band, DNCE.

As a couple, Joe and Sophie were first spotted at a Kings of Leon concert in the Netherlands, in 2016, People reports.

A fan who was also at the concert said, "They were really close together. They were kissing. She was all smiley and he looked really sweet." But they didn't announce their relationship publicly until much later.

After the concert, they were next seen spending Halloween together.

Joe was dressed as a dalmatian and Sophie was wearing "pink sequined bunny ears."

Then came Thanksgiving, and they still didn't say a word about their relationship.

They spent the holiday together after being seen leaving a hotel in New York.

"He thinks she’s a cool girl," a source told People.

"She’s always been into him, but he’s starting to like her more and more."

After the holidays, the couple attended a friend's wedding in Malibu.

There was a photo booth at the wedding and the pair made the best of it.

It was around that time that a source confirmed to People that Joe and Sophie were "exclusive."

"He was playing the field, but he really likes her and is willing to settle down for her," they added.

Finally, with the new year came the official announcement. Sophie uploaded a photo on Instagram of Joe wearing sunglasses and holding a cigar on a boat. Clearly, the couple were on a vacation together.

In April 2017, the couple were much less modest about their PDA when they were spotted walking down Ventura Blvd. in Los Angeles.

Joe had his arm wrapped around Sophie, while Soph was resting her head on his shoulder. Cuties!

The two later met up with Nick for dinner at Craig’s in Hollywood. They were holding hands as they walked in.

In May, Sophie shared the key to their successful high-profile relationship with InStyle.

Turner prefers keeping her relationships private, but there was one thing that made dating Joe "easy."

"I found it easier to date someone who understands the industry or is in that world," she explained.

"You [both] realize that you’re not going to see each other all the time. And you don’t feel like a jerk when you’re like, 'My publicist says I can’t do this…'"

In September, the couple were spotted with a new sign of commitment.

They were taking a walk in New York City with their new and adorable adoptee, a beautiful Siberian Husky.

One month later, in October, this popped up on both of their Instagram feeds:

After a whole year together, the pair got engaged! And Sophie was beginning to be seen with the pear-shaped ring everywhere she went.

A source told People that Joe's family were very happy to welcome Sophie. "Everybody’s very, very happy for them and their family and friends are all thrilled. Everyone loves them together," the source said.

"She’s young but is beyond her years and is crazy, crazy mature."

"He’s never been like this with a girl. He was such a dater before her but their relationship was much different from the start. She was just the one for him," they added.

Last year, Sophie admitted to Marie Claire, "I'm still like, Holy s--t! I'm engaged." "There's this weird misconception that being married is the greatest thing that'll ever happen to you. But I've always found that my career is something I work for, and when I achieve something, there's a sense that this is the greatest thing I'll do in my life," she added, according to E! News.

"It's lovely to be engaged."

"Not like I achieved anything, but I found my person, like I'd find a house that I love and want to stay in forever." What she added next is the reason we love Sophie.

She said, "There's a sense of peace that comes with finding your person."

"But there's a drive that comes with your career." No one could have said it better!

Now the couple have hit the headlines again. They got married in secret after last night's Billboard Music Awards!

After the Jonas Brothers' fiery reunion on stage, Joe wasted no more time and married Sophie in Las Vegas.

Billboard confirms that the couple tied the knot on Wednesday, May 1.

Billboard says all that three brothers (with the exception, of course, of the bonus Jonas) are now officially taken as Kevin Jonas married Danielle Jonas in 2009 and Nick Jonas married Priyanka Chopra in 2018. But it's no wonder that Joe and Sophie chose that particular night...

The brothers had just given an interview with Billboard and they revealed Jonas Brothers are well and truly, completely and totally back together again!

Then they gave their first live performance on stage in a long time; they performed "Sucker," Nick Jonas' "Jealous," and Joe Jonas’ (DNCE's) "Cake By the Ocean."

Two hours after the show, Joe and Sophie were at a wedding chapel in Las Vegas!

In the DJ's Instagram Stories, Sophie can be seen walking down the aisle in a white dress and veil!

An Elvis Presley impersonator was also there to officiate the ceremony, while Dan + Shay performed "Speechless."

The wedding was very intimate.

The only witnesses were a small group of friends and family that included Joe's brothers and singer, Khalid. Wondering what rings they exchanged in such a last-minute ceremony?

Ring pops! Because, who cares?

One fan wondered on Facebook, "Married her for the spoilers?" Highly unlikely - you don’t throw candy rings around like that just for little inside information.

After all, the bride's best friend and bridesmaid, Maisie Williams, wasn't at the chapel, it seems. Plus, Joe wants a rugby game wedding in France... He told The Late Late Show recently, "We're going to have a flag rugby game at the wedding, and a flag football game. So if all the groomsmen show up with black eyes and broken arms, I'll be very proud." Okaaaaay.
20%

$11.14 $8.91
Buy Now
See More Deals
We hope you find these deals as awesome as we do! Just an FYI: we may receive a share of sales from links on this page