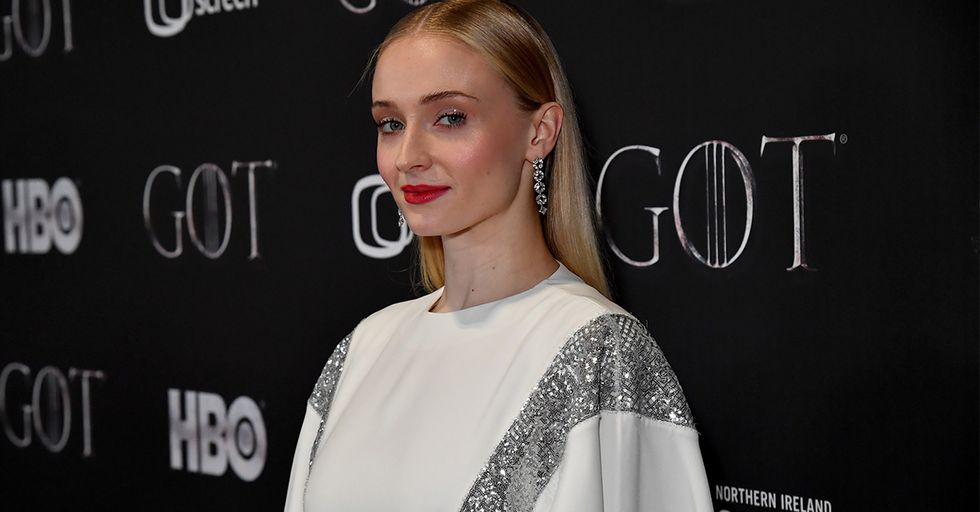 Sophie Turner Reveals She 'Used to Think About Suicide a Lot'

It's easy to look at young, beautiful celebrities and believe that they're the happiest people on earth. Seemingly, they have everything, and it's easy to forget that beneath the glitz and the glam, they're actual human beings. They have the same insecurities and struggles that any person has. But because they're famous and constantly in the public eye, it's easy to get caught up in the spectacle of fame and forgetting that they aren't robots.

Game of Thrones actress Sophie Turner recently revealed her struggle with depression while talking to Dr. Phil on his podcast, Phil in the Blanks. On the surface, it might seem that Turner is the last person that one would think would struggle with depression. But that's the thing about mental health: it's important for everyone. It doesn't matter how famous you are. It doesn't matter how rich you are. We're all human, and we all go through struggles.

Sophie Turner is a British actress.

She's best known for her role as Sansa Stark on HBO's iconic Game of Thrones. She's also Jean Grey in the upcoming Dark Phoenix, as part of the X-Men franchise.

Turner has pretty much grown up in the spotlight.

She started filming Game of Thrones when she was just 14-years-old. The role marked Turner's television debut.

She is an incredible actress, fully embodying the power of Sansa Stark.

She's also super active on social media, with an Instagram following of over 10 million.

Turner is also part of a high-profile relationship.

Turner and Jonas started dating in 2016.

In true millennial fashion (and because it's 2019), the pair initially met through an Instagram DM. Celebrities! They're just like us! They slide into each other's DMs!

It's basically the love story of our generation.

In an interview with Harper's Bazaar, Turner revealed their meet-cute was more of a digital meet-cute.

Turner explained they had a lot of mutual friends.

"We had a lot of mutual friends," she said in the interview, "and they’d been trying to introduce us for a long time. We were following each other on Instagram and he direct-messaged me one fine day, out of the blue."

As to be expected, Turner had to deal with some Jonas Brother fanatics.

When asked in the interview if Jonas' fans hate her, she replied, "Yeah, I guess so. It’s better now," she says. "His fans have gotten a bit older. If I’d been dating him during the years when he was appealing to the 14-year-old crowd, it might have been a bit more hostile."

Turner and Jonas have been in a relationship for over two years.

The pair got engaged in October 2017, after about a year of dating. They're really adorable.

Jonas even has a habit of dressing up like Sansa Stark...

"Why are you so embarrassing. We Stan. ????," Game of Thrones actress Maisie Williams commented on the photo.

And Turner even popped up in the recent Jonas Brothers music video for their single, 'Sucker.'

The couple that supports each other's projects together, stays together.

Turner is also super close to Priyanka Chopra and Danielle Jonas, who are married to the other Jonas brothers, Nick and Kevin.

They call each other the "J-Sisters" and it's very cute. Who wouldn't want to marry into this awesome family?

Turner is very active on social media, and recently opened up even more on Dr. Phil's podcast.

As a guest on the podcast, Turner opened up about her struggles with depression. She told Dr. Phil that she's dealt with depression since she was 17-years-old.

Turner talked about how she has been challenged with "learning to love herself."

During the interviewer, Turner explained that mean comments from hateful trolls about her appearance really affected her. (As they would anybody who isn't a robot).

Turner even talked to the GoT costumes department about making her corset tighter so she would look thinner.

"I would say, 'Yeah, I am spotty. I am fat. I am a bad actress.' I would just believe it ... I just got very, very self-conscious. I had no motivation to do anything or go out," Turner told Dr. Phil. "Even with my best friends, I wouldn't want to see them... I would cry and cry and cry. Just having to change and put on clothes, I said, 'I can't do this. I can't go outside. I have nothing that I want to do.'"

Turner confessed that having her co-star Maisie Williams go through the same thing was pretty hard for her.

"I think being friends with each other was quite destructive because we were going through the same thing," she said.

The pair are best friends and basically grew up together on the show.

"We would get home from set, go to a little supermarket across the road and just buy food. We'd go back to our room and eat it in bed. We never socialized for a couple of years," Turner said.

Even though they isolated themselves together, Turner and Williams turned to each other.

"She’s just a year younger than me and she and I were growing up together," Turner explained. "She was my best friend and she was the only one that I really told about all of it."

There has been an improvement, though.

"I love myself now more than I used to," Turner told Dr. Phil. She talked about how going to therapy and taking medication has helped her struggle with depression.

Her famous, rockstar fiancé, Joe. "I'm now with someone that makes me realize, you know, that I do have some redeeming qualities, I suppose," Turner told Dr. Phil.

Turner explained the dynamic of their relationship.

"When someone tells you they love you every day, it makes you realize why that is," she said. "I think it makes you love yourself a bit more."

Turner said that she used to think about suicide a lot when she was younger.

Turner explained that when she was younger, it was harder to see her friends at university while she was working.

"My friends were all going to university and I was working. But I was still living at my parents’ house, so I felt very alone," she said. "It only started to go downhill when I started to hit puberty and I was gaining weight. Then there was the social media scrutiny and everything — that was when it kind of hit me."

It doesn't matter if you're a famous actress on a hit TV show or not.

Often times, mental health takes a backseat to physical health. It shouldn't. We need to be taking care of our minds the same way we take care of our physical bodies.

Especially since she has such a huge social media following. But for every stupid troll who hates on her, there is someone who is inspired by her story.

Everyone deals with their own baggage in life.

You really never know what someone is going through.

There are a ton of resources for anyone who is struggling with depression or thoughts of suicide.

It's important to take time for yourself.

Self-care is vital to sustaining a healthy life.

By talking candidly about her struggle, Turner is helping to strip away the stigma associated with mental health.