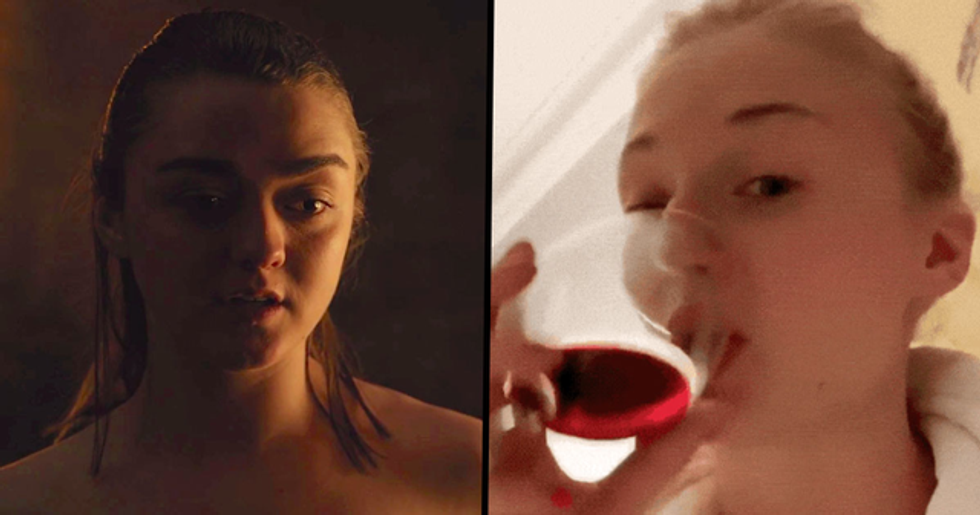 As Game of Thrones tragically draws to an end, it seems that the world cannot stop talking about it. But one scene, in particular, has really got the internet talking - including stars of the show themselves!

In Sunday's episode, we saw fan-favorite, Arya Stark, in ... let's just say, a compromising position. For a character that we're more used to seeing as a terrifying assassin, watching her reveal a softer side was, in equal parts, cute and disconcerting. The internet was pretty divided, with some totally digging the character's development, and others thinking that the whole sequence was nothing short of wildly inappropriate.

But now, someone else has weighed in on that Arya moment - someone with more authority on the subject than most. Sophie Turner, who plays Arya's big sister, Sansa Stark, posted her commentary on the scene on her Instagram stories - and her response is as unexpected as it is hilarious! Scroll down to see for yourself. Careful, there are spoilers ahead!

Game of Thrones is currently in the midst of its final season.

It's really become more than just a hit television show. In fact, it's something akin to a genuine cultural phenomenon.

It chronicles the struggles for power in a fictional land.

And although the setting is fantastical, the bulk of the stories are inherently and incredibly human, which is a major reason for the show's success.

Alongside political struggles, there are slightly more obvious threats to the land of Westeros.

For example, fire breathing dragons and a huge zombie army who are currently trying to invade Westeros.

One of the most popular families on the show are the Starks.

The northernmost residing of the noble families, the Starks are known for being inherently honorable and incredibly tough.

Which is not to say that they've had an easy ride.

The various Stark children have all faced their own personal Hells during the course of the show, although they seem to be in slightly better stead now.

Arya Stark is the youngest of the two daughters.

From her first appearance, it was clear that she wasn't your average young lady. She's always had a propensity for fighting and truly marched to the beat of her own drum.

Her relationship with elder sister, Sansa, hasn't always been rosy.

The Stark siblings often clashed as Sansa had a more traditional set of values than her rebellious younger sister.

But in real life, this couldn't be further from the truth.

Actresses, Maisie Williams and Sophie Turner are real-life BFFs and have a hilarious (and incredibly cute) friendship.

This interview is an absolute must-watch!

If you want to quickly and efficiently understand Turner's and Williams' dynamic, look no further.

The pair are clearly very close.

In fact, some credit their social media friendship as one of the reasons for the humongous growth of the television franchise.

During the course of filming, the pair have truly bonded.

They often have sleepovers during filming, and broadcast their antics on social media for everyone to enjoy.

In it, Arya Stark's friendship with blacksmith and illegitimate Baratheon, Gendry, was taken to the next level.

The couple had long been close.

But as Arya prepared herself for battle, she decided to take a leap and ask Gendry to take their friendship to the next level.

We'll leave the rest up to your imagination.

But let's just say, it was most certainly a divisive move on the part of the Game of Thrones writers.

There was one major reason for the controversy.

We've known Arya Stark since she was a little girl, so seeing her behave in such a grown-up way made some feel a little icky.

Shipping Gendry and Arya felt great in theory - but seeing it a practice made some a little uncomfortable.

Especially as it was so unexpected.

If you'd told us this spoiler earlier in the series, we're pretty sure we would have laughed.

Which is kind of silly, considering.

Arya has slit throats, gouged eyes out, witnessed the beheading of her father, baked men INTO A PIE, poisoned an en… https://t.co/rgXWQpOHkS
— Cabrel (@Cabrel)1555987893.0

Game of Thrones is pretty well known for slightly odd and uncomfortable sex scenes - plus, Arya has done far more shocking things in her time on the show.

This was probably the main issue.

Even though the character and actor are "of age" (Arya is eighteen and Williams is twenty-two), many still think of Arya (and Williams) as a kid.

But the couple have undeniable chemistry.

find yourself a partner who looks at you the way arya and gendry look at each other throwing big ole fuckin knives… https://t.co/tdeNtRpzDN
— emma lord (@emma lord)1555895542.0

And a good number of Game of Thrones fans were very much into the coupling.

For some, it was a long time coming.

While the relationship had always been platonic, it was clear that Arya and Gendry had always cared deeply for one another.

And, after all, it did seem like the right time.

Nothing like the threat of imminent death during a battle with an army of zombies to get you in the mood, right?

Overall, the internet seemed happy with the scene.

Once everyone got over their initial shock and discomfort, that is.

This weekend was also Easter.

The second episode of the eighth season of Game of Thrones came out on Easter Sunday.

A fact not lost on Sophie Turner.

She posted this hilarious reaction to her BBF's sex scene on her Instagram stories, pointing out that Easter may well have been the inspiration.

People could not believe what they were seeing.

Sophie seems a little bit buzzed in the impromptu video, but we have to respect her amazing comedic timing.

People suspected that she may have been a little tipsy.

We're not ones to speculate, but perhaps the glass of wine she downs at the end of the video may not have been her first.

Some hoped that the video would start a trend.

We've got our fingers crossed for more of these Sophie Turner reaction videos - and based on what we're thinking may happen next on the show, we're going to need them.

As one Twitter-user pointed out...

It seemed that, at the end of the episode, everyone was pretty happy and where they should be - which usually, in Game of Thrones world, means only one thing.

Everything is probably about to go very badly wrong.

But at least we'll have Sophie Turner's reaction video. And that's the tea.