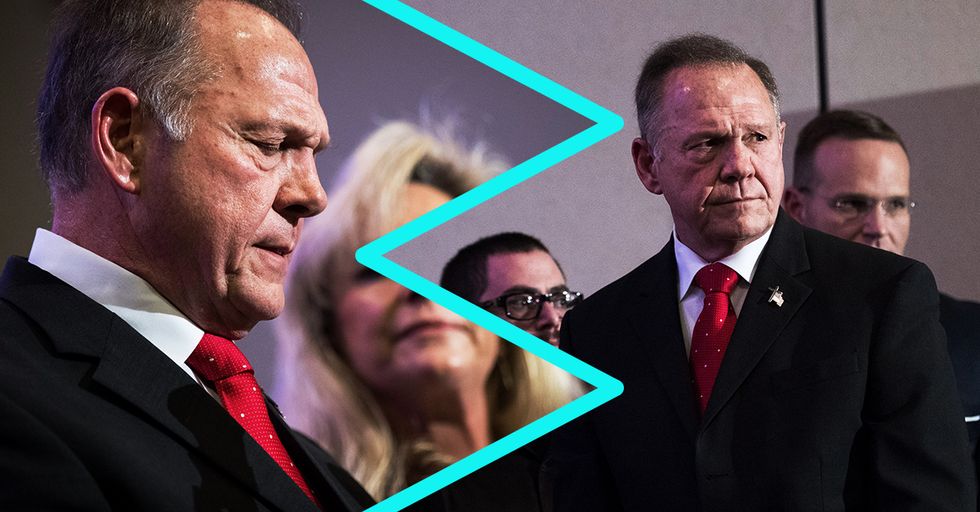 There's no doubt in anyone's mind that 2017 has been one of the most eventful years in U.S. government history — especially when it came to politicians screwing the pooch over and over and over again. There's been so much about Donald Trump in the news in the past few weeks that you may have forgotten about rotten ol' Roy Moore and the election for Alabama's seat in the U.S. Senate, which took place way back on December 12.

Well, Democrat and non-child-molester Doug Jones won that night, narrowly beating out confirmed child molester Roy Moore. And though it's been weeks since the election, Roy Moore has yet to concede. What a guy!

If you'll recall, Roy Moore is a child molester.

In a bombshell Washington Post report, several women accused him of assaulting and/or pursuing them when they were teenagers and he was in his 30s. One accuser, Leigh Corfman, was 14 when he, at 32, forcibly kissed her. Moore was actually banned from a shopping mall in Alabama in the 1980s because he had a reputation for bothering teenage girls. But none of this stopped him from running for the Alabama U.S. Senate seat.
Neither did his penchant for homophobia, racism, or anti-Semitism. The guy literally said that America was better when there was slavery, and people still voted for him.

Not enough people, though. Alabamans pulled through and voted to elect Doug Jones instead of a child molester on December 12.

At this point, that's all we can really ask for. It was an historic victory — Alabama had not elected a Democrat to the Senate in decades.

Doug Jones won, and it was time for Roy Moore (and the horse he rode in on) to hang their heads and concede.

Literally. Roy Moore literally rode to the polls on a horse. Her name is Sassy.

But Roy Moore isn't one to give up — even in the face of concrete evidence that he should do so. He refused to concede.

We all thought, "Oh Roy! He'll give it up in a day or two. He's just too busy being grumpy that his child-molesting past cost him a job. He'll come around and be reasonable because he's definitely done that before!" Oh, how wrong we were...

It's been weeks since the election, and Roy Moore has still refused to step aside.

At first, he sought a recount. Doug Jones won by about 20,000 votes, which is a slim margin, but not recount-slim.
Then, about a week after the election, Moore sent an email to supporters asking for donations to his "Election Integrity Program" that would investigate alleged "reports of potential voter fraud." The guy was getting desperate.

At this point, even Donald Trump said that Roy Moore should concede.

When you agree with Donald Trump, you know something is wrong. But Moore refused to take the advice of the president who endorsed him (who is also a sexual predator — funny how that happens).
On Wednesday, December 27, Roy Moore filed a lawsuit that tried to block state officials from declaring Doug Jones the official winner of the election. It really was pitiful. On Thursday the 28th, the court rejected his request to block certification of the election results, and Doug Jones was — despite Moore's best (read: sad, disgusting) efforts — certified the winner of the Alabama U.S. Senate race.
Roy Moore still hasn't conceded, and it's unclear if he ever will at this point. But props to the good people of Alabama (especially black women) for making sure that gently (or not gently), Roy Moore retreats into that good night.
20%

$11.34 $9.07
Buy Now
See More Deals
We hope you find these deals as awesome as we do! Just an FYI: we may receive a share of sales from links on this page